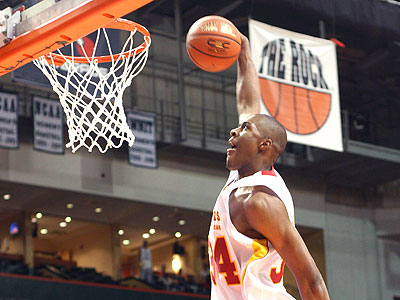 Richard Walker
@DraftExpress
Monday night we were on hand in Miami, Florida to witness six of the best players in high school basketball, and potential future NBA draft picks, at the

2009 McDonald's High School All-American Dunk Contest. This was another chance to try out our exclusive DX-Mo video technology so be sure to let us know what you think!

Going into it the consensus amongst the players was that Georgia Tech recruit Derrick Favors was the front-runner, but a steady performance by Avery Bradley, Jr. (Texas) allowed him to win in the finals over both Favors and Mason Plumlee (Duke).

Michael Snaer goes up for a dunk along the baseline and grabs the side of the backboard before throwing the ball down.

Abdul Gaddy of Bellarmine Prep (Tacoma, WA) lobs the rock from the three point line, spins and throws down.

Abdul Gaddy bounces the ball off the court, off the backboard and then dunks two-handed.

Derrick Favors of South Atlanta High School (Atlanta, GA) takes the ball out of John Henson's hand and does a big windmill dunk.

Mason Plumlee of Christ School (Arden, NC) follows a teammate who throws the ball off the side of the backboard and then dunks it.

Mason Plumlee throws a lob to himself before catching it with one hand, spinning and jamming the ball.

Avery Bradley of Findlay College Prep (Henderson, NV) throws a lob from the corner and then catches it, brings the ball down to his feet and throws down a reverse jam.

Avery Bradley throws a lob and then does a windmill jam.

Peyton Siva of Franklin HS (Seattle, WA) takes a pass off the backboard for the big dunk.

Peyton Siva runs the baseline and does a reverse jam.

Mason Plumlee does an homage to Vince Carter by jumping high enough to stick his arm into the basket and then hanging by his elbow.

Avery Bradley tosses the ball off of the backboard and does a windmill dunk.

Derrick Favors does a windmill dunk.

Mason Plumlee rocks the baby to sleep and then goes in for the two handed reverse jam.

Avery Bradley throws a lob from the corner and then throws down a 180 degree dunk.