A Historical Look at the NBA Pre-Draft Measurements 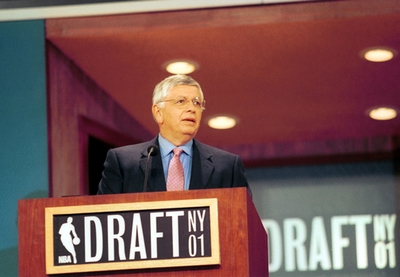 DraftExpress
@DraftExpress
At the annual pre-draft camp we find out how big players really are. Prior to a few weeks ago the only measurements available were from this decade, but the recent 90s measurements show us the actual measurements of established NBA all-stars and future hall of famers. Now you can see how Dwight Howard compares to Shaq, how Amare Stoudemire compares to Kevin Garnett, how Derrick Rose compares to Jason Kidd etc.

Its also interesting to look back and see how established players did after being questioned about their measurements, such as Elton Brand. This article will tell you about these measurements and what they mean.

The older pre-draft measurements added in the last few weeks have mostly been gathered from 1990s newspaper articles. Many of these numbers pre-date internet basketball sites, so it makes the numbers much tougher to find, and far more limited. Unlike today when the measurements are released in a complete list on the internet by the NBA, back then the only complete lists of measurements were found in media guides at the pre-draft camp. Aside from the rare article that would list most players measurements, the only measurements that were often listed were those that showed players a few inches off of their listed height. Thats why the lists are missing quite a bit of information.

Something you might notice is that up until sometime in the last 10-12 years, players were only measured without shoes at the main pre-draft camp. Players and various people who worked for teams had been complaining for years about barefoot measurements. Larry Johnson, the #1 overall pick in 1991 expressed his thoughts on the measurements after he came in an inch and a half below his listed height of 67. "Ain't that pitiful?" Johnson said. "You don't go out there with your shoes off. Ain't that right?"

In this case, Larry Johnson being a 65 ½ power forward didnt hurt his stock, because he was in a weaker draft, but many times measurements can really help or hurt a players position in the draft. Jerry Krause used the same logic in 1992, saying "I've never seen a young man yet play basketball in his stocking feet." That was after power forward Byron Houston, who was listed 67 in college measured 64.

However, that is clearly flawed logic, because with the in shoes measurements, players can show up with shoes much larger than the ones they actually play in in games. An example of this is 610 ½ Spencer Hawes, who showed up at the 2007 pre-draft camp with shoes that made him 70 ¾.

In 1999, for months leading up to the draft, rumors circulated about Elton Brands true height. Brand had always been listed at 68 or 69 in college, but many people didnt buy it. Wally Szczerbiak, another player from the draft class, said Brand was closer to 66, and the rumor was Brand was actually only 65 ½ barefoot.

Brand was viewed as a top 5 pick by most already, but many questioned if he was tall enough to play the power forward in the NBA. Only Larry Johnson and Charles Barkley had found success at the power forward position in recent years at around 66, and they possessed superior athleticism.

Brand however had been insisting he was measured 68 without shoes at Duke, and he was confident he would measure at that size again. Brand showed up to the camp and measured 68 ¼ without shoes, 69 ½ with shoes and with an amazing 75 ½ wingspan, and 92 standing reach. That showed he not only had more than enough length to play power forward, but enough to play some center too.

Jerry Krause explained that Brand had a short neck and that a long neck is wasted height in basketball. Brand in reality can play like a 611 player despite measuring just over 68. The Chicago Bulls then drafted Brand first overall, and he has had easily the best career of any player from that draft class.

While height can help or hurt a players stock, so can his weight. In 1992, Oliver Miller showed up at the Orlando Pre-Draft camp in April at 312 pounds, and was urged by the NBA to lose weight. He then showed up at the Chicago camp in June at 318 pounds and 22% body fat. It also didnt help that Oliver Miller was only 67 ½ and played center, but now 16 years later, he is remembered as a talented player who couldnt stay in shape.

Longtime NBA scouting director Marty Blake claimed Miller said the scale was broken, something Blake called "unbelievable." That was a good example of how immature Miller was a warning sign of how he would end up never maturing, in turn wasting a chance to have a great NBA career. The opposite of Oliver Miller in 1992 was Popeye Jones, who weighed 283 in Orlando and was also told to lose weight. Jones then showed up in Chicago 19 pounds lighter. Jones had a much longer and more successful career than Miller.

Of course leading up to the pre-draft camp you hear a lot of college measurements thrown around. College measurements can be pretty far off at times. For example in the early 90s at the pre-draft camp, a handful of players measured more than 3 inches below their listed height in college. Aside from Byron Houston who I mentioned above, there have been cases where players have measured even more off of their college listings. Mark Randall, who was listed at 611 in college, measured just 67 ½, and John Turner was listed 69, but measured only 65 ½.

International listings are supposed to be fairly accurate, mostly listed barefoot, and this may be true in some cases. Andrea Bargnani was listed at 2.09 Meters in Europe (610 ¼) and that seems to be accurate enough. Dirk Nowitzki was listed at 2.08 Meters, 2.11 Meters, 2.12 Meters(610, 611 and 611 ½) in Europe and he seems at least that tall. Dajuan Wagner who was listed 62 in the NBA and measured 60 ¾ at the pre-draft camp barefoot is listed 1.85 Meters in Europe which is roughly his barefoot height. So international listings appear to be accurate, although like every rule, there are exceptions.

Aside from Elton Brand, another player who plays much bigger than his measured height is Dwight Howard. Howard was measured just 69 barefoot, but he is able to dominate opposing centers. The reason is the length of his arms. His wingspan and standing reach are higher than most 7 footers. Here is a comparison between Dwight and Greg Oden.

You can see that because of Howards short neck and long arms he has virtually the same standing reach as a big center like Oden. Then you add in his 270 pound frame and 39 inch vertical leap and it becomes obvious why he can dominate the center position. I guarantee if you asked the casual NBA fan how tall Howard was theyd say 611 or 70 and would be shocked he is just 69. So even at 69, Howard is not an undersized center, he is a freak of nature.


On the subject of freaks of nature, I have to bring up Shaq. In 1992, Shaq measured 71 without shoes, weighed 303 pounds, recorded a 35 inch vertical and had his wingspan measured at 77. To put that in perspective, from the minute he entered the league and for the next 10 years Shaq was the strongest player, the most athletic big man, one of the tallest players, one of the longest players and one of the quickest big men. His body fat was measured at a surprisingly low 12.2% too. A 1992 St. Paul Pioneer Press article said he even had veteran team physicians in awe of his physical stature. 70, 255 listed Hakeem Olajuwon was so small compared to Shaq that he was estimated at 68, 235 after standing next to him.

Of course, off the chart numbers are only a very small part of what can make a player successful. A perfect example of this is Brad Millard. Millard measured 72 ½ barefoot, weighed 360 pounds, and had a 78 ½ wingspan at the 2000 pre-draft camp. You are probably saying to yourself who the hell is Brad Millard? Thats because he went undrafted and never made an impact in any league.

You may have also noticed the unofficial measurements. Here is what I think of each of the unofficial measurements posted from the 90s. Shawn Bradleys 75 ½ measurement from a private workout with the 76ers in 1993 seems accurate. Bradley could pass for a full 76 and nobody would question it, so if the 76ers were going to lie about his height, they probably would have claimed he was at least a full 76. Ray Allens measurement from 1996 appears to be a pre-draft measurement, but I think that the 65 measurement was more likely without shoes. Allen Iversons numbers seem accurate, but the source isnt as strong as the official numbers. The Spurs statement on Duncans height in 1997 was Duncan was listed at 6 feet 10 inches his senior year at Wake Forest. When we measured him at the pre-draft camp in Chicago, he was 6-11 1/2. The fact that he is 21 indicates that he might grow even more.

I personally believe this was exaggerated and Duncan in reality is more likely closer to 610 barefoot. There will be older measurements posted in the future in addition to the 2008 measurements, so keep checking [url=the measurement section.
Read Next...