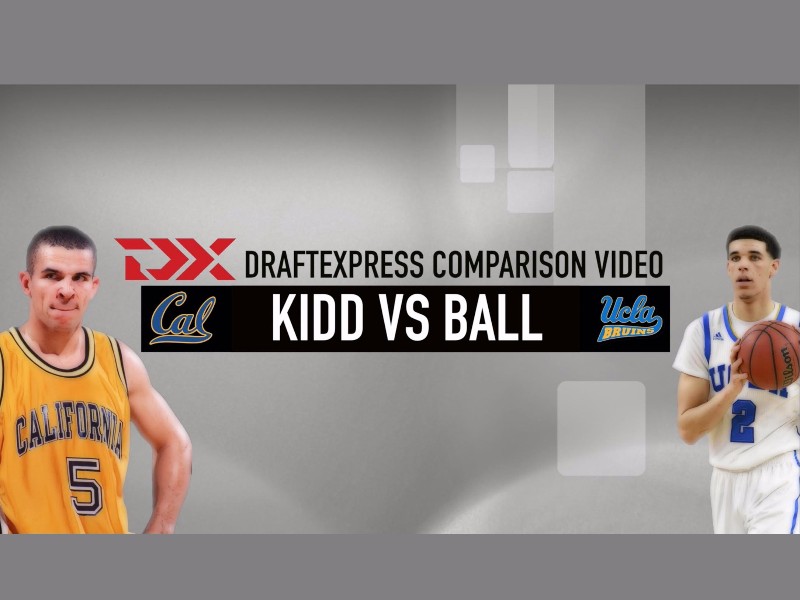 How Does Lonzo Ball Compare With Jason Kidd?

Mike Schmitz
@Mike_Schmitz
Kidd could very well be considered one of the greatest, most well-rounded pure point guards of all time. For Ball to be mentioned in the same realm as a prospect should be an honor for the Chino Hills native, and if he does go #2 (like Kidd in 1994) and comes anywhere near Kidd's ten All-Star appearances, 1995 Rookie of the Year award, 2011 NBA title, five First-Team all NBA selections, and overall 19 seasons of NBA service, his career will be a massive success.

Whether or not that happens remains to be seen, but Ball will certainly chart his own path in the New NBA', delivering entertaining basketball one outlet pass and step back three at a time.
Read full article

Eric Weiss
@DraftExpress
Overview:One of the best point guards in NBA history, a sure-fire hall of famer. 9-time All-Star. Named rookie of the year in 1995. 6-time first or second All-NBA team. 9-time all-defensive team. Has phenomenal size for the point guard position, to go along with an incredible basketball IQ. A triple-double waiting to happen. Drafted 2nd overall by Dallas in 1994, returned there 14 years later, likely to close out his career.

Offense: A floor general in every sense. Pass-first point guard who does an outstanding job of controlling the tempo of the game. Plays the game at his own pace, and makes everyone around him better. Vision, creativity are extraordinary. Excellent decision maker with tremendous poise and intelligence. Terrific in transition, and a master of the pick and roll. Sees over the top of defense and possesses incredible passing ability. A very good ball-handler with either hand, excellent at incorporating hesitation moves to keep defenders off-balance. Does not get to the free throw line at a high rate at this point in his career, and is a fairly poor finisher around the rim. Has clearly lost some of his explosiveness in recent years. Has never been known as an incredible scorer, much more comfortable as a passer. Has shot around 40% from the field for much of his career. A decent 3-point shooter, particularly with his feet set. Struggles knocking down shots off the dribble. Doesnt get much elevation on his jumper. Doesnt take all that many shots considering how many minutes he plays.

Defense: Considered one of the top defenders in the NBA for much of the past decade. Lateral quickness not what it used to be, but his combination of size, strength, timing, fundamentals and smarts still make him formidable in that regard. Defends multiple positions, 2s and sometimes even 3s, and is often more effective there at this point his career. Struggles staying in front of quicker, slashing guards. Has great hands and is excellent at getting in the passing lanes. One of the top rebounding point guards in NBA history.
Read full article