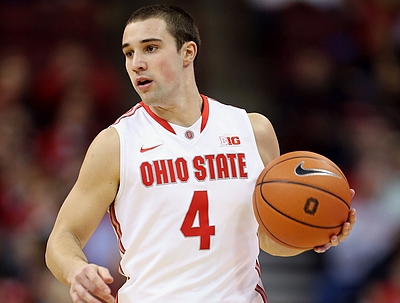 Aaron Craft's illustrious career came to a disappointing end with a round of 64 loss to Dayton in the NCAA Tournament, as he was unable to convert a tough runner at the buzzer to win the game for the Buckeyes. He will be an interesting case to follow through the draft process and beyond, as he doesn't have a typical NBA skill set, but he could earn a roster spot under the right coach and system.

Craft's value to a NBA team will start with his defensive ability, as he was one of the best defenders in college each of his four years, twice winning Big 10 Defensive Player of the Year. Despite his below average athleticism and length, sporting just a 6'1.5 wingspan, Craft's size, strength and lateral quickness should allow his defensive prowess to translate to the NBA. He harasses ball handlers on the perimeter and is active with his hands both when guarding the ball and in the passing lanes, as his 3.0 steals per 40 minutes pace adjusted ranked 5th among all players in our top 100 . Craft's quick feet and hands combined with his tireless work ethic should help him stay a competitive defender at the NBA level and gives him a fighting chance to latch onto a roster and stick in the right situation.

Throughout his four year career, Craft was basically the same offensive player year in and year out, never seeming to be able to add any new skills to his repertoire. The past two years, our preseason report suggested he would have to increase his offensive role after the departure of key offensive pieces in Jared Sullinger and DeShaun Thomas, but he has been unable to become a bigger part of the Buckeye offense. His 8.0 field goal attempts per 40 minutes pace adjusted was the second lowest of any player in our top 100 rankings, which was actually a decrease from 9.9 field goal attempts per 40 minutes pace adjusted in his junior season. He also did not see a rise in his assists, as his assists per 40 minutes pace adjusted were 5.6 in his senior season, right in line with the two previous seasons. Should Craft get drafted, he would be only the third collegiate point guard (besides Kendall Marshall and Chris Duhon) in the past twelve years to get picked with as low of a usage rate as he has. 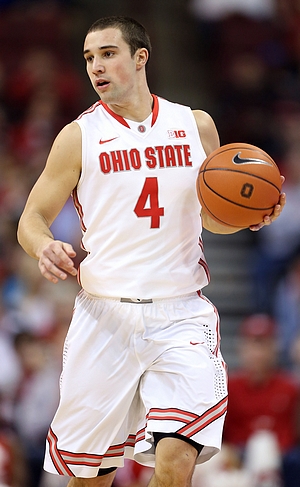 One area Craft will have to focus on to stick in the NBA is his ability to create out of the pick and roll. Craft has shown he can be a distributor in this area, but he often doesn't have a passing lane because the defense goes under the screen, daring him to take a jump shot. Craft looks uncomfortable shooting off the dribble (27% FG%), as he struggles to get balanced and has a slow release that will allow NBA defenders to recover and challenge the shot when they see him prepare to shoot. Craft took only 1.8 three point attempts per 40 minutes pace adjusted, third lowest among point guards in our top 100 . He shot only 30% on these three pointers, on par with the rest of his career and not high enough to make defenses guard him at this distance. If he doesn't develop a passable jump shot, it will be harder for him to stay in the league because defenses will not need to guard him in this area, making it harder for him to create for his teammates.

Craft is unable to beat collegiate defenders off the dribble on a regular basis and will likely continue to struggle with this skill against NBA level defenders. When Craft puts the ball on the floor, he puts his head down and tries to go straight to the rim. Since he was usually unable to get a step on the defender, he often found himself out of control which resulted in a turnoverhis 23% turnover percentage ranks tops amongst all Top-100 prospect point guards. Instead of barreling straight to the rim, he'll need to develop a more shrewd approach to try to beat his defender off the dribble when called upon to create offense.

After four years at Ohio State, it is clear what Aaron Craft can bring to a team as a NBA player. He will provide value defensively and improve a team's practices, lockerroom and chemistry with the hustle and toughness he brings to the table. To stick in the NBA, he will first need to find the right situation with a team that values the skill set he provides. He will then need to find a way to force defenders to have to respect him on the offensive end, likely with a more reliable jump shot, which will help open up scoring opportunities for his teammates.

Craft may not hear his name called in the Draft, but he should find his way onto a summer league team and earn invites to NBA training camp, where he can demonstrate his value as he tries to find the right opportunity. It will be a continuous uphill battle for Craft to make it and stick in the league, but landing with the right organization which values the intangibles he brings off the court could help his cause.
Read Next...