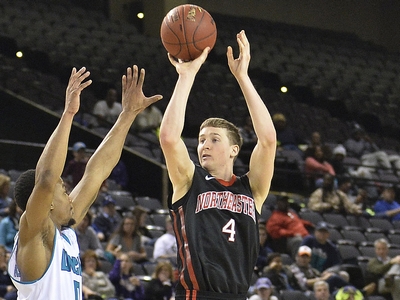 After leading his team to the NCAA Tournament as a junior and nearly knocking off Notre Dame, David Walker's senior season ended in disappointment without a postseason appearance. The combo guard did have a successful individual season, earning CAA All-Conference first team honors while scoring 18.3 points per game on a 63% true shooting percentage.

Walker has played both on and off the ball for stretches of time with Northeastern, although he was rarely charged with the task of bringing the ball up the floor. He was free to conserve his energy for the half-court offense and it's easy to envision a NBA team using him at either guard position. His 6'6 height and improved frame, up nearly 25 pounds from his freshman season, should allow him to compete against either backcourt position. Additionally, he is a plus athlete with a quick first step and impressive leaping ability.

With the ball in his hands, Walker excels at running the pick and roll and should be able to find success in this area as a professional. He displays good vision and uses his height to see over the defense to find his open teammates. He makes good decisions coming off the screen, either to pass to his defender or to step into a jump shot, and he made 39.1% of his jumpers off the dribble according to Synergy Sports Technology, a solid mark for these type of shots.

His assist production wasn't very high relative to other point guards at just 4.2 per 40 minutes pace adjusted. That's because he split his time with playing off the ball and this mark would actually be sixth among shooting guards in our top-100.

Off the ball, he's developed a reputation as a lights out shooter and his senior season saw him achieve a career high of 41.7% from beyond the three point line. With his height, he has no issue getting his shot off and his stroke is reliable, even showing NBA range. He shows a willingness to attack closeouts from time to time although he has some room to grow as a creator off the dribble without the use of a ball screen.

When working off the dribble in the open floor either by attacking closeouts or in dribble handoff situations, his first step is better than his top speed as he explodes into his move to get a step on his defender. He needs that initial space from his man as he doesn't have great ball handling skills or strength in traffic to slither through the paint. He has struggled to finish when he drives inside the arc and this was the first season he's converted more than 50% of his twos. He can't always get all the way to the rim, which forces him into difficult mid-range shots. When he is in the restricted area, he avoids contact instead of absorbing it to finish or draw a foul. His 5.0 free throw attempts per 40 minutes pace adjusted is below average for a point guard in our top 100. Even though he has bulked up throughout his college career, he'll need to add even more strength to be confident in seeking out contact in the paint.

This was especially true in his three highest profile games against Michigan State, N.C. State and Miami. In these matchups, he struggled to finish against the length of BCS conference defenders and his two point percentage dipped to 38.7% in this small sample.

There were too many times when Walker looked passive, despite being Northeastern's best offensive weapon and he was content to pass and watch the play develop. Part of that is due to their style of play, but a lot of that is due to his mentality as well. He wasn't aggressive enough to demand the ball when the team needed a big bucket and often leaves you wanting more relative to his talent-level. His 12.7 field goal attempts per 40 minutes pace adjusted was one of the lowest marks among all players in our top-100, and raises many question marks.

Walker will have the chance to prove himself in a new situation, whether that be at the Portsmouth Invitational Tournament if he accepts an invitation, individual workouts or the NBA Combine (if invited). Showing that he is willing to use his talent to be aggressive and impact the game consistently as he makes the transition to the professional ranks could go a long way in boosting his draft stock.

In these settings leading up to the draft, he'll also need to show what type of defensive player he can be since he was often in a zone over the past season. In the zone, he didn't foul much but that's because he often played with little intensity. He didn't initiate contact to show a competitive streak against cutters and would give up on the play when overmatched and outmuscled. Walker has shown some potential to guard multiple positions in the past and he has a baseline level of athleticism to develop into a plus defender, but he'll need to show that can translate to man to man settings, which is currently a major question marks.

Walker has some areas in which to prove himself in the pre-draft process, most notably his offensive aggressiveness and defensive intensity. With his height, athleticism, shooting ability, and potential as a pick and roll navigator, he'll no doubt get some serious draft consideration and could earn a spot on a roster.
Read Next...