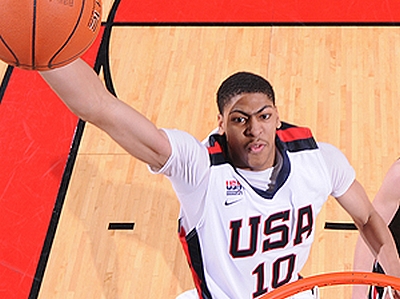 Jonathan Givony
@DraftExpress
After taking in the practices, scrimmages and actual contests at the McDonald's All-American game, Nike Hoop Summit and Jordan Brand Classic, we give one last update to the profiles of five of the best prospects in the 2011 high school class.

Adonis Thomas (#9 Scout, #15 Rivals, #8 ESPN) is one of the most improved players in this class relative to the last time we saw him in Germany. He's made noticeable improvements in his skill-level and his feel for the game, in turn establishing himself as one of the most promising prospects in the 2011 high school class.

Thomas is still the same incredibly impressive prospect physically, measuring nearly 6-7 in shoes at the Nike Hoop Summit with a near 7-foot wingspan. At 217 pounds, he comes into college ready to play from Day One. He's extremely physical in the post, can lock down positions 2-4 effectively and is an excellent reboundermaking him a very versatile player.

Where Thomas has progressed the most is in his spot-up shooting. He looks quite a bit more consistent with his feet set than we remembered him being. He has a compact, fundamentally sound stroke that will continue to get more consistent with repetition. Off the dribble, Thomas is not quite there yet, though. His accuracy drops considerably when pulling up.

As a shot creator, Thomas can beat his man off the dribble with a powerful first step. He can also finish through contact with his mature frame, particularly in transition, where he truly excels. He still has work to do on his ball-handling skills, though. He struggles to change direction and does not possess much in the way of advanced moves in half-court settings.

Thomas is an unselfish player with excellent intangibles. He's lauded not just for his on-court exploits, but also for academic prowess. He still has plenty of room to grow as a basketball player, particularly on the offensive end, but there's no reason to believe he can't reach his full potential down the road.

He looked substantially different in these settings compared to our first impression, where he was playing on a very weak high school team. Here his role was reduced and he was able to do what he does best: make plays around the basket.

His 7-4 wingspan (measured in Portland) and terrific athleticism allow him to make a huge impact on the defensive end in particular, the place where his presence will be felt the most at Kentucky. He plays extremely hard and is incredibly mobile on top of that. He has the ability to step out on the perimeter and contest shots effectively while also being able to rotate and establish himself as a shot-blocker thanks to his excellent timing.

Davis lacks the strength and girth to hold his spot on the block against heavier back-to-the-basket big men (something that might be an issue in the short-term), but his wide shoulders and solid base lead us to believe he will be able to fill out his frame in time.

Offensively, Davis is still a work in progress. He lacks a back-to-the-basket game, struggles to finish through contact, turns the ball over and generally does not have a great deal of polish.

With that said, he dropped enough glimpses of potential in the dozen or so opportunities we were able to evaluate him in practice, drills, scrimmages and games to lead us to believe he will develop in timeespecially with his jump shot.

Davis has good fundamentals in the post and on the perimeter as well as a strong feel for the game. It's only a matter of time until everything comes together for him. Even with his distinct lack of polish, he made a huge impact in every game we saw, mainly thanks to his desire to get out in transition, crash the offensive glass and finish emphatically around the rim.

Getting stronger and gaining confidence will be the keys for Davis moving forward, but we must remember his learning curve is steeper than other players in his class due to the unique growth spurt he experienced late in his high school career.

Combine his physical tools with strong fundamentals, competitive nature and a terrific attitude and it's easy to see why everyone is so excited about Davis' future.

James McAdoo's (#7 Scout, #8 Rivals, #5 ESPN) game is not particularly well-suited to the style of play often found in the all-star game setting, so it took a while for him to adjust. He ended up making a very strong impression in the Jordan Brand Classic, though, winning co-MVP honors.

McAdoo measured 6-8 ½ in shoes with a 7-1 wingspan in Portland. His body has slowly begun to fill out in the year since we last saw him. He now tips the scales at 223 pounds.

He has a well-proportioned frame with big shoulders and a solid base, leading us to believe he will end up looking like a classic NBA 4-man, with the skill-set and athleticism to match.

McAdoo is not a player who jumps out athletically on first glance. He appears to be in no rush to show how explosive he is. He's a smooth and highly fluid player with great coordination and mobility, though, and he will occasionally explode at the rim for a monster finish.

McAdoo's biggest virtues lie in his skill-level and his basketball IQ, which is extraordinarily high for a player his age. He can step out on the perimeter and create his own shot driving either left or right, and he has the ability to make shots with range out to the 3-point line, although he can't hit outside shots consistently quite yet.

In the post, McAdoo shows nimble footwork and an array of hook shots, step-throughs and turnaround jumpers, but he still needs to work on becoming a better (and more willing) finisher through contact. He rarely forces the issue and shows a high basketball IQ, which is particularly evident in his ability to find open teammates. His Tim Duncan-esqe demeanor and his willingness to fit into a team setting can at times be characterized as passive.

Defensively, McAdoo has the ability to step out and hedge screens on the perimeter and the length and athleticism to make an impact around the basket. He still needs to get tougher and more aggressive on this end of the floor, though. He needs to show more of an edge and put his physical tools to good use as a rebounder and defender, something that will become easier as his frame continues to fill out.

All in all, it's easy to see why McAdoo is such a highly regarded prospect. He has one of the highest floors of any player in this class. Still, he'll have to come off the bench next year for North Carolina, one of the most talented rosters we've seen in college basketball in recent memory. There should be plenty of room in UNC's rotation to get him minutes, though. He'll likely see time at both the 4 and the 5 alongside Tyler Zeller and John Henson.

Bradley Beal (#8 Scout, #7 Rivals, #4 ESPN)now stands 6-4 ½ in shoes, having grown an inch since the last time we saw him. He did little to diminish his status as arguably the top shooting guard in the 2011 high school class.

Beal shows a highly developed skill-level for a player his age as well as great maturity and an excellent basketball IQ. He is first and foremost an outstanding shooter, showing the ability to come off screens and make shots with deep range as well as pulling up smoothly off the dribble.

Beal creates shots intelligently and patiently with an array of change of speed and hesitation moves. He seems to prefer doing his damage in the mid-range area rather than taking the ball to the rim. Nevertheless, he will surprise you at times with an emphatic finish, showing an extra gear that you may not have expected on first glance. While clearly more of a shooting guard than a combo guard, Beal has solid court vision and can create for others within the flow of the offense. He rarely forces the issue and plays with an elegance and maturity that belies his age.

Defensively, Beal is highly competitive and fundamentally sound. He has a well-developed frame, which should ease his transition considerably to the college level. He's not the longest player in the world (6-7 ½ wingspan), but his size and strength allow him to guard either wing position, giving him the ability to play alongside Erving Walker and Kenny Boynton from Day One in Gainesville.

We were able to get a good look at Kentucky-bound point guard Marquis Teague (#6 Scout, #2 Rivals, #7 ESPN) over the last few weeks as he played in the McDonald's All American Game, Nike Hoop Summit, and Jordan Brand Classic. Teague continued to display his exceptional talents while also showing some of the weaknesses that we've noticed from watching him in prior events and tournaments.

The Indianapolis native stands out immediately with his excellent physical tools at the point guard position. Standing at 6'2 with a solid build, Teague also has tremendous speed and explosiveness that he can utilize to overwhelm opponents physically on both ends of the floor.

He's able to blow by his man and get into the lane off the dribble almost whenever he wants in isolation situations, and he's able to use his strength and elevation to finish well at the rim for a point guard. He's also tremendous in the open court, pushing the ball attacking the basket relentlessly, while also having the instincts to be able to dish off to the open man.

Teague's weaknesses come more into play in the halfcourt when he's asked to run a team and manage the game. We saw this especially in zone situations in practice and in the game a bit at the Nike Hoop Summit in Portland. He tends to take an extra dribble when he'd be better off just dishing off with a simple pass, and generally doesn't display great court vision.

Some of this of this can be attributed to his decision-making still not being on par with his talent level at this stage, and some can be traced to his inability to shoot consistently from the perimeter. He only shot two 3-pointers combined in all three of the games we saw and missed them both, and although he showed in practice that he can make them on occasion, he still has a ways to go as shooter. His mechanics are a bit inconsistent, and his shot a little flat, but his form doesn't need any major work, and he looks to have the potential to improve significantly with time and repetition.

Defensively, Teague has all of the tools to be outstanding with his combination of strength, lateral quickness, and intensity. He overwhelmed the guards on the World Team at the Hoop Summit at times, and he can be a factor at any level if he focuses on fundamentals and competing on every possession.

While Teague may not be considered a pure point guard at this stage, he does look like he wants to be more of a distributor, and his body language and overall demeanor seems to have improved considerably over the past year. It will be interesting to see how he's able to find a balance of getting his teammates involved and maintaining his attacking mentality. As he grows in that area and improves as a shooter, Teague's upside is fantastic, as point guards of his mold with supreme physical tools are very important in the NBA right now.

Looking to next year, Teague should have a chance to be next in the line of great point guards playing for Coach John Calipari, and he'll have plenty of teammates to utilize to help him enhance his individual talents.