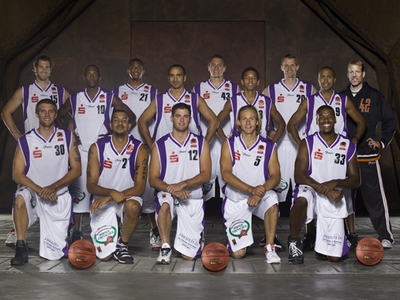 Joey Whelan
@DraftExpress
Michael Lewiss bestselling novel Moneyball tells of the Oakland As teams from the early part of the decade that were able to be a successful power in Major League Baseball despite a small payroll. The As front office and scouting personnel used innovative thinking and scouting techniques to identify players that would best fit their system while also proving to be a tremendous money saver. If Lewis suddenly decides to create a sequel, just with a slightly different twist, he may find it worth his while to board a plane for Europe.

In the heart of Germany, in the college town of Gottingen, there is a remarkable story unfolding on the floor of what once was a locomotive repair warehouse. The sounds of iron striking steel which used to fill the air in the Lokhalle (as the warehouse is known) has been replaced by the squeaks of rubber against hardwood, and the chatter of a full court pressure defense. After spending nearly a quarter of a century in obscurity and mediocrity, the local professional basketball club MEG Gottingen finds itself in first place in the German First Division, fighting for a championship in the midst of overwhelming odds. Perhaps most amazing of all is the man responsible for leading this seemingly rag tag team to the greatest heights of German professional basketball.

John Patrick is the definition of a basketball journeyman. The 41-year old coach played under famed college coach Mike Montgomery at Stanford from 1987-1991 and was the starting point guard on a team that won the 1991 NIT Championship. After graduating that spring, Patrick began a thirteen year odyssey of a professional career that took him to both Japan and Germany. During that span he also managed several tryouts with the Golden State Warriors, but never was able to crack the NBA. Patrick cut his teeth in the coaching business early on though when a case of jumpers knee forced him to take time off during his third year in Japan. He served as an assistant coach that year with the Japan Energy and would bounce between coaching and playing for the rest of his career as a player, a bizarre journey that has helped him immensely in his quest to teach the game.

It gives you a different perspective, he says. The bottom line is basketball isnt an art of perfection, its an imperfect science. What I try to keep in mind all the time is its a lot more of an art, and you need to keep playing.

The story doesnt really begin until Patrick left Japan one off-season to visit his then girlfriend (now wife) who was living in Gottingen. He fell in love with the quiet charm of the college town and decided if he ever got the opportunity to coach there, he would. He got his chance when he was named head coach of the franchise in 2003, at a time when competing for a championship in the first division was the furthest thing from anyones mind.

They have a great basketball tradition here, but I guess basketball was in hibernation. They had won the German championship twenty-five years ago, it was 1983. When I came to visit in 1996 for the first time they were just barely hanging on to staying in the second division. So there was this tradition, but no real program. I loved the city, and after we had our third child in Japan and after doing everything I could do there, I wanted to take a shot coaching here. I told the team I wanted to build a program and try to move up to the first league in a couple of years. They thought I was nuts.

Unrealistic or overly optimistic may have been more accurate phrases. Gottingen had the 14th lowest budget out of the 16-team second division, and hadnt been tremendously competitive in years when Patrick took over the reins in 2003. In order to achieve his goal of moving Gottingen to the top division, the team would have to finish in first place, as only the top team in the division was given the privilege to move up a tier. It didnt take very long for that to happen.

In just his third year with the organization, Patrick guided Gottingen to a 27-1 start, clinching the second division with still two months to go in the season. Playing an up-tempo style in which defenders pressure the ball almost non-stop for 40 minutes, Gottingen was able to run away from the rest of the league, scoring over 100 points per game and allowing just 78, the lowest total in the league. This 40 minutes of hell style, as its known in basketball circles, is a game that Patrick has been playing his entire life. He first learned it while playing at legendary basketball power Dematha High School growing up in Maryland, and continued to learn the ins and outs of this frenetic style of play when he played under Patrick Packy Ryan in Japan. Ryan played at the University of Hawaii in college where he was coached by Rick Pitino, a man who has made his entire career on playing full court pressure defense. Despite his love for the faster paced game, Patrick also realizes that he needs to play like this out of necessity.

Were given such a low budget, and you pay for every centimeter [of height] in Europe. You pay more for a good power forward versus a good small forward. You pay a lot more for a good center than you do for a good point guard; its just the way it is. We played in the second league with three and even sometimes four guards. It was a lot like how Missouri played this year. We full court press the entire game, and we cant do that with big guys.

Not that Gottingen has any big guys to speak of. The team has just three players on its roster that stand taller than 67, with the vast majority of players standing shorter than 65. This lack of size presents a major problem now that Patrick and his squad have moved to the first division, where the coach says they are giving up almost a full head in the frontcourt on a nightly basis.

Our starting center on a good day is as tall as I am, Patrick says with a laugh.

With a budget that is by far and away the smallest in the league, there isnt much of an option to bring in a taller roster. Gottingens budget for player salaries is one-eighteenth that of Alba Berlin, who own the largest payroll, and whom they currently lead by one game for first place in the league. The budget is so small that its currently several hundred-thousand dollars less than the next closest team in the league. The mindset on the team is simple though: dont focus on what we dont have, focus on what we do have. This mantra rings true not only for the coaching staff, but for the players as well. Guard Charles Lee, who played at Bucknell and spent time in Belgium, says the underdog role is a familiar one to most members of the team and it just motivates them to work harder.

Every game we are undersized, but it doesnt bother us because we are determined to outwork the other team. In order to make up for the size issue we use our speed and quickness to defend intensely and exploit mismatches on offense. Every day we have guys spending extra time in the weight room or on the basketball court. All of us have come from small colleges or small professional teams and know the challenges you face as the underdog. It doesnt bother us one bit, and we use it to push us.

Perhaps the reason behind the unexpected success of Gottingen lies in a cliché. Patrick says that during his practices the team spends almost as much time talking about the importance of being a team and looking out for one another, as he does on xs and os. Its a philosophy that extends beyond the court, where the players are provided with all the amenities necessary to make them feel more at home in their foreign surroundings. This includes the team arranging for the players to stay in brand new executive apartments and arranging for two meals a day at a nearby restaurant; little things that Patrick (recently named coach of the year in Germany) says arent often provided by many other teams overseas.

Of course, the biggest selling point for American players is the city itself. Gottingen is a small college town, not all that different from one you might find stateside. Everything is within walking distance, though the streets are ruled by bike riders, and the sidewalks are littered with restaurants to accommodate the influx of students who live in the area. Another positive of living in a young, vibrant city is the enthusiasm the residents bring to home games, something guard Kyle Bailey says is a major advantage to the team.

Our crowd definitely helps give us energy, he says. They are always into the game and very supportive of our efforts on the court. Our playing style and their enthusiastic support definitely make for an exciting environment in the gym.

Home games at the Lokhalle usually draw 3,000 fans, near capacity for the 120-year old facility; the acoustics of the building make for an exceptionally loud environment. Patrick says the interest level in the team is helped by the fact that Gottingen lacks a pro soccer team, or any other professional sports team to speak of, therefore the Lokhalle is almost always packed for games.

Its kind of like the old Boston Garden, theres just a lot of tradition and history there. Because its an event hall, we have to play most of our games on weekdays, and yet were almost filling this place up in a university town on Mondays, Tuesdays and Wednesdays. Its a great atmosphere; its one of our big advantages.

So there you have it: an undersized team of foreign players, coached by a foreigner in an ancient building meant for another purpose than basketball. Gottingens story has been told before in one way or another, but it never seems to lose its ability to teach the importance of determination and persistence. Perhaps Kyle Bailey is able sum up Gottingens philosophy best.

We give everything we have for as long as we can.