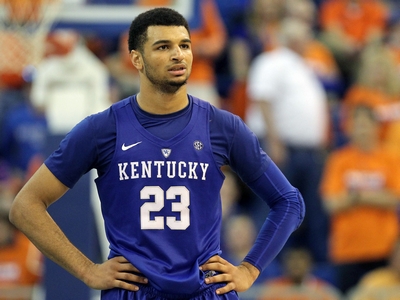 Playing nearly the entire season as an 18-year old, Jamal Murray had a very successful freshman campaign as Kentucky's go-to guy, ranking as the #1 scorer in the country among sub-20 year old prospects. His season ended in mild disappointment when the Wildcats were upset in the NCAA Tournament's Round of 32 at the hands of Indiana, though, with Murray having his worst outing in the 2016 calendar year, shooting just 7/18 from the field.

Murray's measurements have fluctuated throughout the years in the many different camps and events he's taken part in, with his lowest actually coming this past fall at the Kentucky Combine, at 6'3 without shoes with a 6'6 ½ wingspan and an 8'1 standing reach. He has an average combination of height, length, frame and athleticism for a guard prospect, not being particularly impressive in terms of his quickness or vertical explosiveness either.

Murray's skill-level and aggressiveness is what separates him from your average guard (particularly for a teenager), and that starts with his capacity as one of the most prolific shooter/scorers in the college ranks. His jumper is a finely tuned weapon that has been honed through thousands of hours of repetition in the gym, and he hit 41% of his 3-pointers on a huge volume of attempts (nearly eight per game). His stroke is compact and repeatable, getting good elevation to create separation from the defense, to go along with an unlimited confidence in his ability to make shots from anywhere on the floor.

Murray was magnificent as a spot-up shooter for Kentucky, but was particularly impressive coming off screens, as no player in college basketball even came close to delivering the accuracy he did (42/75, 56%) running off picks this season. He does an incredible job of moving off the ball with exquisite timing, and then catching, setting his feet and getting his shot off in one quick and smooth motion, with tremendous balance and body control. He is capable of contorting his body and throwing the ball in the basket from the most awkward of angles, with phenomenal touch and feel.

Murray's scoring instincts also show up in the way he changes pace in the open court and attacks closeouts with excellent footwork and timing. While not a high flyer, he uses the glass craftily in traffic with runners, floaters and off-hand finishes. He's stronger than he looks on first glance, and has a good feel for drawing fouls, pushing off defenders subtly, and finding ways to put points up more effectively than you'd think considering his average tools.

A major question NBA teams will have is whether Murray can develop into a combo, or even a point guard as time moves on. He averaged more turnovers than assists this season, and the track record of players who did so in college is decidedly mixed in terms of making that transition, with Gilbert Arenas, Eric Bledsoe and possibly Isaiah Canaan the only ones we can find with a similar or worse ratio in college that found success.

Murray shows some potential in drive and dish situations passing with either hand or moving it ahead in transition, as he has a good feel for the game and doesn't appear to be a selfish player. With that said, he's undoubtedly a player who appears most comfortable looking for his own offense, and does not appear to have great court vision. He tends to go into iso-mode a little more frequently than you'd hope, over-dribbling badly and throwing up incredibly difficult shots.

While dropping glimpses of his tremendous scoring instincts throughout the year, Murray was far from impressive with the ball in his hands, or as a scorer inside the arc overall, as reflected in his 50% 2-point percentage. He converted just 49% of his field goal attempts in transition situations according to Synergy Sports Technology, as well as 36% in isolation situations and 38% in pick and rolls.

Murray's average first step makes it difficult for him to turn the corner and create high percentage shots inside the paint against better defenders, as he relies heavily on overhandling and pushing off to gain an advantage, leading to a barrage of difficult pull-ups and floaters. While he was exquisite shooting the ball with his feet set as a freshman (46%--SST), he hit a middling 32% of his pull-up jumpers, which is a difficult way to make a living.

His struggles creating high percentage offense, combined with his average ability to play-make for others, will likely cause for somewhat of a transition to the NBA, where everyone is much bigger, longer and more athletic.

Defensively, Murray will also require an adjustment period in making the step up to the NBA level. He was somewhat of a traffic cone early on in the season for Kentucky, but he did learn how to be more fundamentally sound and competitive as the year moved on. Still, he tends to be somewhat upright in his stance off the ball, does not possess great length or lateral quickness, and has a tough time getting a hand up and contesting shots effectively against similarly sized or bigger opponents. Who he can guard (and what type of guard he shares a backcourt with) will play a huge role in his ability to make an impact early on in his career.

Analytic-types won't like the small number of blocks and steals Murray averaged this season, a reflection of his average tools, but to Murray's credit, he is intelligent and tough and found ways to adapt even if there are far fewer places to hide in the NBA than there were in college.

Murray is somewhat of a controversial prospect, as his lack of athleticism is not what you typically find in a guard prospect projected to be picked in the top five to seven spots in the draft. His scoring instincts are off the charts, though, particularly for someone his age, which makes it difficult to rule out significant future improvement despite his struggles in many key areas this season. Murray's competitiveness and overall intangibles, wanting the big shots, having the utmost confidence in his abilities, and being able to find ways to put the ball in the basket at every level he played at, make him seem like the type of guy who will find a way to exceed the sum of his parts, even if there's no question he will need to be put in the right situation to do so.
Read Next...