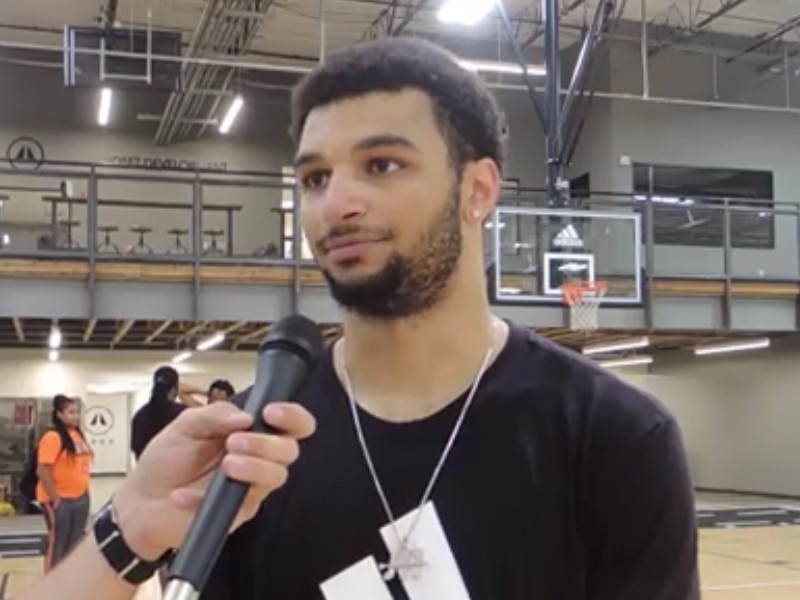 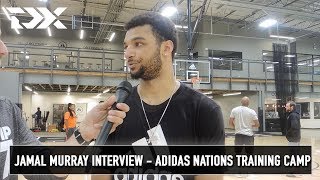 Playing nearly the entire season as an 18-year old, Jamal Murray had a very successful freshman campaign as Kentucky's go-to guy, ranking as the #1 scorer in the country among sub-20 year old prospects. His season ended in mild disappointment when the Wildcats were upset in the NCAA Tournament's Round of 32 at the hands of Indiana, though, with Murray having his worst outing in the 2016 calendar year, shooting just 7/18 from the field.

Murray's measurements have fluctuated throughout the years in the many different camps and events he's taken part in, with his lowest actually coming this past fall at the Kentucky Combine, at 6'3 without shoes with a 6'6 ½ wingspan and an 8'1 standing reach. He has an average combination of height, length, frame and athleticism for a guard prospect, not being particularly impressive in terms of his quickness or vertical explosiveness either.

Murray's skill-level and aggressiveness is what separates him from your average guard (particularly for a teenager), and that starts with his capacity as one of the most prolific shooter/scorers in the college ranks. His jumper is a finely tuned weapon that has been honed through thousands of hours of repetition in the gym, and he hit 41% of his 3-pointers on a huge volume of attempts (nearly eight per game). His stroke is compact and repeatable, getting good elevation to create separation from the defense, to go along with an unlimited confidence in his ability to make shots from anywhere on the floor.

Murray was magnificent as a spot-up shooter for Kentucky, but was particularly impressive coming off screens, as no player in college basketball even came close to delivering the accuracy he did (42/75, 56%) running off picks this season. He does an incredible job of moving off the ball with exquisite timing, and then catching, setting his feet and getting his shot off in one quick and smooth motion, with tremendous balance and body control. He is capable of contorting his body and throwing the ball in the basket from the most awkward of angles, with phenomenal touch and feel.

Murray's scoring instincts also show up in the way he changes pace in the open court and attacks closeouts with excellent footwork and timing. While not a high flyer, he uses the glass craftily in traffic with runners, floaters and off-hand finishes. He's stronger than he looks on first glance, and has a good feel for drawing fouls, pushing off defenders subtly, and finding ways to put points up more effectively than you'd think considering his average tools.

A major question NBA teams will have is whether Murray can develop into a combo, or even a point guard as time moves on. He averaged more turnovers than assists this season, and the track record of players who did so in college is decidedly mixed in terms of making that transition, with Gilbert Arenas, Eric Bledsoe and possibly Isaiah Canaan the only ones we can find with a similar or worse ratio in college that found success.

Murray shows some potential in drive and dish situations passing with either hand or moving it ahead in transition, as he has a good feel for the game and doesn't appear to be a selfish player. With that said, he's undoubtedly a player who appears most comfortable looking for his own offense, and does not appear to have great court vision. He tends to go into iso-mode a little more frequently than you'd hope, over-dribbling badly and throwing up incredibly difficult shots.

While dropping glimpses of his tremendous scoring instincts throughout the year, Murray was far from impressive with the ball in his hands, or as a scorer inside the arc overall, as reflected in his 50% 2-point percentage. He converted just 49% of his field goal attempts in transition situations according to Synergy Sports Technology, as well as 36% in isolation situations and 38% in pick and rolls.

Murray's average first step makes it difficult for him to turn the corner and create high percentage shots inside the paint against better defenders, as he relies heavily on overhandling and pushing off to gain an advantage, leading to a barrage of difficult pull-ups and floaters. While he was exquisite shooting the ball with his feet set as a freshman (46%--SST), he hit a middling 32% of his pull-up jumpers, which is a difficult way to make a living.

His struggles creating high percentage offense, combined with his average ability to play-make for others, will likely cause for somewhat of a transition to the NBA, where everyone is much bigger, longer and more athletic.

Defensively, Murray will also require an adjustment period in making the step up to the NBA level. He was somewhat of a traffic cone early on in the season for Kentucky, but he did learn how to be more fundamentally sound and competitive as the year moved on. Still, he tends to be somewhat upright in his stance off the ball, does not possess great length or lateral quickness, and has a tough time getting a hand up and contesting shots effectively against similarly sized or bigger opponents. Who he can guard (and what type of guard he shares a backcourt with) will play a huge role in his ability to make an impact early on in his career.

Analytic-types won't like the small number of blocks and steals Murray averaged this season, a reflection of his average tools, but to Murray's credit, he is intelligent and tough and found ways to adapt even if there are far fewer places to hide in the NBA than there were in college.

Murray is somewhat of a controversial prospect, as his lack of athleticism is not what you typically find in a guard prospect projected to be picked in the top five to seven spots in the draft. His scoring instincts are off the charts, though, particularly for someone his age, which makes it difficult to rule out significant future improvement despite his struggles in many key areas this season. Murray's competitiveness and overall intangibles, wanting the big shots, having the utmost confidence in his abilities, and being able to find ways to put the ball in the basket at every level he played at, make him seem like the type of guy who will find a way to exceed the sum of his parts, even if there's no question he will need to be put in the right situation to do so.
Read full article

DraftExpress
@DraftExpress
Measuring a bit smaller than he has at previous events at 6'4.25 with a 6'6.5 wingspan and a 207-pound frame, Jamal Murray has similar size to Rodney Stuckey, who measured 6'4.5 in shoes with a 6'6.25 wingspan and a 207-pound frame in 2007. For a player who isn't often noted as being overwhelmingly explosive, as is better known for his terrific skill-level, Murray's 39.5 inch maximum vertical leap is impressive.
Read full article

Mike Schmitz
@Mike_Schmitz
Murray came out firing early and didn't slow down as the game progressed, going for a game-high 30 points and five assists on 12-for-23 shooting and 3-for-7 from three. The 6' 5 versatile guard from Kitchner, Ontario showed the entire package on Saturday. He knocked down shots with range both off the catch and the dribble, carved up the Team USA defense with crafty change of direction dribbles, and finished creatively in traffic both in the half court and transition. 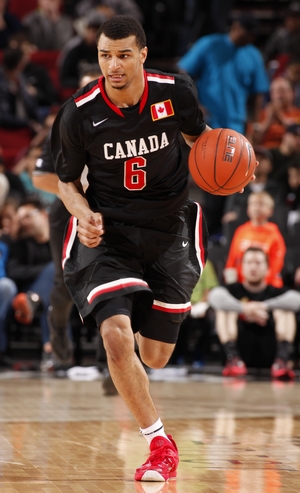 Murray certainly wasn't perfect, as he made a couple of crucial turnovers toward the end of both halves, missed a layup with 17 seconds left and the World Team up three that he probably should have pulled out to run clock, and showed a tendency to over-dribble in the half court, having to heave up a tough jumper at the end of the clock.

But overall he was absolutely stellar, showing his ability to play both guard spots and score from all three levels effectively. Murray's skill set has really evolved since the 2014 Nike Hoop Summit, a game where he played fairly well scoring 10 points on 4-for-8 shooting while grabbing five rebounds and dishing five assists.

At this point last year Murray was predominantly a spot up shooter who could handle a little bit in small doses, but didn't have much in his arsenal in terms of shot-creation and ball-skills. The game was a bit too fast for Murray and his lack of elite athleticism was clear. But after a year of seasoning Murray was the best player on the floor on Saturday against a US Team loaded with high-level guards.

All week long we harped on the stellar guard play of the US Team, but when the lights came on it was Murray who stole the show. The 2016 guard is currently uncommitted, but said Saturday that he's going to consider reclassifying to the 2015 class.
Read full article

Jonathan Givony
@DraftExpress
Fairly quiet in the first two days, Jamal Murray came alive today, showcasing his extremely impressive skill-level that has him ranked as one of the top guard prospects in the 2016 high school class. Murray is clearly more comfortable at this stage with the ball in his hands, as he tends to get quiet and somewhat passive when he isn't the focal point of the action. Playing a heavy ball-handling role, Murray made some slick passes out of the pick and roll, a beautiful turnaround jumper in the post, and a series of gorgeous floaters from the free throw line area. He capped that off with an open 3-pointer and even hit a miracle half-court buzzer-beater to finish off the scrimmage, putting an exclamation point on what was a terrific all-around performance. 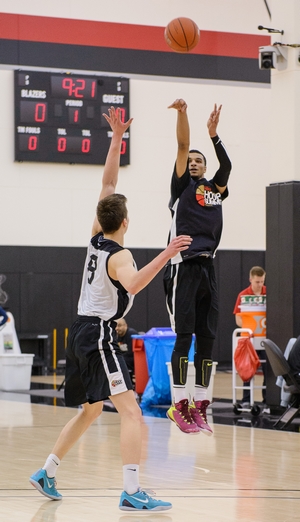 While not an exceptional athlete, Murray is extremely smooth and does a terrific job of playing at different speeds, relying more on his high skill-level and strong feel for the game. He shows the ability to make some creative passes, and is relatively active and competitive on defense, which helps considering he doesn't have tremendous length with his 6-7 wingspan and especially his 8-2 ½ standing reach, relatively average for either guard spot. Talking to Murray, he had absolutely zero interest in discussing the topic of which class he will end up in, instead preferring to thoughtfully talk about a variety of issues revolving around Canadian basketball, the path he's taking as somewhat of a trendsetter in his home country, and his own personal growth as a player. We will release that interview in the coming days.
Read full article

-Jamal Murray possesses excellent size for a player who can play a bit of point guard. He's almost exactly the same size as Austin Rivers, who measured 6'5 in shoes with a 203-pound frame and a 6'7 wingspan coming out of Duke. His standing reach of 8-2 ½ is certainly on the small side, even if his overall dimensions are similar to those of Kirk Hinrich for example.
Read full article

Jamal Murray at the 2015 NBA Basketball Without Borders Global Camp

Murray was arguably the top performer at the Camp, impressing with his improved playmaking ability and defense to go along with his outstanding scoring instincts and deep shooting range.

Matt Williams
@DraftExpress
-Canadian swingmen Jamal Murray and Justin Jackson are two of the country's top rising talents. Murray made an impression at the 2013 Jordan Brand International game scoring 24 points before getting an invite to last year's Nike Hoop Summit. A scoring guard with a terrific jump shot, rumors continue to swirl that Murray will reclassify from the class of 2016 to the class of 2015 and play college basketball next season. Murray isn't a particularly impressive athlete or defender, but highly fluid guards who can put points on the board in bunches from the perimeter like him are very much en vogue these days, and Murray has the scoring instincts and smarts to compensate for his limitations.
Read full article