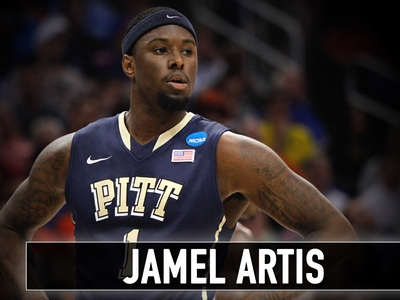 Julian Applebome
@jlapplebome
Julian Applebome takes a look at Pittsburgh Panthers senior wing Jamel Artis, and how is strong play of late might vault him into the NBA Draft Conversation.

Artis, a senior out of Baltimore, Maryland, has had a very strong year under first year head coach Kevin Stallings and is coming off a huge 43 point performance vs. Louisville. He currently leads the ACC in scoring at 22.4 points per game and is second in 3-pointers made at 2.9 per game.

Artis' 3-point percentage has taken a dramatic jump from last season and he is currently shooting 46.3% on 6.4 attempts per game. What makes Artis intriguing as a pro prospect is his versatility as a scorer and his ability to handle the basketball at 6'7 and 215 pounds.

If he can continue to shoot the ball consistently, develop further as a playmaking wing, and use his size more effectively on the defensive end, Artis has the tools to be in the discussion as a potential 2nd round pick in the upcoming draft, despite the fact that he's already 24 years old without standout length, athleticism or defensive prowess.
Read Next...