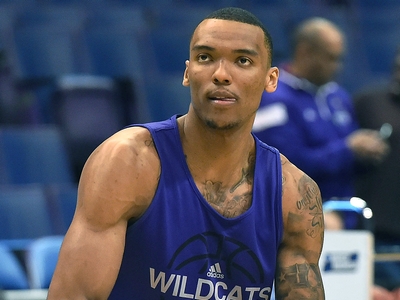 A once unheralded high school recruit, senior Joel Bolomboy was able to lead his Weber State team to the NCAA Tournament for the second time in his career. He racked up individual accolades as well, by being named the Big Sky Conference's Player of the Year and Defensive Player of the Year. Bolomboy shouldered a much bigger share of Weber State's offense this season, seeing his usage rate rise significantly, but still managed to improve his efficiency, as well as his defensive rebounding numbers.

Bolomboy has progressed as a draft prospect since we started tracking him after his sophomore season. He has developed physically and remains one of the top athletic big men in the country, filling out his 6'9 frame nicely. He hasn't made dramatic strides in his skill-level, but has improved enough to keep his name on draft radars.

Offensively, Bolomboy was mainly a back to the basket threat for Weber State, with post-ups accounting for 34.5% of his possessions logged by Synergy Sports Technology. He found a good amount of success with this part of his game this season, scoring well over a point per possession in these situations. While able to assert his will regularly on low-major competition with his terrific frame, it is difficult to see a NBA team dumping the ball into the post and asking him to play one on one. He'll need to continue to work on his skill-level, as his footwork and countermoves are fairly rudimentary, and he struggles when he can't simply overpower opponents.

He has become more of a willing and capable passer in his senior season and while he is still not stuffing the stat sheet with assists, he has seen his assist percentage rise from a paltry 5.9% as a junior to a more acceptable (but still not extraordinary) 7.9% as a senior. While his feel for the game seems to be improving gradually, he still has a tendency to miss open teammates. His passes seem to be more of a creation of going through his checkdowns then displaying any measure of vision in the post. He has a tendency to be robotic with his passes with many of his kickouts going to the man closest to him or to the opposite corner, so while this has helped create open opportunities, he still misses open cutters through the paint or on the baseline, as he doesn't have the vision to see the whole floor.

His turnover rate also fell this season, from a sky-high 20.2% as a junior to a more manageable 17.1% as a senior. His passes aren't always on target and his footwork isn't strong in his face-up game, which leads to traveling violations. He hasn't improved much in reading the defense, often making his move right into the teeth of a double team or too close to the baseline. While he won't be asked to be an offensive creator at the next level, NBA teams may point to these struggles when questioning his feel for the game after four college seasons.

Where he excels offensively is roaming the baseline and looking for dump-off passes or offensive rebounds he can dunk. He is an above the rim player with explosive leaping ability and a quick second jump to help him convert offensive rebounds. He's an elite finisher around the rim, converting 69% of his half-court attempts inside the paint according to Synergy Sports Technology, and 71% of his transition opportunities. He moves well from side to side and if he can show he can find the open passing lanes to receive passes off penetration, his offensive role becomes clearer.

Although Weber State didn't use him in pick and rolls on a regular basis, he was showcased in this role often enough for him to show his potential. He has a decent feel as to when to roll to the rim and when to pop out for a jump shot, but that decision making process still has room to improve. His jump shooting ability may be one of the most intriguing parts of his game, although it's still unclear whether he can become a reliable jump shooter at the next level.

Bolomboy didn't start shooting jumpers until his junior season, and finished his career a respectable 36/97 (37%) from beyond the arc, which is a small sample size even when just considering the past two years. He has the confidence to shoot from the outside, but his form is holding him back from becoming an even more consistent shooter. He has a hitch at the top of his shot that affects his release point, and without some overhaul to his mechanics, it is difficult to see him stretching defenses at the NBA level. Bolomboy obviously has some touch, though, so with more work in the gym and improved mechanics, this could become a more consistent part of his repertoire, which would be huge for his chances of sticking in the league long term.

Defensively, Bolomboy has significant potential, but is still somewhat of a work in progress. He doesn't always make the impact you would like him to considering his tremendous physical tools, as his defensive awareness is below average, especially for a senior. He can be a step slow to rotate over to help his teammates or will get screened too easily. Despite his quickness, explosiveness and length, he blocked only 1.4 shots per 40 minutes pace adjusted, which is concerning at the level of competition he played at.

With that said, Bolomboy's combination of strength, quickness, length and explosiveness, combined with his motor, is a very interesting combination, one that isn't that easy to come by these days. He'll have a lot of ground to cover early in his career to get up to snuff of NBA rotations and concepts, but if he's willing to put the work in, and receives the proper instruction, you can't rule out him picking things up, since there are no questions about his work ethic.

Bolomboy does have one specific skill that could very well earn him a spot on a NBA roster. He is the best defensive rebounder among power forwards in our top 100 prospect rankings at 11.5 per 40 minutes pace adjusted. He combines very good instincts for pursuing loose balls with terrific physical tools, and has a huge competitive streak for throwing his body around with reckless abandon.

Bolomboy is the type of competitive, athletic and high character big man NBA teams typically covet off the bench, even if there are some concerns about his basketball IQ and offensive limitations. Making the jump from the Big Sky conference to the NBA, he will have to show he can adjust to the speed and intricacies of the game. His physical tools will give him a chance to showcase his potential in the pre-draft process and if he can address those concerns, he'll have a better chance of hearing his name called come draft time.
Read Next...