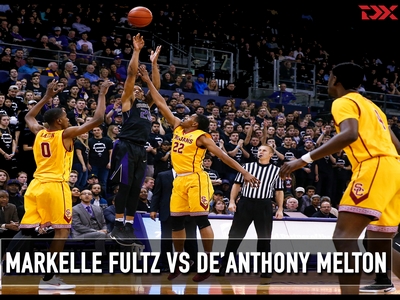 Both Freshmen guards put up impressive individual stat Lines, but it was Melton and USC who came away with the win on the road.

Fultz continued to show dynamic offensive ability, scoring the ball from all over the floor including hitting four of his eight 3-point attempts. He missed a couple shots down the stretch that could have kept Washington in the game, but overall showed the total package on both ends of the floor that should have him being selected with one of the very top picks in the upcoming draft.

Melton, an 18 year old freshmen out of Crespi Carmelite High School in Los Angeles has come on strong as of late, showing impressive versatility on both ends of the floor in Pac 12 play. At 6'4" Melton has excellent size at the point guard position and has really been able to impact the game on the defensive end of the floor. He finished with 6 steals, 2 blocks, and had some very impressive individual moments defending Fultz one on one. His offensive game is still a work in progress but he has shown great promise as a playmaker while his ability to score the basketball is still improving.