Moe Harkless: "I'm Going to Surprise a Lot of People" 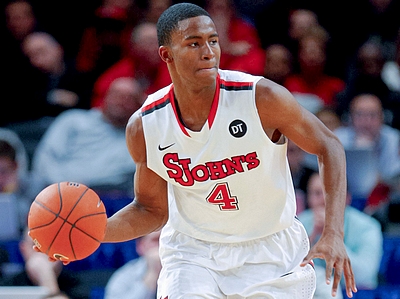 Kyle Nelson
@KNelsonDX
An interview with St. John's freshman Moe Harkless, discussing his training regimen in Florida, his rapid ascent this season, his perimeter shooting ability, the transition from high school to college and now the NBA, and more. 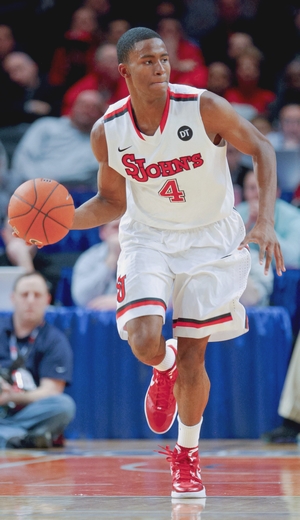 Kyle Nelson: Thank you for your time, Moe. How is everything going?

KN: Where are you currently working out for the draft?

Moe Harkless: I'm working out down at IMG in Florida.

KN: Who are you training with down there?

Moe Harkless: On the court, I'm training with Dan Barto, as well as strength coaches and speed coaches. There are a lot of different trainers down here.

KN: Can you tell me more about your pre-draft workout routine? Tell me about an average Moe Harkless training day.

Moe Harkless: I wake up in the morning around 7:45 and go to eat breakfast. Then, the first thing to do is check with a trainer every morning and get weighed-in and if you have any injuries or anything then you get treatment. Our first workout is on the field. It's movement and speed training from nine until 11. Then, we go on the court from 11:30 until 12:45 or one o'clock and work on ball handling and stuff on the court, basically. Then, we eat lunch and normally we'll be back around four o'clock for mental training and vision training. Then, at five o'clock we have weights and at 6:30 we are on the court again until 7:45 or eight o'clock. After that, the day is pretty much over. I just relax until the next day.

Moe Harkless: Yeah, except for on Wednesday, when we do movement in the morning and basketball at night.

KN: Does that include a 5-on-5 scrimmage?

Moe Harkless: No, we do that once a week. At night, we usually just get a lot of shots up.

KN: Have you received any advice from NBA players or coaches or your trainer that you're carrying with you as you prepare for the draft?

Moe Harkless: You know, they tell me just to go hard all of the time and just show real intensity at whatever workouts that I go to. Always play as hard as you can play.

KN: So, where have you worked out so far?

Moe Harkless: I've just been down here. I haven't gone anywhere yet. I have a workout next week with the Orlando Magic.

KN: You were invited to the NBA Draft Combine. What will decision makers learn about you in that setting that they didn't already know?

KN: It's been quite a year for you, Moe. What are your thoughts on your rise from an unheralded top-50 high school recruit to a potential top-20 pick?

Moe Harkless: I think it's just about getting that exposure and showing people what I can do. As the college season went on, I got a better chance and I got to play in front of a lot of people and I think that helped.

KN: Do you think playing the most minutes of any freshman prospect in the NCAA help?

Moe Harkless: I think being put in the right position helped. Life is really just about situations and if you're in the right situation than you can show what you can do. Pretty much anything can happen.

KN: Looking back on your first year at St. John's: what are the things that you did well and what are the areas of your game that you need to improve on?

Moe Harkless: I think I need to improve my shooting. I didn't really shoot the ball well. Ballhandling, as well. Those are the things that I've been working on mostly: getting my shot to drop more and working on my ball handling, getting stronger, faster.

KN: You shot 21% from beyond the arc last year and you're likely going to play on the perimeter full-time at the next level. So, how important is the jump shot to your success and what are you going to do to get it to where it needs to be?

Moe Harkless: I think it's important for any player to shoot the ball, especially in this process: to hit shots in workouts and stuff like that. I think that doing that consistently will take my game to the next level and I think that's a big step.

KN: What kinds of drills have you been working on to improve your ball-handling and shooting?

Moe Harkless: With shooting, it's all about reps and I've been getting a lot of reps up, coming off screens, trailing, coming off picks and everything, all different kinds of shooting drills and dribbling drills with two basketballs, one basketball, just a lot of different things.

KN: So, how many shots do you think you're taking a day?

KN: What was it like playing for most of the year out of position? You came into college expecting to play on the wing, but you played a lot of the season at power forward and even at center.

Moe Harkless: It was a tough situation. It wasn't what I expected, but I just tried to make the best of it and it gave me a chance to show my versatility, so I think in the long run it helped. I just pretty much had to do whatever it took, whatever my coaches wanted me to do, to win games. So, that's what I did. Unfortunately, we didn't win a lot of games, but I just basically had to do whatever was needed from me.

KN: What were the kinds of things that you learned from Coach Lavin and Coach Dunlop?

Moe Harkless: I learned a lot from them. You know, they're two great coaches. Unfortunately, I didn't get to play under Lav for the whole season, but playing under Dunlop was also a good experience. These guys told me a lot of different things, what it takes to be able to play at the next level. Also, Coach Dunlop and Coach Rico worked with me everyday after practice and stuff like that and they helped me a lot.

KN: Was it hard for you and your teammates to deal with Coach Lavin's illness?

Moe Harkless: Yeah, definitely. We came into St. John's hoping to play for Coach Lavin and he wasn't there for the season, you know, for his personal reasons. It was tough on us mentally but we had to stay strong.

KN: What were some of the other challenges that you've faced over this last year?

Moe Harkless: It was tough just adjusting to playing a different role. Transitioning from high school to college is really tough. You know, it's a completely different level and I'm pretty sure that transitioning from college to the NBA is going to be an even tougher challenge. You can already tell from the intensity of the workouts and everything, so that's pretty much the hardest part: transitioning.

KN: What was it like playing in college in front of your hometown fans?

Moe Harkless: It was great, definitely, seeing my family and a lot of my friends at every game. It was a great experience to be able to stay at home and play.

KN: How difficult of a decision was it to declare for the NBA Draft? What were the reasons for you declaring when you did?

Moe Harkless: I just felt like it was the right time and that it was a good situation. I talked it over with my coaches and my family and we all felt like it would be a good opportunity to take.

KN: What advice did you get from your coaches, your advisers, and your family?

KN: Yes. What were the different types of things that you had to take into consideration?

Moe Harkless: It's a big risk that you're taking and that's really the main thing that you have to think about, whether or not you're ready to be able to compete at a higher level every single day and do this for the rest of your life. Being able to take care of your family and make my mother happy, that's the biggest thing for me in the world.

KN: Looking towards the draft, who are the types of players that you're modeling your game after? What kind of role do you think you can play in the NBA right now?

Moe Harkless: A lot of people compare me to guys like Paul George, Rudy Gay, and Joe Johnson. Those are all pretty good players. I'm just going to go in for whatever team drafts me and try to just do whatever I can do to help the team and whatever the coaches need me to do.

KN: A specific situation aside, what kind of role or style of play do you think suits your game?

Moe Harkless: I think what fits me most is an up-tempo style of play. I like to run. But, for any situation or any team that picks me, it will be a great honor to be able to play for any team in the NBA.

KN: People have questioned your NBA readiness and decision makers may see you as more of a down-the-road type of prospect rather than a guy who can contribute immediately. Do you think that scouts are underestimating your ability to produce right out of the gate?

Moe Harkless: Like I said before, I'm going to go in and do what I can to help the team out and, given the right opportunity, you never know what could happen.

KN: Have you thought at all about playing for a hometown team like the Knicks or the Nets?

Moe Harkless: People talk about it, but I haven't really thought about it that much. I'm not really thinking about one team or anything like that. Right now, I'm just trying to get better and prepare myself.
Read Next...