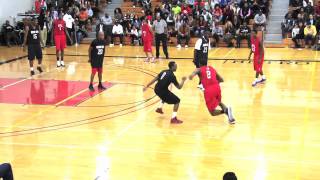 Matt Williams
@DraftExpress
Overview: A versatile small forward who has developed into a legitimate all-star player. Isnt a freak athlete, but is very smooth and fluid and has an advanced feel for the game that allows him to more than effectively display his skill set. Wasnt an overnight success. Put in two solid seasons at Arkansas before leaving for the League. Found himself in an ideal situation with the Phoenix Suns from 2003-2005. Blossomed into one of the best young swingmen in the game after being traded to the Hawks. Very intense demeanor on the court. Doesnt make a lot of highlight reel plays, but shows the poise of a veteran and is the face of the retooling Atlanta franchise.

Offense: Has developed into one of the Leagues best scorers. Scores in almost every way imaginable; score efficiently off of pick and rolls, dribble drives, post ups, and spot up jumpers. Almost impossible to guard one-on-one. Versatility makes him a tough matchup as well. Has beautiful form on his jumper. Has range and consistency both off the dribble and with his feet set. Displays good elevation and doesnt have a very hard time getting his shot off over defenders. Can knock down shots off balance and with a hand in his face. Jumper makes him a formidable scorer from the perimeter by itself. Gets quite a bit of his offense around the rim. Has hesitation moves and crossovers that are extremely difficult to defend considering his length and impressive first-step. Prefers to go left, but is actually a more efficient scorer going right. Gets to the line at a decent clip, where he shoots a great percentage. Does quite a bit of ball-handling and acts as a point-forward on a pretty regular basis. Court vision and savvy make him an extremely versatile mismatch when doing so. Can dribble through pressure. Turns the ball over periodically, but handles such a heavy load offensive that its a bit surprising he doesnt do it more often. Draws defenders to create opportunities for his teammates. Can push the ball and get up the floor on the wing equally effectively.

Defense: Plays very solid defense. Maintains a good stance, but doesnt overexert himself. Makes the effort not to give up anything easy. Doesnt create many turnovers considering the amount of time he spends on the floor. Isnt the type of defender that is going to harass his man physically. Will get low and use his foot speed to deny penetration. Willingness to work on the defensive end allows him to get his hand on the occasional pass. Wont take too many risks when playing passing lanes. Mixes it up on the glass from time to time, and rebounds at a decent clip. Usually wants to look for the outlet pass or run the floor when his man doesnt crash the glass.
Read full article