NBA Scouting Reports: Filling in the Blanks- the Shooting Guards 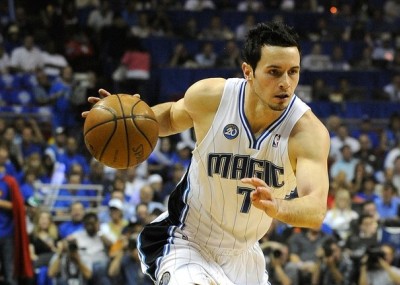 Matt Williams
@DraftExpress
In these reports, we take a look at the shooting guards moving into their fourth year in the NBA. As we found when we identified which players from the 2005 draft were still in the NBA, the trajectory of a player's career is often unpredictable, which is why we opted to wait until this group was transitioning out of their rookie contracts to gauge their progress.

J.J. Redick
Overview: One of the purest shooters in the history of the college game who is slowly carving out a niche in the NBA. Has been knocked for his lack of athleticism since his college days. Not very big or physical for his position either. Elite shooter. Has improved in other areas, but remains limited due to his lack of prototypical physical tools. Former McDonalds All-American. Had a simply tremendous four year career at Duke. Was a high level scorer from day one, but reached outstanding heights as a junior and really solidified his draft stock as a senior. Named the ACC Player of the Year in each of his final two seasons, winning most consensus national player of the year awards in his last season under Mike Krzyzewski. Set the NCAA record for career three-pointers made, showing an unparalleled level of confidence, consistency, and shooting touch. Garnered a selection in the lottery despite questions about his ability to translate his game to the next level. Hasnt proven to be the lights out NBA shooter than many had hoped he would become. Lack of efficiency inside the arc hurts him. Still a threat to spread the floor and has improved in small ways over his first few years.

Offense:Capable shooting specialist at this point, but not at the level that he once was. Gets almost half of his touches in catch and shoot situations, with jump shots accounting for virtually all of his offense. Very capable shooter when left open from the perimeter, but only a bit worse with a hand in his face. Always moving around the arc looking for daylight. Form still looks flawless. Not as dynamic on the move as he once was, having some issues hitting shots off balance against more athletic defenders. Inability to create ideal separation hurts him when he opts to pull up off the dribble too. Not a threat to do too much damage when he puts the ball on the floor, but has improved his ability to score around the rim since entering the League, though it doesnt always show in his stats. Awesome foul shooter, though he doesnt get to the line too often. Takes advantage of easy opportunities at the rim, having learned not to force things. Doesnt display the most impressive ball handling ability or passing, but isnt turnover prone either.

Defense: Had his moments in the 2009 playoffs by playing extremely active, but will remain a potentially exploitable match up since he has to play all-out to be effective. Lacks ideal lateral quickness and strength. Shows very good fundamentals and displays nice awareness off the ball. Doesnt possess the explosiveness or length to force many turnovers, but will get a hand up on shooters. Struggles in one-on-one situations, but works hard to fight through screens to stay with his man on the pick and roll. Will look to secure long rebounds. Not an ideal defensive option, though his effort level will help compensate for all of his shortcomings on a game-to-game basis.

Shannon Brown
Overview: Powerfully built shooting guard. A bit undersized, but blessed with outstanding strength, a big wingspan, and explosive leaping ability. Not a great offensive talent, but has improved his efficiency and decision-making considerably. Plays tough defense. Was a highly touted prep player, playing in the McDonalds All-American Game and being named Illinois Mr. Basketball while at Proviso East (IL). Didnt make a big splash in the NCAA right away, but became a very solid overall player by his junior year. Landed in the late first round and struggled mightily early in his NBA career. Showed a glaring lack of efficiency in his first two seasons in the NBA, but turned things around in 2009 with the Lakers, playing a role in their Championship run. Made a sizeable impression, appearing to find his niche down the stretch.

Offense: Surprisingly efficient offensive player for the Lakers after struggling for so long. Gets about a third of his offense in spot-up situations, with another sizeable portion coming from fast breaks, cuts to the basket, and one-on-one opportunities. Never known as a great jump shooter, but showed marked improvements down the stretch. Has decent form highlighted by excellent elevation and a compact release. Doesnt rush his jumper as much as he did early in his NBA career, helping him quite a bit. Pretty solid catch and shoot player when given time and space. Not nearly as consistent with a hand in his face or when hes forced to pull up off the dribble. Triangle caters to his shooting ability and allows him to use his explosiveness at the rim as well. Extremely quick first step and attacks the rim like a cannonball. Not going to show a lot of shifty ball handling in the lane, but handles the ball intelligently, making one move and attacking. Very capable finisher due to his excellent leaping ability. Moves well off the ball, taking advantage of opportunities to go back door. Not a natural playmaker, but not horribly turnover prone either. Seems to have really worked on the things that will help him in the triangle.

Defense: Really solid defensive guard. Long, aggressive, active, quick, and strong. Gets down in a stance and shows solid lateral explosiveness, though he doesnt respond well when he has to change directions on a dime. Doesnt get blow by very often, preferring to give a foul than an easy basket. Shows solid defensive fundamentals when closing out shooters, not leaving his feet for anything short of a very aggressive shot fake. Displays very active hands, allowing him to strip the ball away in some situations. Lack of ideal lateral agility hurt him against some elite guards, though hes able to compensate with other tools, and does a very nice job against shooting guards as well.

Daniel Gibson
Overview:Essentially a shooting specialist who is capable of spending time at both guard spots, but is naturally better as a scorer. Has solid size for a point guard, but remains undersized for a shooting guard. Not a great athlete, but passable. Doesnt play the point much at this juncture. Was a dominant high school player, winning a state championship with Jones HS (TX) and playing in the McDonalds All-American game. Proved to be a capable scorer during his two seasons at Texas. Won the Big 12 Freshman of the Year Award. Took a step back in some areas as a sophomore, and ultimately fell into the second round. Garnered a selection in the second round, but received a guaranteed deal and played a major role in Clevelands playoff success as a rookie. Had an outstanding season shooting the ball in 2008. Appeared to be a legitimate steal considering where he was drafted. Was knocked out of the 2008 playoffs with a separated shoulder, which coupled with an offseason ankle surgery and a toe injury, prevented him from rebounding with a strong regular season. Playing under a highly affordable deal.

Offense: A quality spot up shooter who fell into a bit of slump when he wasnt healthy. Gets almost half of all of his shots up from catch and shoot situations from three. Deadly accurate from three point range for stretches early in his career. Gets good elevation on his shot and is not a liability with a hand in his face. Capable of making shots with consistency off the dribble when healthy, but proves inconsistent for stretches. Will make and take some off balance jumpers when he gets hot. Prefers to pull up when driving left and tends to attack the basket when driving right. Does very little damage at the rim due to his lack of physical strength. Size and frame hurt him in one-on-one situations as well. Displays a decent floater, but needs to improve its consistency. Looks solid handling the ball, but will struggle against full court pressure, and simply doesnt offer the playmaking ability you look for from a point guard. Not very turnover prone, which helps make up for his lack of creativity and passing. Looks for his own shot when running the pick and roll. Has had his moments as a scorer in the past. Really an asset when hes healthy and shooting up to his potential, regardless of his ability to play the point.

Defense:Not an ideal option defensively. Lacks the lateral quickness to keep up with the elite point guards in the NBA and the physical strength to effectively defend bigger guards. Shows a willingness to get down in a stance and move his feet, but struggles with screens and allows quite a bit of penetration. Will get a little too aggressive when closing out shooters, but gets a hand up when he can. Doesnt force many turnovers out on the perimeter, but has a real knack for stripping the ball when he digs into the post. Quick hands and smarts allow him to make an occasional play, but that doesnt compensate for his other shortcomings.
Read Next...