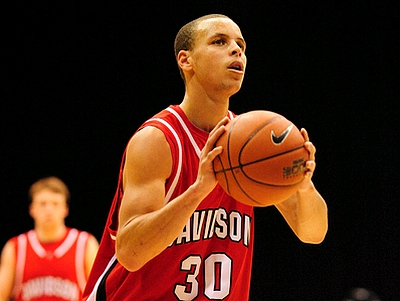 Eric Weiss
@DraftExpress
The conclusion of the NBA Draft Combine marks the beginning of six week sprint to the draft itself. Over the past week, two important topics were outlined that help to illustrate just how pressure-filled this sprint can be for NBA teams. With the lottery coming up tonight, this is the perfect time to continue the conversation on this topic.

-The Gradual Erosion of the NBA Pre-Draft Process
-How would the 2014 NBA Draft Look Based Solely Off RSCI Rankings?

The erosion of the NBA draft process took a critical look at the value of the information the NBA Combine provides teams. One of the key insights from this year's event was that many teams were using the interview portion to collect key information about players they weren't going to draft. Savvy organizations realize that collecting data on a player's personality is a vital component for effective evaluation in the future. The more they know about a player, the easier it is to understand how he handles the situations he's placed in going forward.More From Eric Weiss
Breaking Bad: The Thin Line Between Busts and StealsBut, the past is often a great indicator of future performance. Using high school recruiting rankings and comparing them to a player's draft stock can be a helpful tool for sleuthing out early indicators that might lead to success and failure. In psychology, the term Interactionism means the study of how both personality and situation impact behavior. It's a simple concept that we all experience. We don't act the same way in every environment we're placed in. The pressure to conform to the rules that govern a situation impacts how we act.

Some basic examples of this can be found easily enough just by going through DraftExpress' extensive interview library. Listen to how some of these McDonald's All-American's perceive themselves at age 17 when they are at the heart of the recruiting world. Yet, traveling to Portsmouth Virginia for the Seniors Only Invitational and the D-League Showcase in Renowhere many of these All-Americans end up eventually-- provides a sobering look at how quickly one's star can fall. If only reality TV could transform these two events into a Scared Straight program for aspiring young basketball players...

This Nature/Nurture perspective is never more aptly displayed than when analyzing basketballs "Super Elite" prospects. These Top-25 ranked high school recruits (described as RSCI-25 from here on out) have grown up surrounded by great expectations and showered with accolades at a young age. But, in just a few short years, a significant portion of this group will go from celebrated to scrutinized, as they struggle with their own limitations while adjusting to the demands of the NBA. Meanwhile, a group of Non-Elite from outside the RSCI-150 (described as Non-150s) will find themselves in similar situations post-draft.

However, this group's rise from scouting service obscurity tells a much different tale as far as the back story goes. They may have both arrived at the same point, come draft night, but their circumstances were much different and demanded different mental approaches to get there. Part One of Opportunity Knocks will focus on how prestige and privilege allows for more character flaws among the Super Elite by analyzing the behavioral trends of 71 RSCI-Top-25s and 46 Non-150's who were fortunate enough to find themselves drafted in the first round. What can we learn about each group?

There are some immediate differences evident between the RSCI-25 and those draftees who were ranked outside the RSCI-150. Analyzing these differences by five Critical Core DynamicsTM of teamwork can help outline these differences. These CCD's are part of Sports Aptitude's classification system, which categorizes players based on shared patterns in their personality data:

All First Round Picks (Both Groups Combined)

Using these categories allows us to study variations in individual behavioral traits among the Super Elite and Non Elite 1st Rounders. More detail on the classification system can be found at the end of the article. For the purposes of this article, internationals were included in the Non-Elite sample. The international development process places a greater emphasis on achievement and less on star power, which we've found reflects in their similarities to the US Born Non-Elite group in the selected categories of focus. 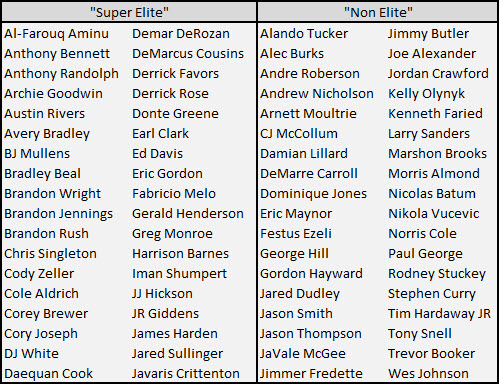 Team Identity: Measure of how a person interacts with other members of the team.
There are 12% less Guarded/Calculating Non-150's  players who aren't heavily influenced by personal relationships or an overwhelming need to be part of a group. This group is also 12% more Self-Disciplined, 10% less Relaxed, and 15% less Change-Seeking compared to their RSCI25 Guarded/Calculating counterparts.

Translation: There are more introverts among the Super Elite and their talent lets them get away with a number of bad habits. They don't have the same intensity and are quicker to look for a change of scenery if things aren't working in their favor. They're used to the world bending to their needs and generally believe that those needs should be attended to. The players who don't enjoy such lofty reputations have to have a more diligent approach to accepting the situations they are placed in, while channeling their intensity into more productive areas for their individual growth.

Internal Motivation: Measure of a person's desire for structure, organization, and governing authority.

There are 11% more Open/Engaged Non-150's  Players who have solid work habits, but who are influenced greatly by the environment they're placed in. This group is also 14% more Team-Oriented, 12% more Risk-Taking, and 15% more Stable compared to their RSCI25 Open/Engaged counterparts.

Translation: The Super Elite can afford to be more independent in their decision-making and are given more free passes for their emotional ups and downs. The Non-Elite looking to rise have to take more risks to get where they want to be and must have the composure to handle those situations well. They rely more on collaboration with teammates to solve problems and figure out how to fit their goals into the overall team objectives. Talent alone isn't going to win this group allies, their consistent approach and willingness to step up to challenges while still including others is the way they earn their respect.

Dominance: Measures a person's competitive edge and desire to fight for control during competition.

There are 15% more Bold/Combative Non-150's  Players who are highly assertive, play with an edge, are tough-minded, stubborn, and seek out challenges without fear. This group is also 11% more Controlling, 12% less Self-Doubting, and 11% less Rule-Bound compared to their RSCI-25 Bold/Combative counterparts.

Translation: This ultra-competitive category can be the difference between becoming a role player or rising to stardom on the college level. In the fast-paced world of recruiting, the Super Elite are far more likely to be pegged for a more prominent role coming into their teams. Thus, it is easier for them to be pushed along in their growth even if they're lacking some natural assertiveness. The Non-Elite don't have it so easy. Having lower expectations and being more replaceable forces this group to fight harder from the get-go as they try to prove themselves worthy of greater consideration.

Mental Toughness: Measures a person's ability to handle situational pressure and personal adversity, both in the moment and over the long-term.

There are 9% more Patient/Passionate Non-150's  Players who are outwardly calm and controlled on the whole, but whose decisions feed off of emotional magnitude of the moment, creating a heightened response to the particulars of a given situation. This group is also 10% Warmer, 10% more Restrained, and a whopping 25% less Conservative compared to their RSCI-25 Patient/Passionate counterparts.

Translation: How a player deals with game pressure and situational adversity is tremendously important for determining how he fits his role on the team. Playing with passion is great for rising to the challenge of the moment, but can also lead to bad decision-making, both on the court and when communicating with teammates. The Non-Elite must walk a tight rope, being far more flexible in terms of how they approach challenges. They can't just conservatively stick to their comfort zones if they wish to achieve success. But, that creativity must be filtered through a greater awareness of how their actions will be perceived by others, as well as the ability to control their impulses in order to pick their spots more appropriately. The Super Elite can afford to be a bit less considerate when it comes to their reactions due to the stature of their reputations.

Awareness: Measures a person's emotional vs. logical reasoning as well as analytical vs. conventional reasoning.

There are 12% more Unbiased/Objective Non-150's  Players who are unsentimental, tend to live in the moment, and make decisions based on what's familiar. This group is also 19% less Accommodating, 16% less Threat-Sensitive, and 10 % less Accepting compared to their RSCI25 Unbiased/Objective counterparts.

Translation: These players are good at filtering out all the noise and making clear, objective decisions based on both strategy and well-practiced routines. They rely on the team structure to justify their choices based on the rules laid out before them. This is extremely important for the Non-Elite, because they must be far more aggressive with their competitive instincts in order to rise up the food chain. Having a solid foundation to prove bold actions through logical arguments is essential for this group if they want to be given the green light to continue pushing the envelope. The Super Elite benefit from this practical-minded approach as well, but are often more protective of defending their existing status. This group is often placed in team environments where there is other Super Elite competition to defend their turf against, making aggressive risk-taking a dicey proposition.

This research study focused in on five specific Behavioral Type categories to get a better sense of stories behind the players who fell into each category. From the data collected, it would be easy enough to assume that finding the perfect First Round Riser would be a simple matter of identifying which Non-Elite prospects were members of all five of these categories. Unfortunately, there are two problems with this line of thinking.

The first is the difficulty presented in collecting this data in advance of the draft. Since access is limited to these players before they declare, we must rely much more on observable behavior in the absence of quantifiable feedback  this creates a playground of opportunity for making errors in attribution, as we all tend to interpret a player's intangibles through the bias of our own subjective lens.

The second issue is more acute. Certain behavioral combinations are just not that common. For instance, how often would you expect a person to be both Passionate in their approach while still remaining Unbiased in their decision-making? Here's a hint  only 5% of the entire Sports Aptitude database falls into that designation. Identifying the perfect attributes is easy enough, identifying the perfect player is somewhat more difficult. And we haven't even taken a player's talent-level and skill-set into account. Part two of Opportunity Knocks will focus on how certain behavioral differences impact actual performance on the NBA level. We will take a deeper look at the RSCI-25 based the situations they face once they're in the Association and how they've dealt with them to date.