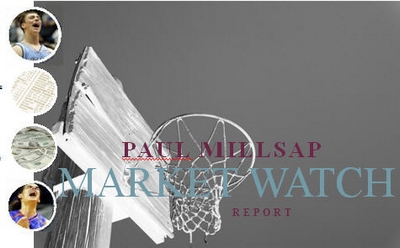 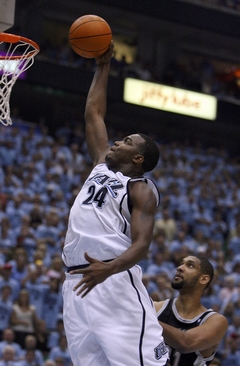 Paul Millsap will be having a happy homecoming during All Star weekend this year. The Super second-year forward has been named to the Rookie/Sophomore Challenge, which will be played in New Orleans. The Louisiana native has gone from surprise late 2nd round pick to established quality backup power forward in just two seasons. His game has evolved between his first and second year and his teams confidence in him has grown.

For those who arent yet familiar with Millsaps game, the All Star weekend should be a coming out party of sorts for a player who will be around for years to come.

Millsap has really worked to improve his game from season one. As a defensive sub off the bench, Millsap had already shown himself to be a reliable rebounder and opportunistic scorer. Millsap was at his best in season one scoring off of put-backs and taking advantage of his limited post opportunities.

Cutting will always be a huge portion of Millsaps game as long as he plays for the Jazz, but his effectiveness executing those cuts has increased substantially. Millsap has seen his usage go up in the Jazz offense, getting nearly double the spot up attempts in addition to his improved conversion on cuts.

Millsap currently ranks in the top 20 amongst power forwards in rebounding (17), steals (6), and blocks (18) per 40 minutes. He has also been asked to play multiple positions defensively while his minutes have increased.

While Millsap is seeing more possessions and getting more opportunities to expand his offensive game, his spot up shooting percentages are down from last year by a sizable margin. Much of this can be attributed to improved defensive scouting however. Last season Millsap saw more uncontested or poorly challenge shots, because the book on him stated that he had no range worth worrying about.

Millsap is also going to have to improve his face-up ability when on the block. He favors his left more than his right, and defenders are hanging on his post moves, both on help and on ball. Attacking with the threat of the shot out of face-up should make him a more effective option on the block going forward. His success is garnering more defensive attention down low as well, so making a quick play directly into the shot or with one or two dribbles will help to beat the help defense.

Overall, Millsap has come a long way since draft night two years ago. As his offensive game develops, both in set-shot and post situations, he should see his production increase if not his time. Millsap has shown a little promise as a situational small forward as well, though his minutes have been extremely limited. But against some of the SF/PF tweeners of the league, he may be able to steal some minutes as a power 3 at times.

Eric Weiss: Go back to last season. Coming out of college you were a 4-5, and there were questions about how your game would translate to the pro level, probably because you didnt have ideal height for a 4 in the NBA. What did you think it would take to be successful?

Paul Millsap: I really didnt want to change up anything. People were telling me that I was rebounding at an NBA level already, even as a freshman. So I just wanted to continue to do that and work on improving the other elements of my game.

Eric Weiss: Can you talk a little bit about being labeled a tweener coming out of school? There have been a lot of really good players that have slipped in the draft the last couple of years because they didnt have those ideal measurements. What do you think is the most important thing to look for in a player?

Paul Millsap: For me, Id look for determination and the heart a player has. Id do a thorough background check to see what type of person that guy is. Id want to see if hes willing to get better, see what hes willing to do to get to that level. Me personally, I dont look at the measurements, because they really dont prove anything. There are a lot of smaller guys who have a bigger heart than some of the larger guys, and actually do better than them. But measurements are where [scouts] usually start from, so its going to continue to happen.

Eric Weiss: You were a pretty good shot-blocker and a great rebounder in college, but you werent really known for your man defense. Fast forward to this year, and youre asked to cover multiple positions, anywhere from small forward through center sometimes, and youve become known for your defense. How did this change come about?

Paul Millsap: Its a major change. In college I was the main guy, theyd kind of hide me so I wouldnt pick up quick fouls. Now I play behind Carlos Boozer, so if I get in foul trouble, hell just come back in the game. So while youre out there, you have to give it 110 percent, and thats what I try to do, foul trouble, or whatever the case may be.

Eric Weiss: Talk to us a little bit about being a rookie last year. You were a 2nd round pick coming onto a playoff caliber team who eventually went to the Western Conference Finals. How hard was it going into training camp and earning a spot in the rotation?

Paul Millsap: For me, I wouldnt say it was too hard. Knowing the kind of guy that Jerry Sloan was, people tell you stories. You just want to do everything his way-the right way. All he wants you to do is just go out there and play hard. Thats what I tried to do, just tried to go out there and do everything right. Thats what got me to where I am now. He showed confidence in me and put me on different players night in and night out. Once you show that you want to be out there, and you know what youre doing, hell show confidence in you.

Eric Weiss: Whats it like playing for Coach Sloan? He was known as a tenacious and fiery competitor, and thats really what a lot of people see when they see you play. Does he get fired up still when hes on the sidelines watching the action on the court?

Paul Millsap: Oh yeahI dont think hell ever lose that tenaciousness. But to know the kind of player he was, gritty and diving on the floor and all thatthatll help you be a good player too. Once you do, that I feel all the rest will just come along.

Eric Weiss: Your first year, you got most of your offense on hustle-type plays: offensive put-backs, dump-offs from other players driving, defensive rotations, etc. This season were starting to see quite a bit more from you. Improved ball-handling, some jump-shooting, feature post-up plays. Were you asked to work on this stuff by the team, or did you take it upon yourself?

Paul Millsap: Its a bit of both. As a rookie, you really dont get to show all of what youve got, because youre kind of playing a specific role. So I just spent the summer trying to improve. The coaches told me what they wanted me to work on in the off-season, and I spent the summer trying to work on those things. When I got back up [to Utah] they had more confidence in me to try to make plays.

Eric Weiss: Absolutelyit just seems like you could have carved out a pretty nice niche for yourself simply strengthening the things you were already good at. Did you surprise the coaching staff at all with some of the things that you could do coming into this year?

Eric Weiss: So, your game is really coming along, youve been named to the Rookie/Sophomore game, and its a homecoming of sorts for you as the game is being played in New Orleans. What does it mean to you to be a part of All Star weekend in front of friends and family?

Paul Millsap: It means a lot. I had fun last year, but itll mean even more this year because Ill have my family down there. I know a lot of people are going to come down to support me, even though its an All Star game that really doesnt mean much in actuality. But it feels good just to get out there in front of them and play.

Eric Weiss: You should throw a couple threes up while youre out thereno one will laugh at youor yell

Eric Weiss: So, youve steadily improved over the last two years and your role on the team seems to be growing by the monthany personal goals set for this season or in future seasons?

Eric Weiss: Just keep working hard, take it day-by-day, and see where it leads you?

Eric Weiss: You came from a small school. You were drafted in the late 2nd round onto a playoff team. You quickly carved a niche for yourself in the NBA. Do you have any advice for future prospects looking to make it in the league?

Paul Millsap: Dont believe the hype. Its a lot harder than college. It gets harder, its not going to get any easier. People will often just look at the outside and see that basketball players have nice cars and things like that, you know. But its not that easy. They dont see the work thats put in on the court. The practice we put in and how much we have to do off the courtJust stay humble and continue to work hard, thats all I can say
Read Next...