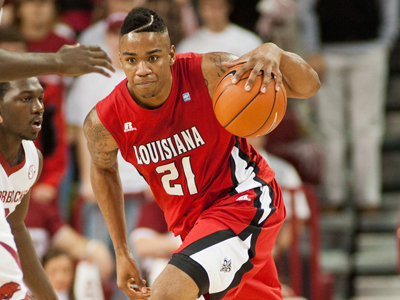 After transferring out of a frustrating situation at Mississippi State and becoming a father, Shawn Long translated his potential as a high school recruit into a stellar career at Louisiana. Long earned First Team All-Sun Belt honors three years in a row before being named Sun Belt Conference Men's Basketball Player of the Year as a senior. Beginning his career playing alongside of Elfrid Payton and finishing his career as a first option, Long had plenty of opportunities to showcase his strengths and weaknesses in front of scouts. Despite not receiving an invite to the NBA Combine, however, Long figures to get plenty of workouts giving him some opportunity to work his endear himself to a team with a pick in the 2nd round.

Standing around 6'10 in shoes with a 7'1 wingspan and a 8'10 standing reach, Long has prototypical size for an NBA power forward. He is a solid athlete, as well, not particularly quick, but explosive around the rim with the ability to run the floor in transition. Long's overall athletic profile might benefit from streamlining his bulky 245-pound frame and improving his conditioning, but he does have solid physical tools for an NBA power forward.

Long averaged 18.9 points and 12.1 rebounds per game in a feature role and posted consistent numbers against strong and weak competition on the 79th most efficient offense in college basketball. He was also by far the best player on a decidedly below average Louisiana team that went 41-29 with consecutive fourth place finishes in the Sun Belt Conference since Elfrid Payton was drafted in 2014 as Long couldn't propel them to significant success.

In the games where he faced quality competition, Long struggled to body stronger and more athletic defenders in the post, instead settling for contested jump hooks and turnaround jumpers as well as wild drives at the basket. His lack of an elite first step and average ball handling ability were problems, too, as they limited his creativity and effectiveness as a scorer off of the dribble. Thus, while Long actually looked fairly comfortable operating facing the basket against weaker competition, he was simply unable to find his way to the basket against NBA-caliber athletes. Even when he could get by his man, he tended to throw up a lot of contested jumpers off of the dribble, rarely using his physical tools to fight his way to the basket.

Furthermore and as we observed in previous reports, he never developed a truly reliable post move. This was evident in the fact that, despite seeing 28.1% of his offensive looks in the postfrequently against smaller and less athletic defendershe made a below average 44.6% of his attempts. He was not the most aggressive player in the post, either, not demanding the ball as often as one would expect and looking overmatched far too often on the block. As has been the case throughout his career, he turned the ball over at a high rate when met with double teams and posted a career-high 3.4 turnovers per 40 minutes pace adjusted overall.

When he was able to get to the basket, however, he was a good finisher, making 63.8% of his looks around the rim in the half court and displaying the strength and athleticism to fight through contact on his way inside. The senior attempted 8.7 free throws per 40 minutes pace adjusted, showing an ability to draw contact if he did not have a clean look at the basket. While Long is not the most polished post scorer, he does a great job of doing the little things to find opportunities inside moving without the ball and cutting to the basket, running in transition, and cleaning up his teammates missesthree things he did quite efficiently this season. He ranked as the best offensive rebounder among prospects in our top-100, pulling down 5.2 per 40 minutes pace adjusted.

Beyond his interior scoring ability, scouts have long been intrigued by Long's ability to stretch the floor. As a senior, he shot a career low 67 three-pointers and posted a career low 26.7% 3FG. He made just 27.7% of his overall jump shots, as well, posting career low shooting numbers across the board, despite being a career 34.1% 3FG shooter. A streaky shooter with unorthodox mechanics, Long shoots the ball with very little elevation and a truncated release. Many of his misses hit front rim, which raises additional questions about whether he can develop shooting range out past the NBA three-point line. He did show more conservative shot selection, taking far less questionable looks from beyond the arc as a senior, but his resume as a shooter  whether from beyond the arc or at the free throw line where he shot 67%  is decidedly mixed, leaving scouts with far more questions than answers regarding his potential as a stretch-four.

His defensive resume is similarly murky. While Louisiana was not a good defensive team, Long displayed many of the strengths and weaknesses that we observed during his junior season. As we noted in the fall, Long is likely a tweener at the next level and relies quite a bit on his physical tools on defense. He does not have the strength and length to guard NBA centers, but he did prove to be an adequate post defender and rim protector at the collegiate level blocking 2.1 shots per-40 minutes pace adjusted. He appears better suited to guard power forwards, as he consistently makes an effort to close out on shooters, but lacks ideal lateral quickness and foot speed to guard the pick-and-roll. While Long is a mixed bag defensively, he is an exceptional rebounder, grabbing 15.1 rebounds per-40 minutes pace-adjusted, nearly 10 of which came on the defensive end of the floor.

Long is a complicated prospect given his fairly well defined strengths and weaknesses and at 23 years old has less potential than a bevy of collegiate and international second round prospects. Long did anchor a solid NCAA offense, however, showing versatility that NBA teams expect from power forward prospects and the willingness to do little things like rebound, move without the ball, and make an effort defensively. Ultimately, however, workouts will determine Long's fate, as he must show scouts that he has regained his shooting touch and improved his conditioning. It remains to be seen whether Long will hear his name called in the second round on draft night. After a stellar collegiate career, however, it is safe to say that he should have plenty of opportunities to play basketball overseas and in the D-League if the NBA is not an option next season.
Read Next...