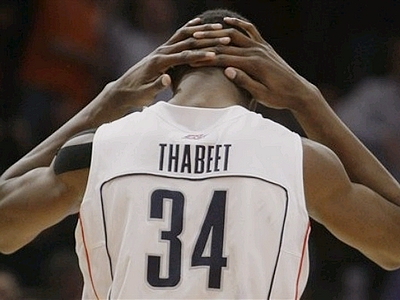 Matt Williams
@DraftExpress
We're back with another round of analysis using Synergy Sports Technology's wealth of data to examine which players at the center position excel in which areas. This group of prospects will inevitably be our smallest, since true centers aren't easy to come by, but it also happens to be our more homogeneous statistically, with nearly every player (even our two international entries) functioning in similar capacities for their respective teams. More than any position, center prospects are often the most thoroughly scrutinized due to the premium put on size and potential by NBA decision-makers. While players like Hasheem Thabeet are valued because of their defensive ability, offensive efficiency is half the equation and can be a limiting factor for any player.

Considering this group is only eight players deep, we've opted once again to single out individuals and discuss what they bring to the table. We'll pay special attention to the players we view as the top prospects: Hasheem Thabeet and B.J. Mullens.

Findings
 Hasheem Thabeet's value comes from his defensive ability, but the development of his offensive game will be integral to his success in the long-term and determine how he is viewed as a player.

Thabeet is going to block shots next year, pull down some rebounds, and face an uphill battle to become a bigger offensive threat than he already is.

Before we look at the difficulties he may face, we first need to take a step back and observe how Thabeet's role has grown over time on paper. In his first season under Jim Calhoun, he got only 1.3 possessions per game in post up situations (25% of his total offense), and almost one-third of his touches off of basket cuts. This past season, he got nearly 35.1% of his touches on the block, a dramatic improvement from his first season. After almost exclusively earning his touches on hustle plays as a freshman, Thabeet put up 1.08 PPP in 4.1 post up touches per game as a junior, ranking him first on our list in PPP and showing how significantly he improved from his sophomore year (.76 PPP). Obviously, Thabeet grew as a player during his time at Conneticut to the point that he was a viable offensive option this season, but that doesn't necessarily mean that he's going to do much scoring in the NBA.

There are a number of reasons to be skeptical about Thabeet's ability to score on the NBA level. First, he got only 11.8 possessions per-game on the offensive end this season, 5.4 of which came on catch and finish opportunities off of offensive rebounds, cuts, or otherwise. His total touches would rank him second to last amongst our power forward group and in the middle of the pack amongst our centers. He shot 73% on his finishing opportunities, using his size effectively and dunking anything he could, and also shows some ability to get up the floor and make some small contributions in transition. Nearly all of Thabeet's touches came within 5 feet of the rim, as evidenced by the fact that he only took 14 jumpers all season. His 1.08 PPP on the block was better than any player we looked at with the exception of DaJuan Blair, but his 4.1 touches was below average for a center. Obviously Thabeet did a solid job getting more touches as time went on, but he's still didn't generate many scoring chances as a senior in comparison to the players he's competing with for draft position.

Its more than a bit concerning that Thabeet was already having trouble making his presence felt on the offensive end on the NCAA, however efficient he may have been. He was after all, essentially a giant in a land of midgets. He won't have anywhere near as big a physical advantage in the NBA as he did in college, which will make things even more difficult on him moving forward.

Thabeet struggles badly trying to create opportunities for himself, being incredibly reliant on the talent and generosity of his teammates to generate offense for him. When he was able to get the ball in scoring position, though, he was a major force. Thabeet scored a point on 62.7% of his half court offensive touches, ranking him first amongst all players we looked at. The problem is that he received such few touches, his 11.8 possessions would place him 25th amongst the power forwards we previously examined.

Considering how obvious his presence is on the court, you have to think that if his coaching staff and teammates saw him as a viable offensive option, he would have received far more touches this past season than he actually didsince obviously everyone involved was looking to win as many games as possible. Subjectively speaking, it wasn't rare to see Thabeet become very passive on the court and only half-heartedly look for the ball. On top of that, his passing rate was very poor, the lowest in this group, and many potential possessions never even materialized due to his inability to make clean catches, leading to turnovers for others. It's not a stretch to say that his teammates did not have enough confidence in his offensive skill-level to get him the ball in the half-court.

Players drafted a high as Thabeet are usually expected to offer more than that offensively. At this juncture, Thabeet is still very early in his offensive development. He could continue along his current path, using his post possessions to slowly improve his usage rate, or he could continue to rely on his teammates and remain an efficient, but underdeveloped role-player
 B.J. Mullens can catch and finish as well as anyone, but he has an extremely hard time creating his own shot.

The third one-and-done center from Ohio State in as many years, B.J. Mullens did not have the type of year some expected him to have. Operating under the shadow of last year's outrageously talented freshman class, Mullens made some strides as the season went on. Before we talk about what held him back, lets to a look at what he already does well. His 1.41 PPP as a finisher was amongst the best in our entire database, which backs up the perception that Mullens is an unusually gifted athlete with very solid hands. Unfortunately, he only got 3.6 opportunities to finish each game, which was far below the average for big men we looked at. Possessing nice speed for a player his size, Mullens is also capable of getting up and finishing in transition according to his situational stats, but he didn't get all that many opportunities to do so, going 12/14 on the year.

On the block, Mullens scored .85 PPP on 2.8 possessions per game, which is not very impressive. His post game obviously lacks polish, and he clearly has a tendency to force the issue, which you can see in his incredibly poor passing rate, which rival only Hasheem Thabeet in this draft. Still, you would expect to see him get a few more touches in the post considering how few other offensive options Ohio State had this season.

Despite the lack of touches, Mullens had a relatively efficient year with the possessions he did receive, scoring %59.7 of his possessions, good for second amongst all centers. Blessed with awesome athleticism and possessing great hands, Mullens has some unique tools. However, he's going to need a lot of help to achieve his potential. He has more going for him than Thabeet did at that point in his career, but is nowhere near the defensive presence, and thus may very well have to develop his game while riding the pine, since he's not likely to get a lot of playing time right away. Mullens will have to put in the work in on his own if he's to earn playing time, and thus will have to develop a good deal of self-discipline with his work ethic if he's to reach his potential.
 Luke Nevill is huge, and was an excellent finisher at the rim in the Mountain West, but his physical limitations may make it difficult for him to contribute in the NBA.

Nevill got almost 4 touches per game at the rim as a finisher and shot 81% on those attempts, good for first amongst all the players we looked at. Clearly, his size and touch were simply too imposing for many of the centers he matched up with. He also got 8.5 possessions per game on the block, almost 55.5% of his offense. He scored .95 PPP on his touches, good for second amongst centers, but just above the average of .94 for power forwards. The news is not all good on Nevill though, as his 1.1 possessions per game from offensive rebounds ranks him fifth amongst the players on our list, and considering his size, level of competition, and the fact that many of the players on our list aren't legitimate prospects, that really is not a good sign. Nevill did get fouled on 19.6% of his half court possessions, the second most of any post player on our list. Nevill wouldn't be anything more than a third center in the NBA, but his finishing ability and size may give him a chance to be drafted.
 Goran Suton is easily the most unique player on this list, and it won't be his offensive skill set that keeps him from getting drafted.

After an impressive NCAA Tournament run, Goran Suton decided to decline attending the Portsmouth Invitational, but the numbers he put up during his final year at Michigan State make him standout in our analysis. Getting a fairly small 10.3 possessions per game, Sutton's 3.3 jump shots per game were only one-tenth of a shot less than the other eight centers on our list combined. Not only does Suton shoot the ball from the outside, he does it well ranking first amongst all our post players at 1.05 PPP. A below average finisher (1.19 PPP) who only gets 1.7 possessions per game in the post, Suton is the type of center that can spread the floor for a small back to the basket threat while running the pick and roll (.9 PPP) and rebounding the ball well on both ends. Suton isn't an ideal athletehe struggles to finish around the basket as mentioned, and doesn't get fouled on a good percentage of his shots (11.8%), but he's a skilled, heady player that has a lot to prove in the draft processpossibly starting in Treviso.

 Fenerbache Ulker has a bevy of young center prospects, but the two that will be eligible this year aren't as good as the two from last year.

After placing Semih Erden and Omer Asik in the second round of last year's draft, Turkish power Fenerbache once against features a pair of young center prospects. Gasper Vidmar could have been considered a prospect last season, but he took a big step back this season. After posting a PPP of .92 in the Euroleague last season, he regressed to only .75 PPP this year. Getting only 12% of his possessions in the post and ranking last in nearly every metric we measured, it seems like the playing time Vidmar received after Asik and Erden went down with injuries exposed his lack of NBA potential.
Oguz Savas finds himself on the other side of the spectrum, lacking ideal finishing ability, but scoring.93 PPP (3rd) in 6.4 post possessions per game. While Savas also scored 1.54 PPP off of 2.4 basket cuts per game, got fouled on 19% of his shots, and scored on 56.9% of his possessions (awesome for the Euroleague), he's carrying around a lot of extra weight and lacks the physical profile of an NBA player. His bulk limits his ability to defend a position or pursue rebounds (he's simply awful in this category), which all but eliminate his chances of being drafted.
Read Next...