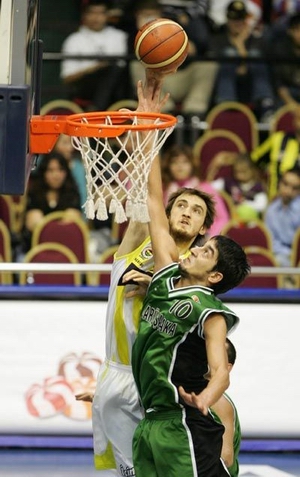 Luis Fernández
@DraftExpress
Still one of the most intriguing young big men on the Old Continent, Semih Erden is turning 22 years old this summer and, even if hes slowly making some strides, has still yet to blossom into a real force on the court. He just finished his Euroleague season averaging 6.7 points and 4.3 rebounds, in about 20 minutes per game, which is a decent improvement from last season, although barely significant on a per-minute basis.

Just an inch short of seven feet, enjoying a long wingspan, nicely athletic, well-built, Erden shows a very promising physical profile. Meanwhile, in the skill department, he shows a bit of everything, but is far from mastering any particular move, while he hasnt erased the doubts about his character and ability to stay focused on the game.

The best thing we can say about Erdens offensive arsenal is that hes pretty aggressive finishing around the rim, trying to secure his points with dunks, which makes sense since his touch around the basket is a bit inconsistent. He moves around the basket waiting for a defensive rotation that leaves him open on the paint, perhaps combining it with a cut at the right time, he also emerges active setting picks to roll inside, and can nicely run the floor, showing pretty solid hands to work with and always looking to hammer the rim.

3083
Erden also frequently asks for the ball in the low post, but the rawness of his skills here becomes quite visible. He might eventually come up with a great move, but generally speaking he shows improvable footwork and limited ability to net his jump-hooks with either hand (he uses both, although he clearly feels more confident with his right). Still, he shows a willingness to mix it up inside, and doesnt back away from contact.

Still potentially able to develop into a power forward (although he looks like much more of a center), Erden showcases his perimeter skills very rarely. His spot-up jumper is extremely inconsistent, as he can easily net a mid-range jumper and then air-ball the next attempt. He can also put the ball on the floor and attack his match-up, which had eventually ended up in a few phenomenal highlights (hes a pretty coordinated guy), but he never showed any continuity and it seems like its even a rarer feature lately.

Defensively, hes not an outstanding player, but neither looks a big liability. Hes quite a mobile big who can defend out of the paint and challenge his match-ups driving attempts with mild success (providing they are not very quick). Still he looks more comfortable guarding the low post, where he can rely on his length and his body. He can take contact and he doesnt often buy into fakes, keeping his position nicely. On the other hand, hes a rather poor team defender, as his defensive rotations are timid and not aggressive enough. Hes neither a great intimidator despite his length, although he eventually can collect a block (hes averaged almost one per game). Besides, you can sometimes see him looking disinterested in the game, like if its a great deal of work for him to react to whats happening on the court. It also happens in the offensive end, where he sometimes hangs around with apparently no defined purpose.

Anyway, given the potential Erden brings to the table, hes virtually a lock to be drafted, but his inconsistency will likely prevent him from hitting the first round.
Read full article

Kristian Hohnjec
@DraftExpress
If at some point of the regular season we thought that watching Semih Erden on court was going to be a rare privilege, frontcourt injuries for Fenerbahce Ulker and his own nice displays brought playing time for the promising Turkish center, a player that was already featured on the National Team in the World Championships last summer.

Erden is a very intriguing guy, not only a legit seven footer, but already a fairly strong and decently athletic center with an excellent frame and wingspan who can produce in the paint against veteran competition. Still, inconsistency has been the predominant chord in his game. He shows decent moves in the low post, but has a hard time putting the ball in the net unless he dunks it (he can consistently play above the rim). He also displays promising form on his shot, but still enjoys poor accuracy. He can even put the ball on the floor with surprising ease, although again he suffers to get the job done. Probably his highlight in this edition of the Euroleague was a slashing move he performed against F.C.Barcelona, driving with his right hand, then faking a pass to his left, followed by a lay-up, always with his right hand (quite Jason Williams-esqe). Certainly something you dont usually see coming from this type of player.

His defensive and rebounding potential is remarkable, given his body and mobility. He still lacks some reactiveness, but nothing to feel worried about for the future. However, his defensive commitment is not always equally strong. Erden lacks consistency in his effort and intensity, and sometimes just doesnt seem to be focused on whats happening on court. Still, with experience and maturity, he should emerge into a very valuable big man, perhaps first-round material down the road if he works hard. He's a type of player who usually impresses in every game, but only in very small doses.
Read full article

Luis Fernández
@DraftExpress
A player with very nice potential, he is yet to blossom, and was overshadowed in his team by the outstanding 1987 Turkish generation. Erden is quite a big guy, nicely athletic, with a good frame and a well-built body, and who is showing improving coordination. He delivered some nice moves in the low post, showing ability to finish with both hands around the basket, but he still needs to polish his footwork and get more in control of the situation. He also showed a decent shooting touch, although with limited range. He doesnt seem to have these natural basketball instincts that other guys show, but hes a player that clearly has worked on his skills.
Read full article

Luis Fernández
@DraftExpress
Like his countryman Bayav, he's a very long, athletic, and skinny big man, but even rawer while also one year older. Erden's game seems more oriented to the paint, showing some budding movements in the low post, but there remains a lot of work to do there. A great wingspan means his is a solid shot-blocker, too. His jumper is downright horrible, looking sometimes like he is throwing a brick. His sub-50% free-throw percentage is indicative of his ability. He needs to improve his mechanics because he doesn't follow through, and so he loses control over the ball. Despite his decent athleticism and speed, it seems as though he is the kind of player who arrives a little bit late to all the action, and that is a product of his physical immaturity. He needs to gain explosiveness.

This guy's all about potential right now. He doesn't transmit a great feeling for the game. But a big, athletic body like his always draws attention.
Read full article