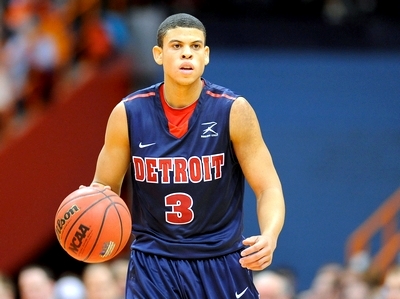 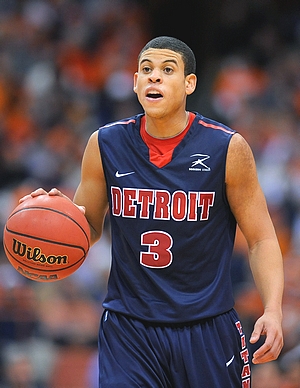 After a solid sophomore season, Detroits Ray McCallum has continued his strong play as a junior, showing steady improvement in his production, but being unable to secure a return to the NCAA tournament after losing in the semifinals of the Horizon conference tournament.

As weve mentioned before, McCallum isnt dynamic from a physical standpoint, with just average size and length for an NBA point guard prospect, but hes gotten stronger over the last couple years and hes a solid athlete, with good speed, quickness, and elevation, once hes built up a full head of steam.

Playing for his father at Detroit, McCallums role hasnt changed much over the course of his college career, but hes gradually taken on more of the scoring load, increasing his shots per-40 each season, while shooting career highs from the field as a junior, both inside and outside the 3-point line.

His perimeter shooting improvements are particularly encouraging, after shooting a very poor 24% from 3-point range as a sophomore. He connected on 33% of his 3s this season on over four attempts per game, and this is an area hell likely need to continue to improve in order to find a role in the NBA, as he still only made 29% of his overall jump-shots on the season.

McCallum actually shoots better off the dribble than off the catch at this stage, showing the ability to fluidly pull-up off the dribble in the mid-range or from behind the 3-point line, and doing a nice job of getting his defender on his heels to create space to rise up for his jump shot. He still takes some ill-advised pull-up jumpers at times, but he should be able to improve his efficiency with better shot selection on a team where he isnt forced to carry such a heavy scoring load.

McCallum has excellent ball-handling skills, plays the game at a nice pace and shows great poise. Doubling as his teams primary ball-handler and top scoring option, he generally does a very good job taking care of the ball and making good decisions, as evidenced by the fact that he turns the ball over on only 12% of his used possessions this season, second among all point guards in our top 100 rankings.

As weve written before, McCallum is at his best when he can get out in transition, but hes also done a better job this year of being more shifty off the dribble to create in the half-court, where he attacks the basket hard and finishes effectively at the rim, even through contact, as hes connecting on an impressive 61% of his shots in the basket area.

In todays pick-and-roll heavy NBA, McCallum will need to improve as the ball-handler in these sets, as hes scoring only .73 points per possession on pick-and-rolls this season. He lacks the burst of speed to turn the corner and get into the paint with regularity, and he also has a tendency to come off the screen and settle for contested jump shots. In all fairness, though, some of his struggles can be attributed to poor floor spacing, giving him less room to utilize his craftiness off the bounce, which would likely change at the NBA level.

The extent of McCallums playmaking ability may be something that we havent fully seen during his time at Detroit, given that hes also his teams go-to scorer and shot-creator. He has an outstanding feel for the game and shows good passing instincts in the open floor and driving-and-kicking to open shooters, but he doesnt function as a true point guard for his team at the college level, so its difficult to gauge how much that might change playing with different personnel.

As we noted before, McCallums average size and length may limit him somewhat as a defender at the NBA level, but he moves well laterally, has quick hands and anticipation skills, and shows good toughness. He competes hard for the most part, and should be able to focus more energy on the defensive end with less of a burden on him offensively.

While McCallum has played in a less competitive league than many of the prospects hell be compared to, he is far from unknown, being that he was a McDonalds All-American coming out of high school and has been on the radar for some time now. Detroit also played a strong non-conference schedule this season, including games against Pittsburgh, Syracuse, St. Johns, Miami, Temple, and Wichita State, giving NBA teams plenty of opportunities to evaluate him against stronger competition. Scouts will likely be disappointed by his early exit and poor showing in the Horizon conference tournament, but its likely that his team will get an invite to the NIT, where he could certainly use the added exposure.

McCallums inconsistent outside shooting, lack of elite physical tools and playmaking ability likely limits his upside as an NBA prospect, but his overall skill level and high basketball IQ at the point guard position should give him a strong chance to get drafted, whether he decides to enter this Junes draft or play his senior season at Detroit.
Read Next...