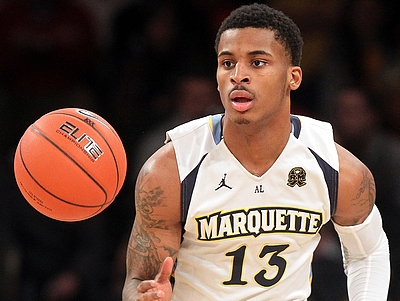 Derek Bodner
@DerekBodnerNBA
Vander Blue is one of the most athletic prospect in this class, but how much will his limitations as a ball-handler and perimeter shooter hurt his standing on draft night? 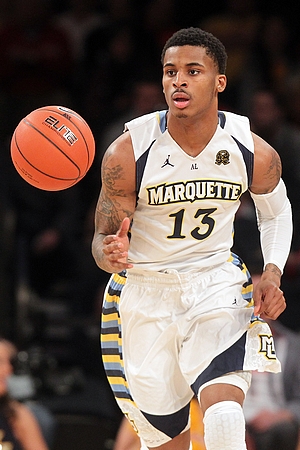 Vander Blue, a top-30 recruit coming out of high school, was somewhat of a disappointment in his first two seasons at Marquette. While Blue was a starter for virtually his entire sophomore season on a team that advanced to the Sweet 16, his personal productivity and offensive game never progressed far enough to match his lofty expectations.

As Marquette lost Darius Johnson-Odom and Jae Crowder, they needed Blue to step up and replace some of that production. Blue responded by upping his production substantially, from 12.2 points per 40 minutes pace adjusted to 18.3. Blue was particularly impressive in NCAA Tournament play, averaging 18.3 points per game while shooting 36.8% from three point range during Marquette's run to the Elite Eight.

The most notable change in Blue's game has been the emergence of a somewhat-reliable jump shot. According to Synergy Sports Technology, Blue, who shot 23.3% on jump shots last year, improved that number to 35.8%. The improvement in efficiency would propel Blue from the bottom 15% of the NCAA to the 59th percentile. His numbers improved across the board, including in catch and shoot situations ( 0.708 points per possession to 0.938), jump shots off the dribble (0.4 points per possession to 0.928), mid-range (0.667 to 0.825), and from three point range (0.75 to 0.905).

From a technical standpoint, Blue has much better balance and much less wasted lower body movement than in years past, and a more consistent follow through, improving on the hitch and inconsistent release he had last season. It's still far from perfect, and he can at times see his form and balance break down, particularly when under duress, but it's a vast improvement over where it was in years past. Blue must continue to work on extending his range, as he still struggles with consistency at the collegiate three point line (30% 3P%), and being able to extend this out to beyond the college three point line and make it a consistent weapon from NBA range will be a key in his being able to find a role at the next level.

When creating for himself, Blue is most comfortable in pick and roll sets. He has improved dramatically as a shooter off the dribble, showing a much better in-between game. It is in pick and roll sets where Blue is able to use his athleticism and get to the basket off the dribble with the most regularity, using the space created off the pick and his excellent athleticism to his advantage.

As a finisher once he gets into the lane, Blue is mostly a mixed bag. He has excellent elevation and body control in the paint, and he can at times show improved touch with his right hand. He has very little finishing ability with his off hand, however, and he generally prefers to avoid contact and settle for more of a finesse game when finishing in traffic. Despite being asked to create more in the half-court, his free throw rate dropped this season, from 5.3 attempts per-40 to 4.5 this season, which is a very poor rate considering how athletic he is and how much he handles the ball.

Blue still provides considerable value off the ball. His athleticism makes him a terror in transition, which still constitutes 20% of his offense, down from 32.5% of his offense during his sophomore season, where he was mainly an afterthought in the half-court. He also moves well off the ball, using his speed and quickness to make strong cuts to the basket. As mentioned before, he seems to be slightly more in control finishing around the basket, but developing his left hand and showing an increased willingness to absorb contact and get to the free throw line would help him in this regard.

Blue's lack of comfort handling the basketball in the half-court is one of his main deficiencies that currently holds him back from being a regular creator on the offensive end, as he has a high, somewhat out of control dribble with little ability to change direction, and can become turnover prone in traffic. His ball handling prevents him from really taking advantage of his tremendous athleticism.

Blue has shown some ability as a passer in years past, but with his change in role this season, he has looked to score more, and at times has had tunnel vision. His lack of advanced ball handling and shot creating abilities further limits his ability as a distributor, and overall his pure passer rating of -3.39 rates among the worst guards in our top 100 prospect rankings.

On the defensive side of the ball, Blue's athletic profile presents plenty of intrigue. Slightly undersized for a shooting guard at 6'4", Blue makes up for this with excellent length, a solid frame, and good lateral quickness. When he gets into a good defensive stance, Blue is capable of moving his feet well and changing direction, and does a very good job using his length and quick hands to force turnovers and generate transition opportunities for his team. He likes to play the passing lanes, and at times can get caught roaming off the ball a little bit too much, and at times can struggle fighting through screens, but he clearly has the potential and likelihood to provide value on the defensive end at the next level.

Vander Blue is far from a complete product, and still has plenty of work to make himself into a complete offensive basketball player. While he still has considerable work to do in order to make his jump shot more consistent, and to continue extending the range on his jump shot out further, the improvement he has shown in his jump shot was a very important step for him to make in order to cement himself as a legitimate prospect. If Blue can continue to round out his offensive game, his combination of physical profile and defensive potential make him an interesting gamble for an NBA team.

Blue is one of the younger juniors in his class, not turning 21 until this July, so it wouldn't be outrageous to suggest that he still has considerable upside to continue to improve. If he doesn't get drafted, which is not a certainly at this point considering he was one of the last players invited to the NBA Combine, he could be an interesting prospect for teams to keep tracking in the D-League to see if his ball-handling, perimeter shooting and basketball IQ continue to develop.
Read Next...