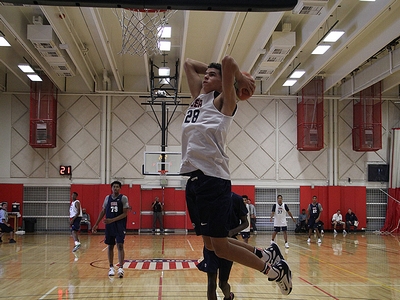 Strengths
-Has terrific size for a small forward at 6-9 ½ in shoes. Also has a 7-foot wingspan. Big enough to see significant playing time at power forward if needed
-Fluid athlete who gets off the floor quickly and has some nice explosiveness
-Has beautiful shooting mechanics both with feet set and off the dribble. Has a high release point and smooth follow-throughimpressive at his size
-Can create his own shot. Mixes in crossovers. Has nice footwork and a solid first step
-Attacks closeouts nicely
-Extremely impressive in the mid-range area. Creates separation from defender with great body control and sharp pull-ups.
-Can toss in pretty floaters from difficult angles with nice touch
-Shows really nice instincts blocking shots and getting in the passing lanes. 1.9 steals and 2.5 blocks per-40 at Nike EYBL (20 games)
-Shows potential as a perimeter defender

Weaknesses
-Does not possess a great feel for the game. Partially a product of his late-blooming status and lack of high-level experience
-Not a great passer. Averaged more turnovers than assists at EYBL
-Doesn't always know how to utilize athleticism in the half-court
-Shot-selection can be very questionable times. Telegraphs what he wants to do
-Tends to settle for very difficult shots at times. Will go through stages where he shoots it every time he touches it.
-Relies very heavily on pull-up mid-range jumpers as a source of production, which is not ideal in today's basketball
-Lacks the strength needed to finish around the basket through contact at times
-Motor, effort level comes and go on defense. Looks very upright at times. Allows himself to get beat off the dribble
-Asthmatic, which affects his conditioning significantly at times. Looked very winded with the extreme altitude in Colorado Springs

Outlook: Late-bloomer who virtually came out of nowhere this spring/summer to emerge as a consensus top-10 recruit. Struggled initially, but came on strong as the Camp moved on. Lacks a great deal in terms of experience and coaching, but has substantial talent to continue to improve. Has already made significant progress with his frame in the time he's spent at IMG Academy. Added 15 pounds from June to October according to our measurements. Seems to have a very good attitude and a strong work ethic, which bodes well for his chances of reaching his full potential. Will likely see a significant amount of playing time at the power forward position in college and the NBA, as he has extremely potent mismatch potential there. Due to the fact that he turns 19 in the 2016 calendar year, and is technically a fifth year prep player, Isaac could likely be eligible for the 2016 NBA Draft if he decided to. He told us in an interview that he is currently leaning towards honoring his commitment to Florida State, as he wants to enjoy the college experience.

Strengths
-Nice size for a wing at around 6'9 in shoes
-Has added eight pounds (now 203 lbs) since the Nike Academy in June. Still a bit thin but his frame is definitely improving.
-Outstanding fluidity for a player his size. Really smooth. Good body control. Glides in transition.
-Explosive leaper who plays above the rim with ease. Catches lobs.
-Polished skill set and IQ.
-Can grab a rebound and go coast to coast. Uses his long strides and athleticism to straight line drive in the half court. Strong first step. Tougher attacking the basket than he gets credit for.
-Really smooth shooting stroke. Nice base. Good rise on his jumper. Can make spot threes but prefers to shoot it off the bounce. Loves hesitation pull ups. Able to create space with step backs  not something you often see from a player his size.
-Showed some ability to defend the perimeter. Not completely proven in that area but he did get down in a stance and move his feet well while defending wings.
-Good instincts on the glass. Not much of a banger but has a nose for the ball, especially on the offensive glass.

Weaknesses
-Frame is improving, but he's still fairly thin for a combo forward. Shoulders aren't all that wide. Very thin legs. How much bigger will he get?
-Doesn't have great length relative to his height (6' 10.5 wingspan)
-Not a great ball handler at this stage. Can attack in a straight line or handle in transition, but he struggles a bit versus pressure. Doesn't change direction or speeds all that well.
-Can improve his ability to finish through contact
-Gets swallowed up in the paint at times on defense/the glass.
-Fairly right-hand dominant around the rim
-Still has to prove himself as a perimeter defender
-A year old for his class

Outlook: The coach's son possesses a very impressive blend of size, fluidity, explosiveness, shooting touch, and basketball IQ/instincts that's going to make him a marquee player at whatever school he decides to attend. Porter figures to have major success as a face-up power forward at the college level, but the key for his NBA stock will be making the transition to the small forward spot, especially given his frame and average length. Improving his perimeter defense and handle will be key, but Porter is well ahead of the curve skill wise for most players in his class.

Strengths
-One of the best defenders at this camp. Guarded every position on the floor over the course of the weekend, and generally shut down whoever he was matched up with
-Has tremendous footwork and lateral quickness. Plays with an extremely high motor. Takes a huge amount of pride in his ability on the defensive end
-Career 2 steals and 1.5 blocks per-40 at the EYBL and U16 FIBA Americas level.
-Very aggressive looking for scoring opportunities.
-Displays some nice passing ability at times
-Jump-shot isn't broke. Should be able to develop into a decent shooter in time
-Has huge feet, which indicates he may not be done growing yet, especially when considering he's only 16 years old.

Weaknesses
-Undersized for a power forward, the position he looks best suited for offensively at the moment, standing somewhere between 6'7 and 6'8. Does not have great length to compensate for that
-Offensive skill-level is a work in progress. Takes a lot of outside shots, but did not find very much success with it at this camp.
-Ball-handling skills are rudimentary

Outlook: Easy to fall in love with his multi-positional defense, but is a major work in progress on the other end of the floor. Somewhat of a tweener at the moment. Will need to either grow or substantially improve his skill-level. Seems likely to do both.