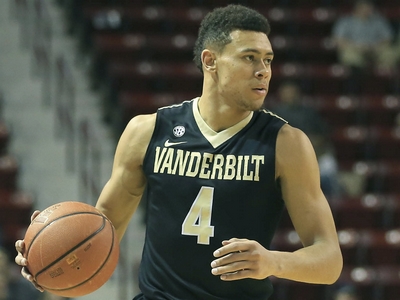 After taking over the starting point guard spot for Vanderbilt midway through his freshman season, Wade Baldwin was in prime position to make a massive jump forward for Kevin Stallings and the Vanderbilt Commodores as a sophomore.

In many respects, Baldwin's sophomore campaign was a success. He finished the year averaging 14.1 points, 5.2 assists, and 1.2 steals per game, helping the Commodores bounce back from a disappointing mid-season stretch to finish with a 19-12 regular season record and an NCAA tournament appearance, where they lost in the play-in game to Wichita State.


Baldwin's excellent physical profile, which has him standing 6'3 in height, with a ridiculous 6'10 wingspan and a well-built frame, creates quite a bit of intrigue around him as a prospect, especially on the defensive end, where his size and lateral mobility give him the potential to defend two positions down the line, versatility that decision makers are always craving.

Offensively, the first thing that jumps out on Baldwin, both on his stat sheet and when watching film,
is his perimeter shooting, as he's made 40.6% of his 199 three-point attempts during his two seasons in college. He's most prolific as a shooter off the catch, where he shot 42% on the season and over 43% when left unguarded, both numbers which, when accounting for the fact that the vast majority of those attempts were from three-point range, were well above average, yielding 1.246 and 1.267 points per shot, respectively, according to Synergy Sports Technology.

Baldwin was much less comfortable as a shooter off the dribble, despite yielding 0.829 points per shot on such attempts, a better-than-average figure. When watching him in game situations, the results off the dribble were pretty inconsistent, with pronounced hot and cold spells which made it a tough facet of his game to rely on. Baldwin doesn't get a lot of elevation on his jump shots and has a low release point that's almost out in front of his body, which makes his shot a little bit easier to contest, and thus requires more time and space to get it off, factors which could impact his effectiveness pulling up off the dribble, and creating shots overall for himself and others, at the next level.

The other main problem with Baldwin in a half court setting is his struggles both getting to, and finishing, in the paint, struggles which exist for a multitude of reasons. Baldwin is fast when he has built up a head of steam, something which becomes evident in transition, but he lacks the elite burst to turn the corner on a defender in the half court, and struggles to get into the paint because of it. He doesn't offset this with an overly advanced dribble, either, and doesn't change speeds, or direction, quite as well as you would want in a primary ball handler. Finally, when Baldwin gets into the paint he has only average explosiveness around the hoop, and his lack of a consistent in-between game --- both in the form of pull-up jump shot or a floater in the lane  makes game planning against him relatively easy for a defense.

Baldwin does have a strong, developed upper body, and he uses that to initiate contact and get to the free throw line at a rate of 7.7 times per 40 minutes, pace adjusted, an incredible rate for somebody of his relatively low usage. This helps offset some of his struggles at the rim, but shooting just 38% on half court shots around the basket, as Synergy has logged for Baldwin, is something he's going to have to improve upon significantly at the next level.


Baldwin's struggles to really turn the corner and get into the paint with regularity also limit him somewhat as a shot creator for others. He is a willing, and able, passer, who has some creativity, both out of pick and roll situations and on drive and kicks, but he can force the issue at times driving to the hoop, leading to both offensive foul calls and getting himself in dangerous situations without having a plan on how to pass out of them. He can also get sloppy with a handle that all too frequently is high and off balance, which both limits his ability to turn the corner, but also makes him prone to being stripped of the ball more often he ideally would, and overall his 3.6 turnovers per 40 minutes, pace adjusted, is the second worst mark among point guards in our top-100 rankings, are a clear area in need of improvement.

Defensively, Baldwin's size, with his elite 6'10 wingspan and developed upper body, gives him a considerable amount of potential to defend either guard position. When engaged, Baldwin is close to realizing that potential, as he has the lateral mobility to stay in front of his man, the length to close out and contest shots, and the strength to fight through screens. The problem is Baldwin is too frequently not engaged, and can be prone to being caught sleeping off the ball, especially ball watching looking for passing lanes to jump. Still, he has enormous potential on this side of the court, the effort is mostly there, and it's easy to envision him becoming a plus defender in the NBA.

The foundation that Wade Baldwin possess  ability to hit an open shot, willingness to set up his teammates, size to be a force defensively  is a very attractive combination for NBA teams in need of guard depth, and should make him a relatively safe bet to be a contributor at the next level. Still, there's a lack of refinement  in his ball handling, in his ability to shoot off the dribble, in his lack of understanding of the nuances of creating space with misdirection and changing speed  that suggests he's far from a finished product, which creates a player with considerable room for growth, but also one who could ultimately become frustrating if he never reaches his full potential. Baldwin's propensity for accepting coaching, being a positive teammate, and overall mental makeup will play a major role in his ability to reach his ceiling.
Read Next...