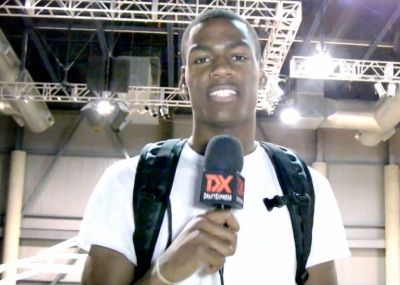 Richard Walker
@DraftExpress
Continuing the coverage of our stop at Impact Basketball in Las Vegas, where there were nearly 30 potential draftees preparing themselves for the next level, we check in on the progress of Alec Burks and Jordan Williams.

At Impact, Joe Abunassar and his staff put each player through extensive workouts both on the court and in the weight room 5-6 days each week, keep them on an all-encompassing nutrition plan, and unlike many other training centers, have the ability to hold full five-on-five games on a daily basis. In the second of our three part series on prospects working out at Impact, we'll take a look at one player who has made major strides in his conditioning in Jordan Williams and see what Alec Burks has been working on as he prepares to vie for a spot in the lottery.

One of the most highly touted players here training at Joe Abunassar's Impact Basketball, Alec Burks impressed us with his fluidity in drills, ability to put the ball on the ball on the floor in competitive player, and the improved consistency of his shooting mechanics with his feet set.

Unlike some of the other players here, Burks was the clear-cut star on his college team. Considering his high usage and productivity at Colorado, Burks has been working on adding some moves to his scoring repertoire and polishing the offensive tools he displayed regularly for the Buffalos. We saw some promising strides from Burks as we watched him go through extensive shoot-arounds, participate in two skill development sessions under the tutelage of Chauncey Billups, and play a few games of three-on-three.

Perhaps the most positive sign was the way he shot the ball in drills. Whether he was simply catching and shooting the ball from three or pulling-up off the dribble, Burks made a concerted effort to stay on balance and not fade in any particular direction. His efficiency declined significantly when he failed to do that last season and was one of the main reasons he shot just 29% from three-point range. It will help him immensely if he can bring a more controlled perimeter scoring arsenal to the smaller role he'll play at the next level, and what we saw at Impact was a step towards that end.

In the skill development sessions, we got to see Burks, along with Kawhi Leonard and Malcolm Lee, work on a number of different spin dribble, step-back, and aggressive scoring moves under the watchful eye of Chauncey Billups. Burks was the smoothest of the three off the dribble, and while he didn't show awesome explosiveness, he proved in three-on-three competition that he can use his length and skill-level to get to the rim and draw additional defenders to open up easy opportunities for teammates. Unfortunately, the rules of the three-on-three session prevented us from seeing Burks take many jump shots under game conditions, but his play defensively was very solid and he looked good overall.

Amongst all the prospects we saw this week, Burks seemed to be the most comfortable in his own skin. He's not a freak physically, but at just 19 years-old, he's looking to improve his skill level and pack weight on his frame. With his versatility and length for a shooting guard, Burks's ability to translate the work he's done at Impact on his jump shot into whatever situation he lands in next season will be worth keeping an eye on.

One of only a handful the highest ranked sophomores big men to keep their name in the 2011 draft, Jordan Williams has carried on one of the more positive trends we often get to see develop in these private workouts year to year.

When we saw Williams in Las Vegas, the first thing that jumped out to us was how much weight he appeared to have lost. Every year at least one big man seems to take the extra steps to overhaul their frame to improve their draft position. Last season, that player was Derrick Caracter, and this season, that player is Williams. He's lost somewhere in the ball-park of 10 pounds so far, but looks significantly trimmer as you'll see in the video below, and the positive changes he's making are clearly paying off.

Not only has Williams put in some serious work on his body, he's also made a considerable effort to add to his game. Williams was one of the few players in three-on-three competition not named Jon Diebler confident enough to attempt jump shots under the one-shot-and-out rules the prospects were playing under. We didn't see much in the way of a midrange game from Williams at Maryland, but his form looks compact, consistent, and is definitely a notable development in his arsenal.

Williams is not a freak athlete, but his weight loss and development as a potential pick-and-pop option at the next level are intriguing. Jockeying for position with a number of longer, more athletic big men, if Williams can continue making progress and show what he showed us to NBA decision-makers, he's going to surprise some people and fit into some roles that we couldn't have penciled him into during the college season.