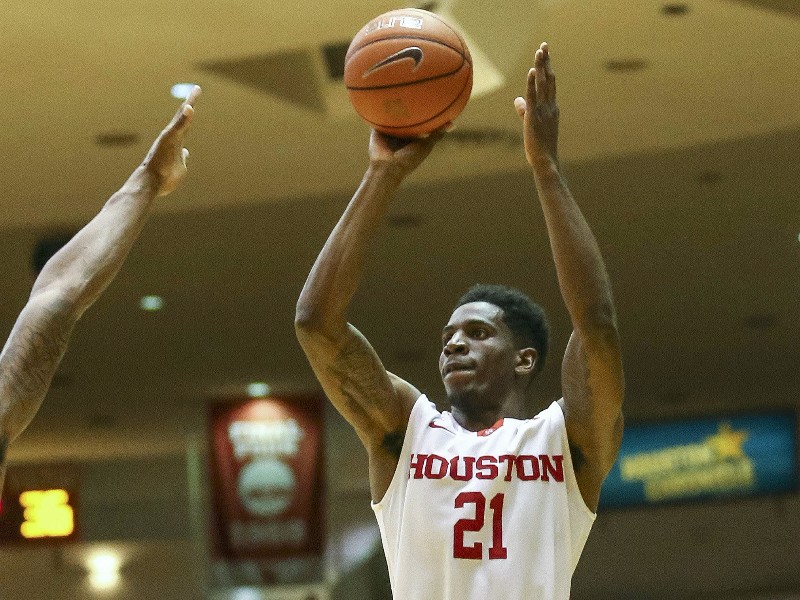 Josh Riddell
@Joshua_Riddell
Despite not being considered an elite-level recruit coming out of high school, Damyean Dotson has been on the radar of NBA for quite some time after a strong freshman season that saw him named to the All-Pac 12 freshman team and invited to try out for the 2013 U19 USA Basketball World Championship team. Dotson started his career with Oregon but was unceremoniously dismissed from the team for his involvement in sexual assault allegations, an investigation that was eventually dropped due to a lack of evidence. After sitting out the 2014-15 season, he signed with his hometown school the University of Houston where he has attempted to rebuild his image, and a strong two years to end his collegiate career has placed him firmly back on NBA radars.

After averaging 20.3 points and 8.1 rebounds per 40 minutes on a 61% true shooting percentage as a senior, and being named a First Team All-AAC member, Dotson was able to secure an invite to the Portsmouth Invitational Tournament where he was named the MVP after a strong three game performance, including winning the PIT championship. Building off that performance, he earned a spot to the NBA Combine, and had a solid showing there as well, which has helped him expand his exposure among NBA teams leading up to the draft.

Measured at 6'5.5 with a long 6'9 wingspan, Dotson has very good size and length for the shooting guard position but he will need to improve his strength, especially in his base, to hold his own against NBA guards and wings. His best athletic tool is his open court speed which allows him to get up and down the floor in transition where he scores an efficient 1.2 points per possession. He doesn't dominate the game with his athleticism, but relies more on his skill-level and basketball IQ to read the floor and make the right play.


Dotson excels in catch and shoot opportunities and with the increased emphasis on shooting in the NBA, this will be his ticket to the next level. On 195 catch and shoot jumpers logged by Synergy Sports Technology he converted 47.2% of his attempts, which ranked fifth among all D-1 players with at least 150 attempts. He is deadly from spot-up situations or on the move, either off cuts or running off screens as he sees the floor well and is able to get to his spots before he quickly gathers himself, sets his feet, and rises into his shot after the catch.

His 44.3% three point field goal percentage ranked second among all shooting guards in our top 100 last season (on 8.9 attempts per 40 minutes which tied for the most in our top 100) and while his perimeter shooting is a major feather in his cap, scouts still have questions about what else he can bring to the table offensively. He isn't particularly adept creating with the ball in his hands, either in pick and roll or isolation chances or when attacking closeouts. He lacks a degree of shiftiness as a ball handler, with many of his drives ending in contested long two point attempts. Dotson is a terrific shooter off the dribble as he knocked down 41% of his pull-up jumpers according to Synergy Sports Technology, but will need to continue to improve his shot-creation ability to create more efficient shots at the next level.

Dotson has impressed with his passing skills in the pre-draft process, averaging 7 assists per-40 minutes in five games at the NBA Combine and PIT, and improving that facet of his game will give him the versatility to play any of the three backcourt positions and allow him to fit into a variety of lineup configurations. While he's never been turnover prone at the college level, he did average a meager 1.5 assists per-40 minutes for his career (1.4 as a senior), so there are question marks about why he wasn't able to demonstrate this part of his game earlier on.

NBA teams will likely also want to see Dotson become a more proficient finisher inside the paint in half-court situations. He took a very small number of shots inside the paint in the half-court, and wasn't overly physical trying to draw contact either, with his 1.9 free throw attempts per 40 minutes being the second fewest among all players in our top 100. Dotson can certainly make shots, but becoming a more aggressive threat inside the arc when run off the three point line will help him avoid being labeled a one-dimensional player.

Dotson complements his spot-up shooting by being a tough on-ball defender, which could help his cause as a 3 and D role player for a NBA team. He is adept at moving his feet to stay in front of penetration, and challenges shots well with his length after containing drives. He will need to add bulk to his frame to avoid being pushed around by stronger opponents, but he has the tools to be a solid defender against guys his size, and may be able to swing onto both PGs and SFs in time versus bench lineups.

Dotson also helps his team finish possessions by crashing the defensive glass, where his 6.3 defensive rebounds per 40 minutes ranks third among shooting guards in our top 100. He is committed to rebounding and has a good nose for the ball that allows him to track down loose balls when attacking rebounds from the perimeter.

Off the ball, he has some improvements to make to become a more well-rounded defensive player. He takes poor routes when following cutters around the floor, as he tries to avoid contact while being screened. He is also a little out of control when closing out on perimeter shooters, with a tendency to fly past his man and swing his arms wildly instead of closing out on balance. He has shown some potential as a defensive prospect but will need to improve his technique to emerge as a stopper, which would greatly help his cause of sticking on a NBA roster.

Although he is one of the oldest players in our Top 100 at 23 years old, Dotson's ability to knock down shots from the perimeter will have teams taking a hard look at him in the second round or as a free agent. He may need some time in the D-League to round out his offensive profile, but if he can continue his strong play in summer league and training camp, he could easily find himself on a two-way contract or possibly on a NBA roster to start the season.
Read Next...