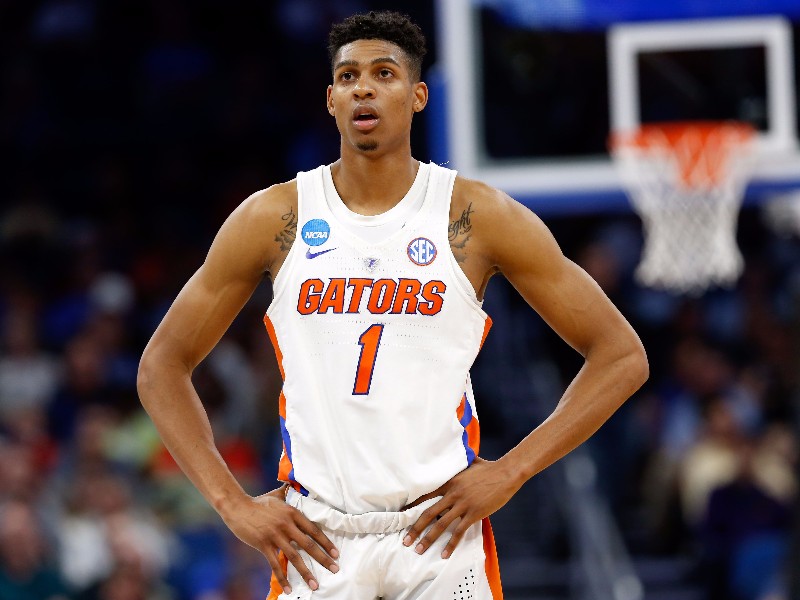 Ryan Thomson
@rthomson9
NBA scouts and executive travel the globe searching for forwards with size, length, athleticism, defensive versatility, and shooting potential. The game is as small as ever, and finding a reliable combo forward is a priority, making a player in the mold of Florida junior Devin Robinson an appealing option outside of the top forward prospects in the 2017 NBA Draft.

The Virginia native decided to forego his senior season with the Gators after a solid junior year in which he averaged 16.8 points, 9.2 rebounds and 1.3 steals per 40 minutes, while knocking down 39.1% of his 3-pointers.

A physical specimen, Robinson looks the part of an NBA forward with his chiseled upper body and explosive athleticism. He measured well at the NBA combine - 6'8.25 with a 7.0.75 wingspan - and posted a 35.5 no step vertical, the second best mark of all participants. He's still quite light at 190 pounds, concerning considering his age, but overall he has the tools that make scouts wonder what kind of player he could be in an up-tempo, switch heavy system with the floor spaced and ball movers next to him.

Robinson steadily improved in his three seasons at Florida, raising his averages in nearly every statistical category, but at this stage, still lacks much offensive versatility. Robinson's athleticism plays a large role in his offensive success, both in transition and on the offensive glass. His length and explosive leaping ability shine through when he's filling the lanes and finishing above the rim in transition, where he averaged 1.36 points per possession, ranking him in the 91st percentile among qualified players according to Synergy Sports Technology. In the half court he is able to use his length and leaping to his advantage on the glass, where he averaged 2.6 offensive rebounds per 40 minutes.

Aside from his athletic gifts, Robinson was mostly limited to being a spot up shooter or straight line driver role in the Florida offense. When Robinson was run off the line, he had some success getting get to his pull up game, making 37.5% of his dribble jumpers. Overall though, Robinson is pretty limited in terms of perimeter skill, as he isn't comfortable creating offense for himself or teammates. He plays the game very high and rigid and struggles to handle versus defensive pressure, being unable to create space.

He saw only 4.8% of his total possession in pick and roll action, and for good reason, as he was typically unreliable as a playmaker, evidenced by his poor 4.8% assist rate, which is the worst mark among all wings or forwards in the DX Top 100 prospect rankings. In addition to his underdeveloped feel for the game, Robinson struggles to create much as a slasher with a man on his hip, largely due to his struggles playing through contact and desire to load up off of two feet, rather than elevate to finish off of one. Florida found a way to hide some of Robinson's deficiencies by allowing him to play consistent minutes at the power forward position, which may very well be his most advantageous position at the NBA level, as he'll have more space to operate and more time to get off his jumper.

Robinson has steadily improved as a shooter in his time in Gainesville, making 43-of-110 three-point attempts this season for a mark of 39.1% while shooting 72.3% from the free throw line. Robinson is a bit of a streaky shooter, making only 34% of his career three point attempts in three seasons, and needs time and space to get his jumper off. His shot is a bit mechanical and he may have some trouble initially with getting it off versus NBA length and defenders, but his improvement this season is certainly a welcome sign in a shooting and spacing-heavy league like the NBA.

While Robinson certainly looks the part of an NBA combo forward, his defensive effort and consistency often leave scouts wanting more. He has the physical tools to suggest that he should have been a defensive nightmare for opposing coaches in the SEC, and at times he was, guarding a variety of positions, including opposing point guards. If his best position going forward is as a small-ball power forward, he certainly has the potential to switch some actions, although he doesn't quite have the physical toughness or strength to check a traditional fours at 190 pounds.

Off the ball, Robinson has a tendency to lose track of his man and give up wide open looks from beyond the arc. He needs to improve his focus and attention to detail on the defensive end, particularly since he hasn't displayed much interest in being a physical defender, raising concerns as to what positions he will truly be able to guard at the next level despite his physical tools. Robinson has, however, shown a willingness to crash the glass, averaging 6.6 defensive rebounds per 40 minutes as a junior, which is encouraging.

Robinson's average feel and perimeter skill combined with his inconsistent focus and effort on the defensive will likely relegate him to second round status come June 22, but he becomes more and more intriguing the further you get outside of the top-30, especially with the way the league is trending. Although he's had his ups and downs, and is the age of a college senior, Robinson's physical profile, defensive versatility, and shooting potential make him worthy of a second-round flier, especially with the recent growth and use of the G-League.
Read Next...