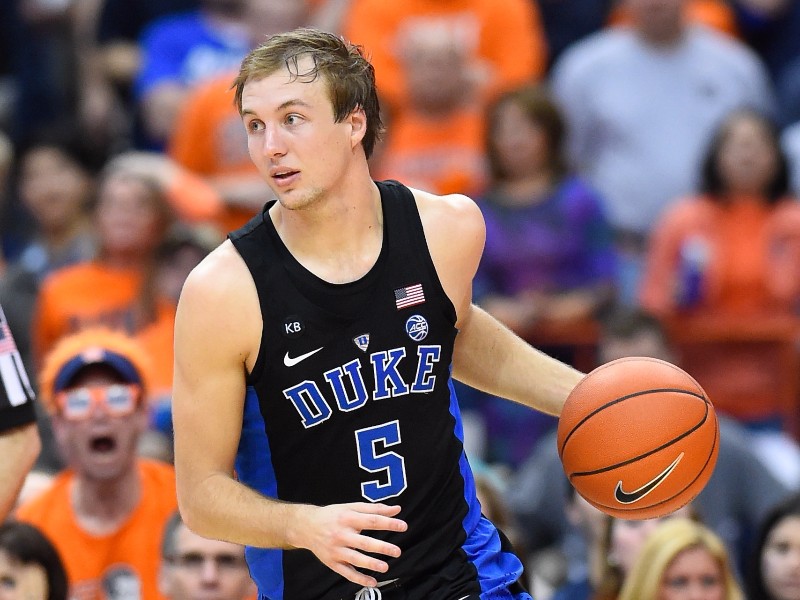 The #21 recruit in the 2015 high school class, Luke Kennard was a McDonald's All-American and USA Basketball fixture who surprised somewhat by developing into one of the best players in college basketball and a potential lottery pick already as a sophomore.

Kennard had a solid, but hardly overwhelming freshman season, averaging 12 points per game in 27 minutes, and shooting just 32% for 3, before absolutely exploding as a sophomore. He finished as the second best scorer in the ACC at 19.5 points per game, and did so on tremendous efficiency (53% 2P%, 44% 3P%, 86% FT%) earning him ACC First Team All-Conference Honors.

Physically, Kennard has solid height for a shooting guard at around 6'6, but otherwise has plenty of question marks about his profile. His wingspan is shorter than his height at 6'5 ¼, and his frame hasn't added much bulk in recent years, weighing 196 pounds at the NBA Combine, only seven pounds heavier than three years ago with USA Basketball. He's also not a great athlete in a traditional sense, lacking standout quickness and explosiveness.

What Kennard lacks in measurables he makes up for with tremendous skill, savvy and productivity. He played the game at a different speed than almost anyone at the college level this season, using polished footwork, body control and feel to get to different spots on the floor and compensate for his just-decent tools. He came up big time after time in clutch moments in some of the most important games he competed in, showing a level of swagger and confidence that grew on NBA decision makers over time.

Kennard possesses outstanding scoring instincts from all over the court, but his advantage on offense starts with his elite-level shot-making ability. He converted a sky-high 44% of his 3-pointers this past season, with many of them coming on very high degree of difficulty attempts. He moves off the ball intelligently, constantly relocating based on where the ball is and how the defense is reacting, and only needs an instant to get his shot off thanks to his super quick release and excellent shot preparation.

Far more than a spot-up shooter, Kennard is excellent coming off screens, and is also lethal pulling up off the dribble. He has very good footwork and timing attacking closeouts, using head-fakes, pump-fakes and terrific body control to shed his initial defender. He will not hesitate to use side-steps to quickly relocate behind the arc, or take one dribble inside the arc and pull-up for a mid-range step-back, often throwing in a slight fade for good measure.

Kennard really improved with his ability to initiate offense this season, partially out of necessity on a Duke team with no point guard on the roster. He was very functional operating out of the pick and roll, in no small part due to his shot-making prowess, but also because of his ability to find the open man. Kennard sees over the top of the defense at 6'6 and is a very willing facilitator who almost never turns the ball over. He makes quick reads and decisions within the flow of the offense, seeing things evolving on the court and adjusting on the fly with a very high basketball IQ. There are some NBA people that feel he has legit combo guard potential with his strong handle, impressive vision, and ability to make shots off the bounce, something that would certainly boost his NBA prospects.

Kennard's first step is average, and he doesn't put all that much pressure on the rim, certainly not from a stand-still. He has a knack for slowing down and speeding up instinctively, keeping defenders on their heels (or his back) and using his body to create the space he needs to get his shot off. He has very soft touch on his floaters, being nearly ambidextrous with his finishes, often using the glass or throwing the ball in the basket from very difficult angles.

With that said, there are some concerns about how this part of his game will translate to the NBA level, as he often seemed to be just barely getting by already at the college level. He struggles to finish over length due to his underwhelming explosiveness and extension around the rim, and he couldn't always turn the corner against quicker players in college. Some of the moves in his arsenal, for example killing his dribble and using reverse pivot moves inside the paint, may simply not translate against bigger, stronger, longer and more athletic defenders. How sustainable his 53% 2P% and high free throw rate this season will be in the NBA is a real question mark, and how well he'll adapt his game in turn will be very important.

The biggest question marks NBA people have about Kennard undoubtedly revolve around his defense. He has an unappealing combination of short arms, average lateral quickness, and a just-decent frame that already puts him at a significant disadvantage right off the bat. He compounded that this past season by demonstrating a distinctly low energy level, playing with very little urgency and getting lost off the ball frequently, although some of those issues plagued the entire Duke team as a whole. Regardless, there are real concerns about whether Kennard is the type of player a NBA team will need to hide on that end of the floor, as he's probably not quick enough to defend most guards, and seemingly lacks the length to contain bigger wing players.

Kennard showed flashes of toughness and smarts at times during the year, for example with the way he attacked the glass, got deflections, and generally used his excellent anticipation skills to his advantage. Those moments were far and few between, though, and were mixed in with some very ugly possessions. He will have to rev up his intensity level significantly and learn how to use his IQ to become a more sound positional defender, something that will go a long way in deciding whether he ends up being just another guy in the NBA or a real difference maker.

Kennard is an unorthodox prospect who worked on his game obsessively the past few years to polish up his skill-level and emerge as one of the best players in the NCAA this past season. High-level shot makers with size, vision and feel are all the rage in today's NBA, and Kennard will be drafted accordingly high and get every chance to show his game can translate to the next level.
Read Next...