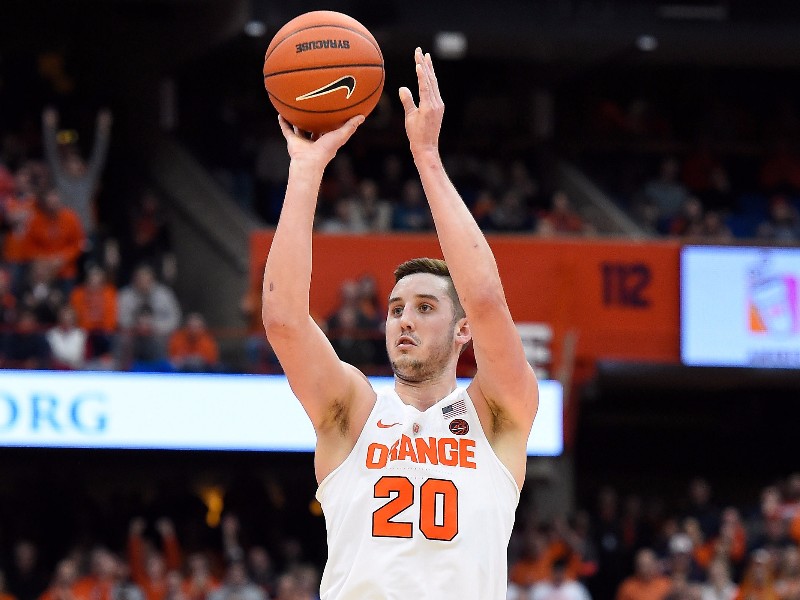 A consensus top-75 prospect in the high school class of 2015 coming out of New Hampton Prep, Tyler Lydon played a significant role averaging 10.1 points and 6.3 rebounds per game coming off the bench as a freshman for a Syracuse team that turned things around late and made an unexpected run to the Final Four.

One of the more highly regarded returning prospects in the ACC, Lydon figured to play a prominent role for Jim Boeheim's newcomer-heavy 2016-2017 squad, and that he did, playing as many minutes as almost any player in high major hoops.  The New York native earned All-ACC Honorable Mention honors, averaging 13.2 points and 8.6 rebounds per game on similar per-minute numbers to his freshman season, helping the Orange to 19 wins and an NIT berth before opting to declare for the 2017 NBA Draft.

Lydon's physical profile is a bit of a mixed bag.  He has solid size for a power forward, standing just under 6'10 in shoes, and possesses an improved 223-pound frame that he clearly worked on coming into the 2016-2017 season, but has a less than impressive 7-foot wingspan and still has room to add strength.  A fluid athlete, Lydon isn't overwhelmingly shifty with the ball in his hands, but runs the floor well and is quick off two feet when he can build up a head of steam approaching the basket.

Lydon was asked to do a bit of everything for Syracuse offensively, helping to stretch the floor as jump shooter, make opportunistic plays around the rim, run the floor in transition, and also exploit mismatches in the post against smaller forwards.  Averaging a terrific 1.037 points per possession over 12.7 possessions per game as a sophomore, Lydon took a modest step forward from his freshman year and ranked as the second highest volume scorer on a balanced and efficient Syracuse team that did its best work from the perimeter.  However, Lydon's 14.9 points per-40 minutes pace adjusted ranks as the fifth lowest mark among college players in our top-100, as he didn't always assert himself as well some nights as others, never really emerging as the go-to guy Syracuse fans hoped he'd develop into.

For all of the things Lydon was asked to do, his potential at the next level starts with his terrific spot up jump shooting ability.  Knocking down 40% of his 245 attempts from beyond the arc in his two years with the Orange, Lydon is a dangerous set shooter with a high release point who has flashed impressive consistency well beyond the NCAA three-point line, and a knack for making the most of open opportunities from the perimeter in the half court.  His ability to space the floor at 6'9 is certainly his most intriguing attribute from an NBA perspective.

As well as Lydon shoots the ball off the catch, he's not nearly as effective off the dribble.  Shooting 7/24 on pull-up jumpers in the half court, Lydon's release loses a bit of its fluidity and his accuracy plummets when he's forced to put the ball on the floor at the moment.  He isn't particularly quick or elusive off the bounce, limiting his ability to create separation one-on-one and rendering him more of an off ball threat.

Though Lydon isn't very adept at creating offense away from the rim, to his credit, he does a very nice job relocating without the ball in his hands.   He shows a strong feel for the game moving without the ball and lifting to the perimeter with impressive timing when he sees his defender fall asleep.  The 20-year old is also solid passer who keeps his head up when he puts the ball on the floor, and doesn't force many shots, sometimes to a fault.

When Lydon did look to force the issue this season, it was frequently in the post where he has fairly rangy footwork and solid touch, but lacks a degree of strength and explosiveness in a crowd to consistently create high percentage looks.  Lydon's lack of explosiveness off one leg also limits him at times as a finisher.  Shooting a slightly above average 56% in finishing situations in the half court last season, Lydon can go up and get lobs and play well above rim when he crashes the boards with a head of steam, but isn't quite as capable when forced to play through contact, even actively avoiding it at times.

Defensively, Lydon has been fairly productive in Syracuse's zone, averaging 1.1 steals and 1.6 blocks per game over 71 games at the college level, and though he possesses terrific instincts and timing, he remains a bit of a mixed bag for the next level.  Lacking a degree of lateral quickness on the perimeter and physicality and length inside and on the boards, Lydon nonetheless proved to be a very solid team defender playing multiple spots on the back line of Syracuse's zone.  His defensive potential at the next level is a bit of a question mark as his inconsistent presence on the glass and lack of length to defend the power forward spot could certainly limit him in certain matchups.

With all that said, Lydon remains an intriguing prospect who still has some room to grow as an offensive weapon, even if he is a year older than most of the players in his class.  The proliferation of the 3-point shot in the NBA has created a niche for forwards like Lydon who can space the floor and will readily fill a role.  A potential mid to late first round pick, even with his limitations on both ends, the New Hampton School product could certainly be a nice developmental role-player for a team in the 20s who can mask his weaknesses and make use of the valuable floor spacing he figures to provide.
Read Next...