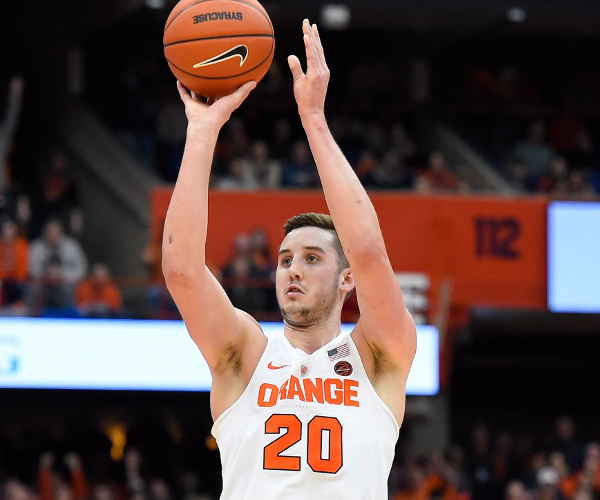 The 6'9 sophomore had arguably his best game at the college level, finishing with a very strong 29 points and 9 rebounds in 36 minutes, shooting 12-13 from the field and two of five from the free throw line.

He's been off to a slow start offensively in what was projected to be a breakout season after a very promising freshman campaign. With that said, he's still shooting 41% for 3 on the season, and made three 3-pointers in this particular contest, as he has terrific footwork and shooting mechanics for a player his size.

Lydon was a lot more aggressive in this game than he's been most of the season. His passive play has been frustrating at times to watch, so it was good to see him be more aggressive for a Syracuse team that lacks much in the way of ball-handling, perimeter shooting, and overall talent this season.

Lydon showed off his playmaking skills, post-game, off-ball movement, and all-around feel for the game. He needs to continue to improve his toughness defensively and on the glass.

Unfortunately Syracuse lost this home game at the Carrier Dome 78-71.

Jonathan Givony
@DraftExpress
Tyler Lydon is likely the best long-term prospect of the bunch. At 6'10, he brings a rare combination of fluid athleticism, 3-point shooting, and timing as a shot-blocker. He's a major sleeper NBA prospect for future drafts.
Read full article

Strengths
-Has a nice frame that should fill out in time. Big shoulders
-Good wingspan
-Solid athlete. Fluid and mobile
-Decent skill-level on the perimeter
-Very nice shooting stroke. Can make catch and shoot 3-pointers when left open
-Can create off the dribble a bit in straight line
-Rotates for blocks
-Crashes offensive glass. Competitive guy
-Intelligent player. Plays within himself

Weaknesses
-Still filling out physically. Lack of strength affects him in every facet of the game
-Cannot utilize his size inside the paint
-Struggles to finish around the basket
-Poor defensive rebounder
-Lacks a degree of toughness
-Little bit upright on perimeter defensively

Outlook Stretch four with a nice skill-level. Still raw in many facets of the game but shows a solid framework to improve as he gets stronger and matures. Was not particularly productive in this year's EYBL. May be better suited in more structured settings playing alongside other good players. Plays a coveted position in today's basketball. Looks likely to outplay his current recruiting ranking.
Read full article