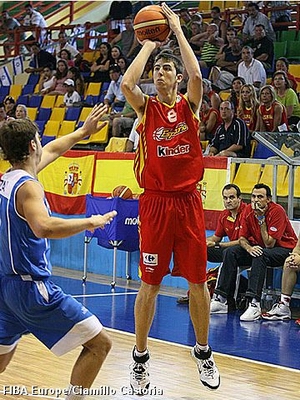 Luis Fernández
@DraftExpress
Alberto Jodar continued playing a complimentary role for Spain, filling the power forward spot, which limited his ability to showcase his perimeter skills, and focusing on defense, rebounding and hitting open shots. He showed his nice touch from the perimeter (42.9% in three pointers), but also his ability to put the ball on the floor with his right hand --although again exposed severe limitations with his left as well. However, he was a first year junior playing with kids older than him; next year he will have the chance to assume a bigger role and show what he can really do on the basketball court.
Read full article

Luis Fernández
@DraftExpress
Easily the most intriguing 1991 prospect seen in the tournament, Jodar hardly impressed anybody with his playing level in Mannheim, given the good reputation he enjoyed in advance, but anyway emerged as one of the most consistent foundations for Spain.

While Fuenlabrada is developing him at the small forward spot, the lack of size on the Spanish squad pushed him to inside positions full time. Not active at all putting the ball on the floor, perhaps given the team schemes up to a certain extent, we couldn't properly evaluate his ball-handling development, an extremely important area of the game for him if he wants to become a top perimeter prospect (we've been told he's making some strides in this department). Instead, he would usually settle for spot-up three-pointers from the corner with average consistency- or share the ball with his teammates showing nice decision making.

It was in other duties where he became a crucial piece in the Spanish puzzle. Defense, intimidation, rebounding, Jodar was a permanent presence to provide some consistency to a limited frontcourt thanks to his 6-9 body, long arms, nice athleticism, and good positioning. The guy is a very serious player, but needs to take a step ahead in order to become a go-to guy.
Read full article

Luis Fernández
@DraftExpress
The youngest kid in this review, Jodar is a forward who still has a very long way to go, but is already showing excellent potential. He's fresh off a great performance in the U-16 European Championship leading Spain to a silver medal and clinching a spot in the all-tournament team. And last summer, he was a very important part of the supporting cast that upped Ricky Rubio's Spain to win that very same continental championship. This season he has regularly played in Fuenlabrada's junior team.

The intrigue starts with his physical profile. He's a very long kid, not only standing 6-9 tall and still growing, but displaying a superb wingspan. In terms of his frame, Jodar is not particularly wide, actually more in the line of lengthy players, but still shows a nice body structure that will allow him to become strong enough to operate in the frontcourt. Nicely athletic, he logically has a ways to go in terms of explosiveness.

His go-to move is the spot-up jumper. Jodar is rather effective out to the three-point line (although he looked very erratic in the Circuit), displaying nice mechanics in the process, but he barely shows any off-the-dribble ability in this regard. Actually, he's still not much of a ball-handler. Fuenlabrada is putting emphasis on his perimeter abilities, trying to make him versatile enough to play small forward. Still, at this point his profile suits better with the power forward position. He shares his time both on the perimeter and in the low post (particularly against his peers), where he shows some decent moves and a limited ability with the jump-hook. Jodar can put the ball on the floor with both hands and attack his match-ups. Even if he nicely keeps control of the ball, he's too slow off the dribble, showing an average first step, although with nice strides. In the end, he is rarely able to completely beat his opponent, but he usually stays under control, and easily finds his teammates off-the-dribble. Indeed he's a pretty nice passer, reading well the game. Defensively he intimidates with his wingspan and cares about team defense, staying alert in the passing lines. On the other hand, he's still a bit slow in the lateral movement department. Showing nice hands, he's also a productive rebounder.

Although looking like an excellent player in the making, Jodar will have to seriously work on his off-the-dribble skills to really emerge as a top perimeter prospect.
Read full article