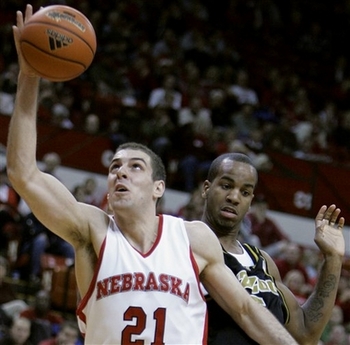 Jonathan Givony
@DraftExpress
After a ho-hum rookie season in the ACB, former Nebraska product Aleks Maric has absolutely exploded this season for Partizan Belgrade, averaging 18 points and 10 rebounds in the Euroleague and ranking amongst the top players in European basketball in virtually every statistical category. His below average athleticism and defensive potential limits his NBA upside to a certain extent, but considering his production, he will surely be getting extensive looks from teams this summer.
Read full article

Joey Whelan
@DraftExpress
Maric declared for the NBA draft after his sophomore season in 2006, but was talked into returning to Nebraska for the 2006-2007 season by his new head coach Doc Sadler, who came in from UTEP. It has been a tough season overall for the Huskers, who are in a rebuilding year, and finished 10th overall in the Big 12. Still, Maric took a step forward as a player, and emerged as one of the better post scorers in the conference. Despite his progress, many question marks surround him when it comes to his NBA potential.

Marics has a big body and strong frame, which he uses well in the post. He bends his knees well when fighting for position, and this gives him the leverage to get perfect position on the block each time. The bulk of his points come from within 10 feet of the basket. Maric uses a hook shot to score most of his points out of the post. He uses both hands well with this shot, and this can be very hard for defenders to block with the way he keeps them off with his body. In terms of footwork, Maric can spin in either direction, and handles the ball well enough to get all the way to the basket against most Big 12 defenders. His shooting has improved since last season as well, though it still could use some work.

At this point, certain improvements would go a long way for the Aussies NBA potential. Maric has good size for the center position, but has severe limitations athletically. He runs the court poorly, and lacks quickness on the low block, particularly with his footwork. Though he creates a lot of looks out of the post inside, Maric could still stand to improve his touch to finish some of these looks. Maric struggles to score from more than 10 feet away from the hoop, and tends to look down when he dribbles the ball. Because of this, he rarely passes the ball out of the post, and when he isnt in a position to score, often turns the ball over (3 turnovers per game on the season). Against teams like Texas A&M and Kansas this season, Maric has struggled when matched up with big men his size. Hes had some spectacular statistical performances as of late (41 points vs. Kansas State, 31 points, 19 rebounds vs. Missouri and 36 points, 12 rebounds against Iowa State), but these all came against teams that stood no chance at challenging his size due to their extremely weak frontcourts.

Defensively, Maric holds his position well, but struggles to contest shots because of his physical limitations. He has the tendency to get into foul trouble, but plays very well through the foul trouble late in the game.

NBA teams usually covet big men who can score in the low post, but physical limitations will hurt his upside in the eyes of the decision makers on the next level. As a junior this year, Maric is already 22 years old, and has burned his draft card. He would be best served by coming back for his senior season, and spending some time in the weight room improving his body. If he can improve his offensive versatility, Aleks Maric will give himself a much better chance at working his way up the draft board. If things dont work out for him, he always has a Croatian (and Australian) passport he can fall back on, which could land him a boatload of money overseas.
Read full article