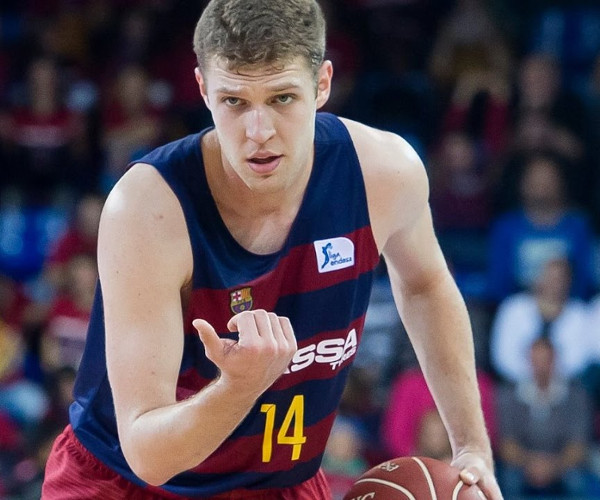 Aleksandar Vezenkov has accomplished quite a bit at the international level, despite being only 19 years old. The son of Sasho Vezenkov, a Bulgarian national team player, coach (in Cyprus and Bulgaria) and basketball executive, he's been a fixture on the various Bulgarian national teams for years now, scoring 17 points per game on average at the U16, U18 and U20 European Championships, as well as for the senior national team last summer.

A one-time Xavier commit, Vezenkov's father's ties to Aris Thessaloniki in Greece led him to sign there in 2010, where he enrolled in an American international school (Pinewood) that nearly led him on the NCAA track. He eventually decided to stay with Aris, and has been one of their most important players the past few seasons, averaging 14 minutes per game as a 17-year old, 28 minutes last year, and now 32 minutes this season, leading the Greek League in scoring for the fourth ranked team in the competition, an extremely impressive feat.

At 6-9, 225 pounds, Vezenkov has decent size for the power forward position he mostly plays, even if he lacks athleticism in a serious way. He's not particularly quick, nor explosive, relying on his tremendous scoring instincts, basketball IQ and competitiveness to find productivity, rather than on his physical tools.

Vezenkov is one of the best scorers in European basketball, regardless of age, averaging an impressive 21.5 points per-40 minutes pace adjusted. What's impressive is how efficiently he does it, with a 58% TS% (54% 2P%, 38% 3P%, 78% FT%) and a minuscule 9% turnover rate. Only 10 players in our database (which goes back around 15 years) have accomplished that feat (21.5 points per-40+, 58%+ TS%) in a major European league at that age, five of whom were NBA first round picks, and all had a significantly higher turnover rate.

Vezenkov scores in a wide variety of ways at the Greek league level, but the one that looks the most likely to translate is his perimeter shooting ability. He has deep range on his jumper, with consistent lefty mechanics that aren't the most conventional, but certainly work for him.

With time and space, he dips the ball significantly on the catch, but can also get his shot off more quickly when he needs to. This ability to make jumpers in different ways is an indication of his instincts as a shooter, and a very good sign for his future.

Vezenkov shot nearly five 3-pointers per game this season, and made 38% of his overall attempts. His jumpers come in a variety of situations, be it as a spot-up shooter, in pick and pop situations, coming off screens, or attacking closeouts for pull-ups. His size helps him get his shot off over smaller defenders, and he's very crafty about using his body to create space. When a defender runs too quickly at him, he has great timing attacking the closeout and dribbling into open areas. He is not fast or quick by any means, but he uses his instincts and smarts to overcome that at the Greek league level. 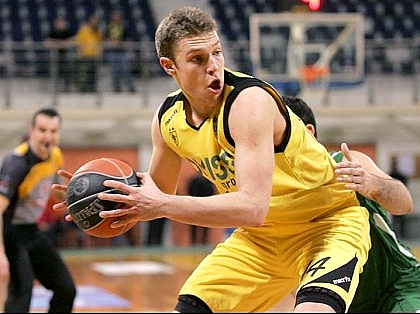 Only around a third of Vezenkov's points and field goal attempts this season came from 3-pointers, as he does a significant amount of damage inside the arc as well. Even though he can barely jump over a phone book, he finds ways to score using floaters, runners, pull-ups and other touch shots in the paint over potential shot-blockers. He has all the tricks in the book here, speeding up, slowing down, shooting off one leg, using the glass, etc.

Vezenkov was utilized frequently in post-up situations, as he's such a great scorer that getting him the ball in any real proximity to the basket is a great idea, as he can often just throw the ball in. He makes tough fade-away and turnaround jumpers on the regular, and knows how to use subtle fakes, spins and pivots to create space for his jumper with a high release point. Perhaps most impressive is the way he pounds on opposing defenders with his body to back his man down and create additional room to operate, something that you rarely see 19-year olds do in a pro league. He's got great footwork, body control and touch, but is also very physical for someone his age.

Like most great scorers, Vezenkov finds ways to get easy baskets, whether it's running the floor in transition, or moving off the ball in the half-court. He doesn't run that fast, but has great instincts for knowing the exact moment in which to leak out ahead of the defense and secure the pass-ahead for a layup. He's not explosive by any means finishing around the rim, but has phenomenal touch using the glass and an advanced understanding of angles.

The same can be said for his prowess as a cutter. He's very active off the ball and will punish defenders who overplay him as a shooter on the perimeter. He also has a nose for the offensive glass, pulling down a very solid 2.3 caroms per-40 minutes.

While Vezenkov is a bucket-getter through and through, he's also not a bad passer. He's averaged a career 2.5 assists per-40 minutes playing for Aris, and turned the ball over on a miniscule 9% of his possessions this past season (11% career). That bodes well for his role-playing potential at higher levels, and shows that even though he has a huge scoring role on his team, he's not selfish, and certainly has a good feel for the game.

A major question mark is how Vezenkov's scoring prowess will translate to higher levels of competition, as he's a below average athlete by NBA standards, playing almost entirely below the rim. The Greek league, while still strong with domestic players, and generally at the top, is not what it used to be due to financial problems in the country as a whole. This is especially noticeable among frontcourt players, where there simply aren't that many legit big men with length, athleticism and real talent, which has certainly benefited Vezenkov. His 2P% against teams over .500 this season is 51%, compared to 58% against sub-500 teams, while his 3P% differential is even more glaring, 33% against 44%. He also gets to the free throw line less and rebounds substantially worse (7.7 per-40/10.4).

There is little question that longer, more athletic defenders hamper him in a serious way, as he already struggles to create his own shot against athletes due to his underwhelming first step, and poor leaping ability. It remains to be seen if he'll still be able to score in as many different ways as he does in Greece against better competition, or if he'll be relegated to more of a spot-up role.

While Vezenkov will almost certainly find ways to score regardless of the level of competition he ends up in, the biggest issue he'll likely run into is on the defensive end. He is a serious tweener here, as he lacks the height, strength and length to guard most big men, but is far too slow to stay in front of smaller players on the perimeter. Vezenkov puts a solid effort in here, with good toughness and physicality, but he often looks overwhelmed. His defensive stance is poor, upright and hunched over, and he gets beat off the dribble frequently. He struggles in post-up situations due to his lack of length and explosiveness, and has only blocked 40 shots in the 3651 minutes of action we have recorded for him, or one every 91 minutes.

Veznekov is currently competing in the Greek League playoffs, and won't be done until June 15th at the earliest when the series for third place concludes. That will make it nearly impossible for him to garner much feedback from NBA teams in private settings, and may force him to withdraw from the draft unless he's able to get a promise somewhere in the late first or early second round. If he does withdraw, it's likely that he'll move to a higher level of competition next season, possibly the ACB according to rumors. Some NBA team may decide they've seen enough from him this year, though, and could try to lure him to stay with a guarantee. He is a polarizing figure among talent evaluators, but he certainly has his fans as it's impossible to find scorers in his mold at 6-9, and stretch power forwards like him do often find a way to make it despite their limitations.
Read full article