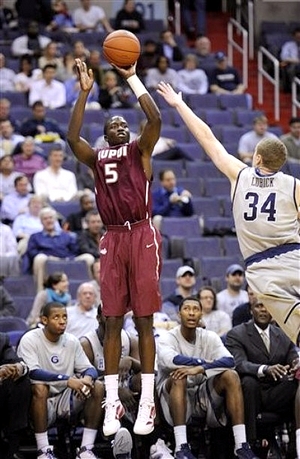 One of the top-10 scorers in college basketball, Alex Young's senior season and career at IUPUI came to a disappointing end this week after losing in the quarterfinals of the Summit league conference tournament.

Young increased his scoring productivity on both a per-game and per-minute basis this season, but did so on a high-volume, low-efficiency basis, ranking 3rd amongst collegiate prospects in field goal attempts per-minute pace adjusted, while shooting a career low 42% from the field. He was able to offset that somewhat by getting to the free throw line more often and turning the ball over much less frequently, but did so mostly in a losing cause on a team that went 14-18 on the season and finished seventh in the weak Summit League, with a 7-11 record.

Young is a very impressive player to take in on first glance, as he has terrific size for a wing player at 6-6 to go along with a NBA-ready frame. He's an instinctive scorer who can create his own shot at will and makes jumpers from all over the floor, sometimes in extremely impressive fashion.

A solid ball-handler in the open floor, Young is occasionally asked to initiate his team's offense from the perimeter, using his superior size, strong frame and aggressive nature to bully his way to the rim, drawing plenty of fouls in turn. Not particularly explosive around the rim, he struggles to finish everything he creates for himself, but is such a force driving down the lane at the Summit league level that he can often get himself to the free throw line instead. Young is talented enough to put the ball in the net from almost anywhere on the floor, albeit not in an efficient manner, as evidenced by his poor shooting percentages (47% from 2-point range).

Also a capable perimeter shooter, Young can get very hot at times and bury some very tough jumpers from well beyond the 3-point line. His shot-selection is exceptionally poor unfortunately, as he has a difficult time distinguishing between good and bad looks, as has a tendency to settle for deep, contested pull-up jumpers early in the shot clock, which makes it very difficult for him or his team to play efficient, winning basketball. Young attempted nearly five and a half 3-pointers per game this season, but converted just 34% of them, struggling in particular to make shots with his feet set.

Defensively, when dialed in, Young can make a major impact with his combination of size, strength and length at the Summit league level, as he moves his feet well and has good anticipation skills, getting a good amount of steals jumping in the passing lanes. Young's fundamentals and awareness can waver at times, though, and his team ranked as one of the worst defenses in the NCAA this season, giving up 110 points per 100 possessions according to Kenpom.com.

The type of player who could have some strong workouts thanks to his impressive physique and solid one on one scoring instincts, Young will have a chance to display his merits as a NBA-level scorer at the Portsmouth Invitational tournament in April.
Read full article 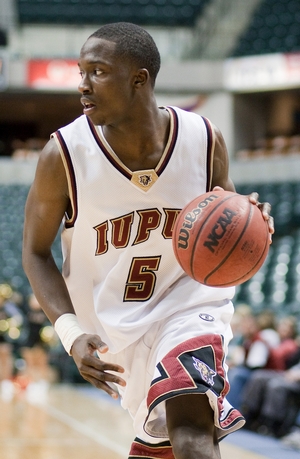 Steadily improving his production and playing an expanding role his first three seasons on campus, Alex Young has established himself as a very good scorer at the college level, and will look to capitalize on that as a senior.

Standing 6-6 with a well-built frame and good length, Alex Young is a good overall athlete with a knack for putting the ball in the basket, but still has room to develop his skills in a variety of areas.

On the offensive end, Young does most of his damage attacking the basket, mostly operating with the ball in his hands. His scoring attempts are about evenly split up between isolations, pick-and-rolls, and spot-up catch-and-drives, with him being comfortable in all three situations against the level of competition he faces.

As a ball-handler, the left-handed Young is very reliant on his dominant hand with both dribbling and finishing, often going left on drives to the basket, and usually finding a way to get back to his left hand on the occasions he goes right. Against the level of competition he faces, with his size and athletic abilities, this isn't very problematic, but obviously poses concerns projecting to higher levels. His ball-handling overall is not especially polished, as he doesn't utilize much in terms of advanced moves and his control is lacking at times, but he does a good job taking advantage of his physical tools and also utilizing subtle changes of direction to get around his man.

Young is definitely at his best on spot-up drives where he already has a half step on his man, showing solid instincts in this regard and doing a good job finding the quickest route to the basket, where he's a capable finisher and isn't afraid to draw contact. Young scores in a variety of ways at the rim, utilizing both lay-ups and an array of floaters and runners, but shows problems on the rare occasions his opponents have a formidable help-side defender in the lane, where Young can get very erratic with his finishing.

In isolations, Young isn't quite as comfortable, not always being able to take advantage of his physical tools, as despite his good first step, his average ball-handling skills don't always allow him to utilize it. Young's ability to pull up for jumpers off the dribble is also still a work in progress, as despite him relying on it often, he's very inefficient on these attempts, scoring 0.61 points per possession on pull-up shots according to Synergy.

As a spot-up jump shooter, Young shows potential and has excelled in prior seasons (39.6% three-point shooting on 5.1 attempts per game as a sophomore), but didn't really stand out in this area as a junior, shooting just 33.3% from three on 3.6 attempts per game. Young has solid form with a high and quick release along with flashes of deep range, but he can get sloppy at times and isn't consistent with keeping his legs under him. Really improving in this area would be very helpful to his stock, as spot-up three-point shooting is a highly coveted skill in the NBA among role-playing wings.

In terms of the rest of his offense, Young does a good job throwing his frame around to compete on put-backs around the rim and is also occasionally featured on cuts, two things that he'd likely be asked to do more of if he makes it in the NBA. It's tough to really get a feel for Young's ability on off-ball cuts given the role he plays, and that makes it somewhat difficult to project him to the next level, where he wouldn't be asked to play the go-to scorer role he plays for IUPUI.

On the defensive end, Young shows decent tools with his size and length, while also looking capable in terms of lateral quickness, but his commitment and fundamentals can be inconsistent. Young is prone to letting out of his stance early in isolations and not doing the best he can to contest shots both on the perimeter in the lane, not fully applying himself on this end like he does on offense. Really buckling down here should be a priority for Young this season, and will likely be very important for his stock.

Looking forward, Young appears to be an ideal candidate for the Portsmouth Invitational Tournament in April, and should get his share of due diligence looks from NBA teams throughout the year. Improving his perimeter shooting, ability to finish against help defense in the lane, and his overall defensive abilities and commitment would all be very helpful to his stock, as would a strong season for his team. The Jaguars have early season matchups against Georgetown and Louisville, and Young shouldn't miss out on those opportunities to catch the attention of scouts.
Read full article