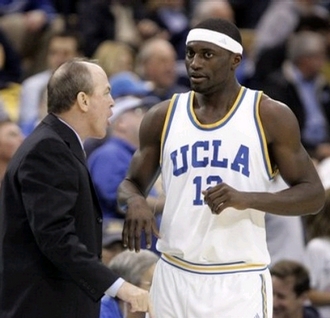 Jonathan Givony
@DraftExpress
Deserving of a quick mention for the improvement hes shown over the past few months, Alfred Aboya has been playing terrific basketball for UCLA as of late, and if anything is working himself into making some decent cash in Europe if things dont work out with the NBA. Aboya has gone from being a complete non-factor offensively to showing some surprising sparks of scoring ability from time to time, improving his FG% and FT% substantially, while cutting down on his once sky-high personal foul and turnover rates.

Still a fairly limited player offensively, Aboya has proven to be a solid finisher around the basket and a surprisingly decent mid-range jump-shooter. He runs the floor well, is fairly athletic, and gets to the free throw line at a decent rate. He cannot put the ball on the floor or create his own shot with his back to the basket, but seems to understand that.

Defensively, Aboya isnt much of a shot-blocker, but hes pretty active and does a good job hedging screens. He is a very average rebounder, though, which basically nullifies any chance he might have of making the NBA considering his likely role, along with his average size (6-8) and the fact that hes already 24 years old. We thought many of the same things about his teammate Luc Richard Mbah a Moute, though, and that hasnt seemed to hurt him at all in the NBA.
Read full article