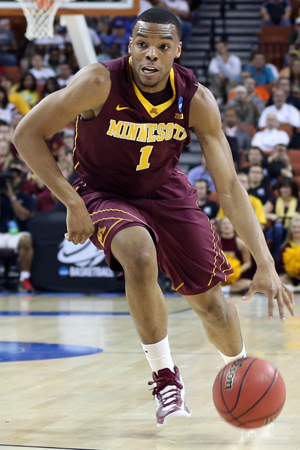 After coming on strong down the stretch during his freshman season in 2012, Andre Hollins emerged as the leading scorer and distributor in Minnesota's methodical offense as a sophomore, putting himself on the NBA radar in the process. Losing Trevor Mbakwe and Rodney Williams to graduation, new Golden Gophers' Head Coach Richard Pitino will rely on the junior guard to help overcome the team's frontcourt losses with his prolific scoring ability in the program's new up-tempo system.

A consensus top-100 recruit coming out of White Station HS (TN), if there's one thing the 6'1 combo guard has built a reputation for, its scoring. Putting up 41 points against his hometown Memphis Tigers in mid-November and ending the season with two 25+ point outings in the NCAA Tournament, Hollins showed the ability to get hot and stay hot from the perimeter at times last season while serving as the team's primary ball-handler for stretches as well.

A solid athlete with good strength for his position, what makes Hollins so dangerous is his perimeter jump shot. With nearly 84% of his shots in the half court coming from the perimeter and more than half of his field goal attempts coming from beyond the arc overall, his ability to make shots was an game changer for Minnesota last season. Shooting the ball with a very quick trigger and unwavering confidence, Hollins made an impressive 37% of his jump shots off the dribble and off the catch alike last year according to Synergy Sports Technology. On his best nights, he's a threat to pull-up on a dime from the outside, hit shots from NBA range, stay dialed in with a hand in his face running off of screens, and is the player you want going to the line in crunch time.

Though Hollins is adept at scoring from the perimeter, his lack of elite elusiveness off the dribble and size limits him around the rim, as he finished at a 41%-clip at the basket last season. Hollins has a knack for creating space for his jump shot thanks to terrific footwork and the speed of his release, but doesn't have that extra gear that would allow him to create high-percentage shots for himself regularly in the half court.

His decision-making also leaves something to be desired as well, as he tends to dribble himself into trouble at times and is still getting used to dialing back his instincts as a scorer in pressure situations as he continues to make the transition to the point guard position. If Hollins is going to take the next step as a prospect, he'll need to learn to pick and choose his spots and do a better job creating shots for his teammates to make himself a more viable point guard for the pro level.

Defensively, Hollins plays with decent energy, but was prone to lapses last season. He didn't always fight aggressively to get over ball screens last seasonsomething that will need to change if he wants to maximize his abilities on this end on the floor. He has solid lateral quickness, and can apply ball-pressure on the perimeter in spurts against slower players, but struggles to stay in front of more aggressive scoring point guards at times. Considering the limitations his size put on his versatility at this end of the floor, scouts will have an eye on his ability to hold his own against primary ball-handlers in the coming seasons.

Moving forward, it is entirely likely that Hollins will emerge as one of the more prolific scoring combo guards in the Big Ten, if not the country over the coming seasons. His jump shot has obvious value at the NBA level, but his lack of size means it will be his ability to become a more capable floor general and defensive player that will likely be determining factors on where his stock stands when he becomes eligible for the draft.
Read full article