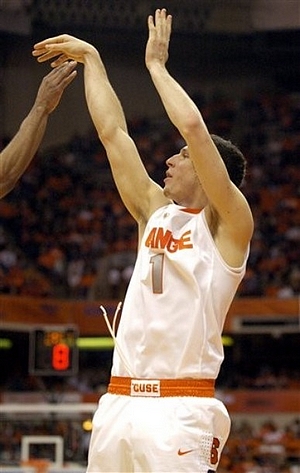 Steadily improving in each of his four seasons at Syracuse, Andy Rautins is now a key contributor on one of the best teams in the nation, leading Syracuse in assists and three-point shooting.

From a physical standpoint, Rautins is underwhelming for an NBA shooting guard, and doesnt have any notable strength, length, or athleticism to make up for his average size. He has strongly defined strengths and weaknesses as a player, and he plays a style very well suited for his lack of physical prowess.

On the offensive end, Rautins game completely revolves around his three-point shot, which he hits with very high accuracy (41%) and is capable of doing in a variety of ways. 81% of his field goal attempts come from beyond the arc, a number that has remained consistent throughout his career at Syracuse. His shot has outstanding mechanics, including a quick and high release point, excellent elevation, and a consistent shooting motion. He does an excellent job squaring his shoulders and maintaining body control when shooting on the move, either catching and shooting or pulling up off the dribble. This also makes him an excellent shooter in transition, where he can stop on a dime and still maintain good form.

In space, Rautins is outstanding, especially when he has time to jump into his shot. Coming off screens and/or shooting with a hand in his face, Rautins is still good, though definitely not on the same level as he is in space, and there are question marks about how these areas of his game will project to the next level, where hed be facing bigger, longer, and quicker opponents on a nightly basis. On the plus side, Rautins does an excellent job using pump fakes and quick power dribbles to create separation, being able to pull up and square his body whenever he gets the smallest glimpse of daylight. This luxury can also cause problems for him, however, as hes prone to pulling up for high difficult shots early in the shot clock, either with a hand in his face, from well beyond NBA range, or both.

Aside from his jump shot, Rautins does most of his offensive damage by making strong passes in the flow of the offense, getting the vast majority of his assists through pass penetration, staying on the perimeter and finding cutters in the lane. Hes capable of coming off screens and going into the lane for a drive-and-dish when he already has a step on his man, but is not the type of player thats going to break a guy down in isolation and draw in the defense.

In terms of attacking the basket, there really isnt much to say, as Rautins rarely does so. 208 of Rautins 256 field goal attempts this season have come from beyond the three-point arc, and according to Synergy Sports Technology, hes had only 15 shots around the basket in the halfcourt this season. Even on the rare occasions he does get to the rim, he relies mostly on an inaccurate floater, doesnt show much ability to elevate around the rim, and struggles heavily finishing, whether dealing with a weakside defender or not. Hes a very turnover prone player relative to his usage rate, coughing up the ball on 25% of his possessions, which is an exceptionally high rate.

While Rautins does show good court vision and passing ability, its hard to project him as a point guard at the next level due to his limited ball-handling and shot creation abilities, which is complicated further by his lack of overall quickness and athleticism. Hes certainly capable of bringing the ball up the floor, handling on the perimeter, and using craftiness to make one or two dribbles and get himself an open jumper, but he hasnt really shown any repertoire of advanced moves beyond that, nor has he shown the ability to penetrate and create for others from isolations.

Defensively, Rautins is extremely active and focused in Syracuses zone, where he shows an excellent perimeter stance, keeps his hands up, and runs all over the floor to contest shots and crash passing lanes. That said, while it isnt a big deal in the zone, his lateral quickness projects to be below average at both the point guard and shooting guard positions in the NBA, while he doesnt have great strength for the shooting guard position either. Its very easy to see NBA teams isolating him out on the perimeter and going to work, as he just doesnt appear to have the physical tools to stay in front of the athletes hell be matched up against on a nightly basis.

Looking forward, Rautins has one clear NBA skill in terms of his three-point shooting, but its tough to say whether that alone will find him a place in the league. Hell have opportunities at Portsmouth and in Summer League to prove his worth, and teams could be attracted to his three-point shooting, basketball IQ, work ethic, and the learning curve hes shown at Syracuse. Still, given his physical tools and lack of NBA position, it will certainly be an uphill battle for the 23-year old to find a place in todays NBA.
Read full article