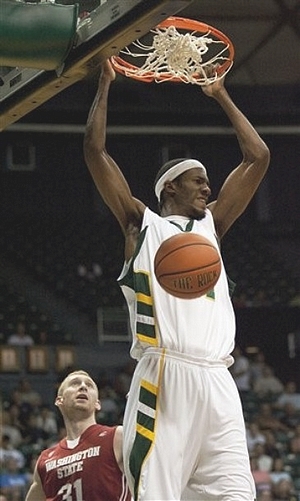 Steadily improving his game throughout his first three years in college, Anthony Jones has developed into a serviceable role player for Baylor, and with his ample size and length for his position, is bound to start getting more attention from NBA scouts as a senior. While Jones brings some intriguing abilities to the table from an NBA perspective, he's still very raw and is a very unorthodox prospect.

Standing 6'10 with great length and just decent athleticism, Jones weighs in at an unbelievable 190 pounds, which is almost unheard of for a player his height and age. Jones by no means has a great frame, particularly in the lower body, but can certainly put on more bulk, which actually would likely help more than hurt his athletic abilities. Jones doesn't stand out in either his quickness or explosiveness, being mobile but not especially fluid, and showing nothing in terms of ability to finish with power around the basket.

Where Jones does most of his damage at this stage is with his jump shot, as 40% of his field goal attempts come from behind the arc, where he's hitting a very solid 39.4% (and an equally impressive 81.8% at the free-throw line). Jones plays much more like a small forward than a power forward, with almost all of his possessions coming on spot-up jumpers and pull-up jumpers in space.

Looking at Jones' shot, he doesn't have textbook mechanics, shooting from a bit of a staggered stance and having a noticeable hitch in his shot, but he's very consistent with his motions and has both a high and quick release, especially for a small forward. Jones does a good job getting open and being ready to quickly catch and shoot, being reliable spotting up and occasionally coming around screens in space. On pull-ups, Jones doesn't show much ability to separate from his defender and does much of his damage in open space, but his excellent length allows him to shoot over the opposition when he is closely contested.

Jones also shows a bit in terms of attacking the basket, having a somewhat controlled dribble on straight-line drives to the rim, where he surprisingly goes right more than left despite being left-handed. He has a capable floater in his arsenal and can finish decently around the basket with either hand, but clearly shows trouble when matched with weak-side help, as he doesn't show the ability to finish through contact or power up around the basket, evidenced by how little he gets to the free-throw line at 2.9 attempts per-40.

Jones is also extremely limited in terms of his ability to create his own shot, as of the 233 possessions Synergy logged for him this past season, just 19 were of the post-up or isolation variety, with everything else coming operating off the ball.

Jones also does a solid job pursuing offensive rebounds for a small forward, using his size and length well, where his touch allows him to finish at a high rate despite his lack of reactiveness and power. While his rebounding comes off as a positive for a small forward, he's well below average rebounding on both ends if you're evaluating him as a power forward, averaging just 7.1 rebounds per 40 minutes this past season.

On the defensive end, Jones shows a good motor and ability to use his length to contest perimeter shots, but he shows severe problems moving laterally to defend isolations, suffering from a very high center of gravity and less than fluid movements. He's frequently beat by his man and could project as a liability defending 3's in man to man isolation situations in the pros. It's also worth noting despite his excellent size and length, Jones averaged a very underwhelming 0.6 steals and 0.4 blocks per game in 29.8 minutes, being mostly a non-factor off the ball as well.

Looking forward, Jones' excellent size and length combined with his sweet shooting touch from three will make him an intriguing workout candidate for NBA teams to evaluate in the pre-draft process, but his rawness and liabilities in other areas will be difficult to overcome without significant physical improvements. Maximizing his strength and athleticism will be critical for his success, as doing so will allow him to improve defensively, on the glass, and with his ability to finish in the paint. It will be interesting to see how he develops in his senior year.
Read full article