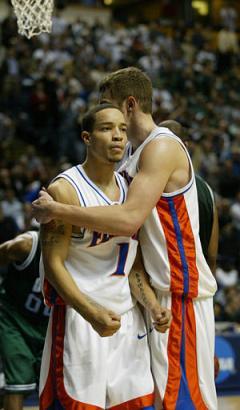 Mike Schmidt
@DraftExpress
This was a typical Summer League game for Roberson. When he gets hot, he dominates the game on the offensive end, taking the bulk of his teams shots and not setting up his teammates. While his ability to put points on the board is incredibly impressive, it doesnt change the fact that hes been the same player for years. He showed the same quickness to the rim and lethal range that he always seems to. Unfortunately, he also showed the lack of development in his point guard skills and little dedication defensively. Roberson seems intent on playing in the NBA, and while it is possible he could find a home if he continues to shoot the three well, he could be a star in Europe.
Read full article

Strengths
Has all the physical attributes you could ask for out of an NBA point guard; extremely quick, good leaper and possesses a fantastic first step. One of the best and most potent shooters in the NCAA, can shoot the ball from anywhere on the court with unlimited range, and can get his shot off from any position; off the dribble, stationary, moving left or right, falling out of bounds, from half court, he always finds a way to square his shoulders and he makes it look easy. His mechanics are as solid as they come, jumps high in the air and has a lighting quick release. Has a good mid-range game too, but doesn't use it enough. Excellent at creating separation from his defender and elevating for a soft jump shot.

He's a good ball handler. Has a lethal cross-over. Can take his man off the dribble fearlessly and get to the hoop in the blink of an eye, and will almost always finish strong. Thrives in transition, loves to push the ball and will usually find the open man. Has shown that he has decent court vision when he wants to.

Oozing with confidence, not afraid to take a big shot or any kind of shot for that matter, thrives when the game is on the line. Hits big shots when his team needs them most. Has made many game winning shots in his basketball career so far. Plays the game with a passion, will fire up his teammates and get the crowd involved. Tough as nails, never backs down from a challenge.

Weaknesses
More of a combo guard then a traditional floor general PG. Has trouble controlling the tempo, doesn't do a very good job of moving the ball around and struggles to execute set plays in a half-court offense. Decision making and shot selection needs to improve, often takes shots way too early in the possession. Does not think twice before pulling the trigger, for better and for worse. Doesn't have much of an idea about making post entry passes. Settles for the outside shot too much, Roberson has a great first step and a nice mid-range game, but he doesn't use it often enough.

Not a good defender at all. Lacks intensity on this side of the floor and gets burned time after time on the perimeter. Needs to play on a team with good defensive bigmen because they will be rotating often with Roberson on the floor. It's not really a lack of physical ability, far from that, Roberson is just more interested in being an offensive threat at this point, and playing for Florida doesn't help mask that at all.

Competition
Anthony Roberson has been playing a big role for Florida ever since he arrived in Gainesville. He was always the first man off the bench last season, even though he clearly outplayed Florida's starting Shooting Guard, Brett Nelson. Roberson is Florida's top scorer this year, at just over 17 points a game. His best outing of the year so far was against in-state rivals Florida State. Peep lit them up with seven threes and 28 points overall.

Outlook
Roberson needs a year of handling the point full time under his belt, and he will get that next year now that Christian Drejer has left Florida for Barcelona. If Roberson can show some decent point guard skills and especially an ability to consistently run an offense next year, look for him to throw his name into the mix and leave it there if he is projected as a first round draft pick. If not... well, he has one more year.

Facts
A McDonald's All-American in 2002. SEC Freshman of the year. Played both football and basketball in High School, was the starting Quarterback his sophomore year and then moved to Wide Receiver until he graduated. Nickname is
Read full article