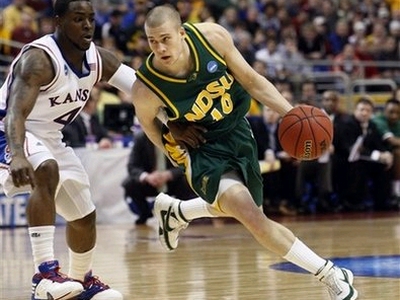 Joseph Treutlein
@DraftExpress
Ben Woodside again had a so-so performance, scoring 11 points but dishing out just 1 assist compared with 2 turnovers. He is showing that same excellent speed and change of pace ability that gave Kansas such fits in the NCAA tournament, but is really struggling with the size, length and athleticism of oncoming defenders once he turns the corner and needs to decide whats next. Hes not really doing a great job reading defenses, and is showing questionable decision making skills with the ball in his hands. His jumper looks excellent on the other hand, both from standstill positions and off the dribble, but hes really struggling on the defensive end, being overpowered by his matchup and having a very difficult time staying in front of anyone. This is not the kind of tournament he needed to have in order to prove that hes an NBA caliber point guard, but he still has one more game to try and make up some ground.
Read full article

Blogging through the Conference Tournaments

Jonathan Givony
@DraftExpress
With the game tied and just a couple of seconds left on the clock in the Summit league conference final, it was only fitting to see North Dakota State senior point guard Ben Woodside rise up for a difficult pull-up jumper after crossing over to his lefta shot he swished to send his team to the NCAA tournament in their first year of eligibility after coming up from Division II just five years ago.

Woodside is a guy weve watched from a far with a lot of curiosity this seasonnot only is he the first player to score 60 points in a game since Eddie House did so in 2000 (just two days after we wrote his initial scouting report in fact), he also ranks in the top-10 in the nation in both scoring (23 points per game) and assists (6.3).

Woodside has already accepted his invite to the Portsmouth Invitational Tournament and will be one of the most closely scrutinized players there, so well wait until then for a full scouting report. In the meantime we can say that hes a very quick but undersized pure point guard who can shoot the ball with his feet set or off the dribble, but is equally effective finding teammates. He gets to the free throw line at a nice rate and is very crafty in the lane, showing a great feel for the game and a real winners mentality. The biggest concerns about him likely lie in his slight frame, below average height and the fact that he projects as a weak defender at the next level. Still, he shows great intangibles and obviously would be considered one of the best point guards in college basketball if he were playing in a BCS conference. North Dakota State looks like quite a dangerous team if they get the right matchup in their bracket, so take a close look at who they are slated to face on selection Sunday.
Read full article

Kyle Nelson
@KNelsonDX
A relative unknown in the college basketball world, Ben Woodside is continuing to show what the fans of North Dakota have been witnessing for the past three years. The reason for his anonymity is because its only the Bisons second year in Division I competition as new members of the Summit League. The Bison ended last season with an impressive thrashing of eventual champion Oral Roberts, but because of NCAA transitioning restrictions, NDSU had to forfeit any postseason aspirations. The restrictions are lifted and the Bison are now a team that could be wearing that proverbial slipper come March.

The leader of the bunch is point guard Ben Woodside, who has career averages of 18.2 PPG and 5.1 APG and is a career 40% 3 point shooter on five attempts a game. No longer a sleeper, Woodside is now on scouts radars and with another big season he could be a prospect for Portsmouth and the NBA draft workout circuit. Two causes for concern right off the bat for Woodside however, are his sizeat just 5-11, and his age, as he will be only days away from his 24th birthday by next Junes draft.

Woodside is a scoring point guard (24.5 points per-40 pace adjusted) who can really shoot the ball. He has an effortless stroke with very little wasted motion and range that extends well beyond the NBA 3 point line. He has the ability to create a shot for himself off the dribble, especially coming off pick and rolls, where he is extremely adept. He comes off pick and rolls very tight, forcing a switch or a delayed hedge which he is very good at exploiting. Despite being less than 6 feet, Woodside has no problem getting his shot off. He has a very quick release and does a good job with his handle to create space.

Woodside is very quick for a mid-major college point guard, but he doesnt display freakish athleticism by NBA standards. He gets to the basket on a regular basis and the reason for that is two-fold. Firstly, as mentioned previously, his shot is deadly. As a constant threat from behind the arc, opposing guards play him tight and are told to run him off the 3 point line. Hes very good at using jab steps and head fakes, which get defenders leaning, giving him a step otherwise unachievable.

The second reason is his craftiness and deceptiveness. He changes speeds very well, makes great use of ball screens and can lull an opponent to sleep with his dribble before he accelerates to the basket. He splits screens regularly, which often leads to a short shot or tear drop in the lane. This incredible knack for getting to the basket is evidenced by his high free throw rate, as hes getting there 6.5 times a game for his career  an impressive stat considering his size.

On the downside, Woodside has a tendency to over dribble and force the action. When getting cut off from a drive, hell be persistent to a fault - either trying to drive amongst a crowded defense to make a play thats not there, or force up a tough shot. He doesnt protect the ball well either on his drives as he susceptible to being stripped. He also favors his right hand considerably, and coughs the ball up on 1/5th of his possessions.

Hes currently averaging 7.2 APG (6th in the country), which suggests hes a terrific passer, but the jury is still out on that. His high turnover rate thus far (3.7 a game) gives him a solid but not spectacular 1.9 A/TO ratio. He makes simple passes to open shooters or bounce passes on a two on one break, but none really eye opening. He goes for homerun passes in the paint which can either lead to a great assist or a costly turnover. When he decides to penetrate he often makes up his mind to shoot the ball instead of staying cognizant of open teammates. He has a propensity to leave his feet to make a pass which is always a dangerous decision.

On the defensive end, Woodside plays in spurts. At times he looks very good and prevents drives to the hoop, and other times he gets blown by. Overall, hes a much better on the ball defender than he is off of it. His decent lateral quickness, high I.Q., and strong upper body all contribute to his ability to compete at this end against more talented guards.

Off the ball however, he often has lapses in concentration as hell come out of his stance, be a second late on a rotation or casually swipe at an off guard driving past his side. He can get lazy on the ball as well as demonstrated by his habit of letting his man go past him with hopes of poking the ball out from behind. His lack of size will always be considered a hindrance regardless, as just doesnt have the length to contest most shots or deny passes on the perimeter, and will be susceptible to post-ups from bigger guards.

Woodside will need to prove that he can be a pure point guard at the next level by cutting his turnovers down and improving his decision making abilities. His shot will serve him very well and ensure that he plays somewhere professionally next season. Its going to be interesting to follow the Bison through this season and a lot will depend on how far Woodside can carry them.
Read full article