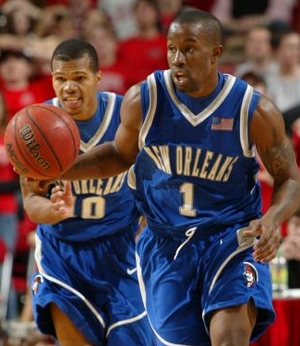 Jonathan Givony
@DraftExpress
Many eyebrows were raised when Partizan decided to peg an unknown American point guard out of the Turkish league to run their rebuilding team in the Euroleague. So far the results have been mixed, but there is a lot to be encouraged by from what the former New Orleans product has shown. A super quick but undersized combo with a scorers mentality, McCalebb gets to the rack like a pro but is still improving his perimeter shooting and decision making skills. Hes having a nice year at the highest level of European basketball, and is only 24 years old, so hes definitely a name to keep in mind for the future.
Read full article

Joseph Treutlein
@DraftExpress
The all-time leading scorer in Sun-Belt conference history, 5th year-senior Bo McCalebb is one of the toughest and most athletic players youll find in the NCAA.

A tiny guard in terms of height (6-feet might be a reach), but built like a pile of bricks, McCalebb is a scorer first and foremost, who plays mostly off the ball. Hes an explosive guard, with an outstanding first step and terrific quickness in the open floor. Despite his diminutive size, he has no problem finishing strong at the rim, often with a powerful two-handed dunk. Hes a very high energy player with a terrific activity level, as his near-seven rebounds per game as a junior would indicate.

McCalebb is a versatile scorer, ranked 7th in that category amongst NCAA players in our database, whos bread and butter comes from taking the ball strong to the hoop. He also ranks amongst the top-50 players in free throw attempts per-40 minutes, a testament to his ball-handling skills and ability to take contact at the rim. McCalebb can go either left or right, and has some very nifty spin-moves in his arsenal, as well as excellent body control. He moves off the ball extremely well, and is regularly run off screens and back-door cuts to shake the intense amount of attention he receives from opposing defenses. He has a nice mid-range game as well, able to create separation from defenders with his pull-up dribble, although with ugly shooting mechanics.

Never known for his perimeter shooting skills up until this year, McCalebb has improved his percentages to an excellent 43% from behind the arc on the season, albeit on a very limited number of attempts. He has a very inconsistent release point on his jumper, bringing the ball behind his head at times, flailing his elbow around in others, and often shooting the ball on the way down. He can hit a spot-up jumper with his feet set fairly well, but being able to expand his range out to the NBA 3-point line is not a given.

At his size, NBA scouts will surely want to see some point guard skills from McCalebb, and this is where he seems to fall short as a prospect. His playmaking instincts seem pretty lacking when it comes to running a half-court set, and most of his assists come off simple drive and dish plays. Hes not a selfish player, but does have a tendency to run into brick walls and make questionable decisions, as his first inclination is to create offense for himself, and if that doesnt work out, then only look to create for others.

Defensively, it will be hard for most NBA decision makers to get past his size, even if he makes a pretty good case for himself with the tenacity he brings to the floor, and the pressure hes able to put on the ball. Hes currently tied for 9th in steals amongst all players in our database, per-40 minutes. His lateral quickness is excellent, and this combined with his strength allows him to be a real force when he puts his mind to it.

All in all, McCalebb is an excellent college player who will get his fair share of looks, starting at Portsmouth most likely, and continuing with private workouts. His game looks better suited for Europe at the moment, but hell have an opportunity to prove otherwise.
Read full article