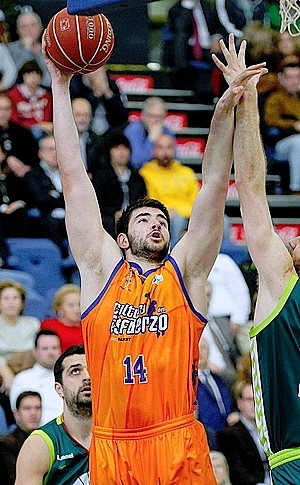 Just By the Numbers: the 2013 Center Crop

Kyle Nelson
@KNelsonDX
While Muscala may still qualify as an under-the-radar prospect among casual draft fans, few outside of the scouting community and fans of the Spanish ACB are likely to have heard the name of Montenegrin center Bojan Dubljevic. Dubljevic enjoyed an incredibly productive first season in Valencia, where the thrived as a stretch-five, with a fundamentally sound post repertoire to match. Without elite size (6'10) and athleticism (27.5 maximum vertical), scouts are unsure of whether Dubljevic can be as productive at the next level, but what is clear is that he is the second most productive scoring center in this draft, while competing in one of the world's best basketball leagues. Expect Dubljevic to hear his named called somewhere in the second round, despite the fact that he's likely two years away from joining a NBA team.
Read full article

Bojan Dubljevic has put up impressive numbers at virtually every level he's played at throughout his career. This year is no exception, as he's continued to produce at a high level despite making a significant jump in level of competition from the Adriatic league to the Spanish ACB, considered the top domestic competition in Europe. Still, recognition as one of the best European prospects in his age group has been slow to arrive, even though he's certainly produced like one.

When Valencia decided to sign Dubljevic to a three year contract last June, most viewed it as a long-term move for the rich and prestigious club that finished amongst the top four teams in Spain in each of the past three seasons. Dubljevic obviously had other ideas.

Injuries to two key players in Valencia's frontcourt rotationscenters Vitor Faverani and Sergei Lishoukpushed Dubljevic into a starting role, and he's responded by emerging as the fourth best per-minute scorer in the ACB. He's doing it in an extremely efficient manner at that, converting 52% from both 2-point and 3-point range through 14 games. It's a similar story in the EuroCup as well, where his team advanced with relative ease to the Top-16 stage behind a 5-1 record.

Much of the reason for Dubljevic's relative anonymity up until now has been his somewhat underwhelming physical profile. Measured at 6-8 ½ without shoes at the 2012 adidas EuroCamp, with a solid 7-1 wingspan and 242 pound frame, Dubljevic is not a particularly impressive athlete. He runs the floor somewhat awkwardly and is very much a below the rim player, struggling to dunk the ball unless he gets a running start. Most of his best minutes thus far in his career have come playing an unconventional Mehmet Okur style stretch-5 role, which may not always be possible against top-level competition at his size.

Dubljevic is a very good outside shooter, being extremely reliable with his feet set (19/42 3P, 45%) this season. This in turn forces opposing big men out of the paint and spaces the floor nicely for his teammates, one of the reasons Valencia's offense didn't miss a beat despite their injury problems. He doesn't possess an incredibly quick release, but shows impeccable discipline with his shot-selection, as he hasn't taken a single off the dribble 3-pointer all season according to Synergy Sports Technology. He's also hit 88% of his free throws this year.

With that said, Dubljevic is not a stereotypical European jump-shooter, as less than ¼ of his offensive production has come from beyond the arc this season.

Dubljevic gets a fair share of touches with his back to the basket, where he works relentlessly to establish good post-position. While not displaying an incredibly versatile repertoire, he is extremely smart, competitive and fundamentally sound, showing very good touch around the basket, and being capable of scoring off simple jump-hooks with either hand. Considering his physical limitations, it's fair to question how this part of his game might translate to the NBA. While he's had some success backing down weaker opponents this season, he's also been somewhat turnover prone at times as well, ranking third in this category overall in the ACB. He isn't much of a passer either, dishing out just 13 assists (versus 44 turnovers) in slightly under 400 minutes this season and 22 assists versus 79 turnovers in nearly 1200 minutes last year.

Dubljevic sets big, wide (sometimes illegal) screens on the pick and roll and dives to the rim at a full sprint every time, being a pretty reliable target for his guards to throw the ball to. He's mostly a below the rim finisher, but shows very good timing and touch off the glass, and is able to use both hands effectively around the basket. His effort level is impressive, as he runs the court as hard as he can at all times and isn't afraid to dive on the floor for loose balls. Generally speaking, everything Dubljevic does is at maximum intensity, as he's the type of player who seems intent on giving 100% every time he steps on the floor. 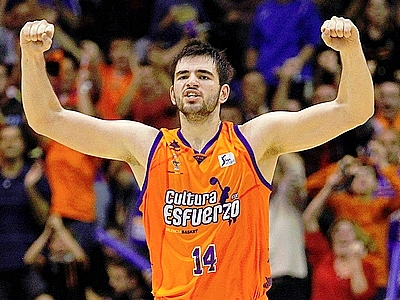 Defensively is where scouts might have the most question marks about Dubljevic's transition from European basketball to the NBA. While he clearly shows excellent toughness, competiveness, anticipation skills and smarts, his physical limitations are glaring on this end of the floor. Dubljevic possesses very poor lateral quickness, making it difficult for him stay in front of virtually anyone when switched out onto the perimeter, and putting his ability to guard NBA power forwards reliably in serious doubt.

While not as pronounced due to his resilience, he also struggles in post-up situations, being too small to guard many of the centers he's matched up with and getting beat off the dribble by quicker big men who like to face-up and go around him as well. In pick and roll situations he's often too slow footed to hedge and recover properly, not being able to cover ground quickly enough to contest opponents' jump-shots. With just 32 blocks in the approximately 1600 minutes (or one every 50 minutes of action) he's played the past two seasons in the Adriatic League, ACB, and EuroCup, he doesn't offer much in the ways of rim protection either.

Dubljevic is not a great defensive rebounder, pulling down just 3.7 defensive boards per-40 minutes pace adjusted this season, which is an extremely poor rate. His average leaping ability doesn't help much in this area, even if his length, anticipation skills and competitiveness allow him to do a solid job on the offensive glass.

With all that said, there is definitely a shortage these days of smart, skilled, competitive big men in Dubljevic's mold, something that he can undoubtedly take advantage of. His productivity at the highest levels of competition outside the NBA cannot be ignored, certainly when considering the fact that he just turned 21 years old two months ago. If he can learn some of the tricks of the trade and find a way to maximize himself on the defensive end, similar to the way players like Matt Bonner and Jorge Garbajosa did, it's not out of the question that he'll be able to find a spot for himself in the NBA. There are plenty of half-court oriented coaches who could appreciate all the things he brings to the table, and would be willing to work on his shortcomings.

Automatically eligible this June as a 1991-born international, Dubljevic is not even considered a prospect at this stage by any other draft service at this stage, which is surprising considering his productivity. Teams looking to use their second round pick on a player they can stash for a few years and watch develop in Europe will likely give him a strong look this spring, especially if he can continue to produce as efficiently at the power forward position (once his injured teammate centers return) as the season moves on.
Read full article