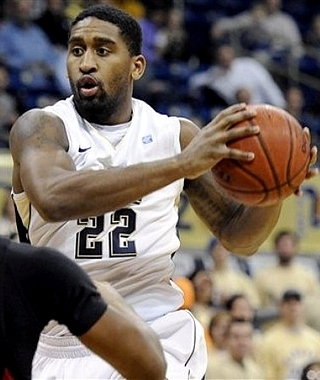 After steadily improving his production all four of his seasons in college, Brad Wanamaker has established himself as a key cog in Pittsburgh's offensive attack, while developing his passing game to the point where he now ranks fourth in our database in assists per-40 minutes pace adjusted.

A 6'4 guard with a strong frame and not much in terms of quickness or explosiveness, Wanamaker gets the job done with a game focused on skills that don't require much athleticism.

In spite of his gaudy assist numbers, Wanamaker is still very much a combo guard as opposed to a true point guard, spending a good chunk of his time playing off the ball in Pittsburgh's highly unselfish system. The vast majority of Wanamaker's assists come off passes from a static position, usually hitting open shooters but also cutters on occasion as well. The fact that he gets as many assists as he does is a testament to his superb court vision and quick decision-making, as he shows no hesitation in threading the ball through open windows when opportunities present themselves.

Wanamaker will occasionally pick up an assist in transition or running a simple pick-and-roll, but pretty much none of his assists come off dribble penetration from isolation situations, as he's not one to break a defense down in the conventional sense. Not possessing a great first step and rarely exhibiting much in terms of advanced ball-handling, Wanamaker struggles to penetrate into the lane in general, whether it's looking to set up teammates or score on his own.

Where Wanamaker does most of his damage is from the perimeter, where he's a good jump shooter with NBA three-point range capable of hitting shots every which way: spotting up, coming off screens, or pulling up off the dribble. While Wanamaker is very efficient when left open and is capable of hitting tough shots in crucial situations, he's not without his flaws, as his mechanics are prone to break down when he's pulling up off the dribble, and he can even get sloppy with his form on spot-up shots as well. His lack of balance on many shots is his biggest problem, a big reason why he's averaging only a solid 39% from three as opposed to better.

Wanamaker also brings a solid mid-range game to the table on the offensive end, having a nice array of floaters and runners from the 10-15 foot range, which compensates well for his lack of ability to finish at the rim. On the rare occasion Wanamaker does find himself shooting around the basket, it's always the result of an off-ball cut or offensive rebound as opposed to any sort of dribble penetration. Wanamaker also does a good job moving off the ball in Pittsburgh's offense, running around screens to get open and helping his team maintain good spacing and run their plays.

On the defensive end, Wanamaker shows a good stance, focus, and has good fundamentals in general, usually playing up on his man and using his arms and hands well to contest shots and cut off passing lanes. Unfortunately, however, Wanamaker's lateral quickness is quite underwhelming, making him prone to being beat off the dribble in isolation, though he somewhat compensates for it with good positioning. Wanamaker likewise has trouble staying with shooters running around screens, just not having the quickness to consistently keep up.

Looking forward, Wanamaker has some nice skills in his shooting and superb passing ability, while his solid frame and high basketball IQ don't hurt either. His skill set would seem to lend itself well towards the back-up point guard spot in the NBA, but his liabilities defensively and with dribble penetration won't be easy to overcome. Players with this type of skill set usually don't last long unless they're elite shooters, and it's hard to put Wanamaker on that level at this stage, though it's certainly within his abilities to improve in that area, and it could be crucial for his future stock. He's made some very steady improvements over the last few years, and will be interesting to monitor to see how he continues to progress.
Read full article