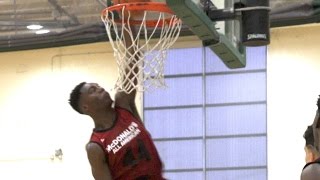 DraftExpress
@DraftExpress
Another big man who has appears to have measured differently is UNLV commit Brandon McCoy.  Measured here at 7'0.5 in shoes with a 7'2.5 wingspan at 250 pounds, McCoy has added a few pounds to his physically mature frame since this time last year and posted the largest wingspan of his career, which never hurts.  He's already almost the same size as Andrew Bogut was when he measured 7'0.25 in shoes with a 7'3 wingspan at 251 pounds at the 2005 NBA Pre-Draft Camp before being selected with the 1st overall pick in the subsequent draft.
Read full article

Weaknesses
-Average length relative to his height  7'0 wingspan. Shoulders aren't overly wide.
-Not all that explosive from a standstill, which when coupled with his average length, slightly limits his long-term upside as a rim protector and defensive rebounder.
-Feel for the game is a work in progress. Can do a better job of simplifying the game and playing within himself. Tries to put it on the floor in traffic. Takes contested jump shots early in the clock. Tries advanced moves in the post that he doesn't quite have the footwork to execute at this stage. Not the most willing passer  0.9 assists and 3.0 turnovers per 40.
-Overall skill level has room to improve  46.8% from two. Shows some potential as mid-range threat but doesn't fully snap his wrist. Hands can be shaky at times. Can improve his left.
-Poor fundamentals on the defensive end of the floor. Doesn't always get in a stance on the perimeter. Struggles to stay up and down as a rim protector. Reaches aimlessly.
-Can improve his awareness as a rim protector and defensive rebounder.
-Inconsistent motor. Goes into a rut when things don't go his way. Can do a better job of developing a next play mentality.

Outlook McCoy, a consensus Top 10 2017 recruit according to most scouting services, really struggled in Colorado Springs. Without elite length and explosiveness, and an average feel for the game, McCoy was unable to stand out on either end of the floor, and it was somewhat disheartening to see him respond to his struggles without much fire or resolve. There's no question there are some things to like about McCoy  he has natural size and strong frame at 244 pounds, he's very mobile for a 6' 11 big, he protects the rim and cleans the glass when motivated, and he shows flashes as a scorer in the half court. But with all of that said, McCoy's skills and consistency in the effort department will have to continue to grow as the level competition steepens and he can no longer rely as much on his natural size and physicality.

Like most bigs his age, Brandon McCoy isn't overly polished on either end of the floor, but for a near 7-footer with a strong base, tremendous leaping ability, fluidity running the floor, and good hands, the future is bright.

From a physical standpoint, McCoy has good size and a very strong lower body. His shoulders aren't overly wide, but his body should fill out nicely nonetheless. In addition to his natural size, McCoy can really run and jump, which shows both as a finisher and a rebounder. He plays with a solid motor to go along with his impressive physical profile.

McCoy does have a ways to go in terms of feel and overall basketball IQ, however. He's a bit foul prone, can be somewhat of a black hole and doesn't show the most natural touch on the interior. On the bright side, McCoy doesn't have a bad foundation as a free throw shooter. His mechanics aren't all that tight, but compared to most bigs his age, he has some potential there.

On the defensive end, McCoy has really good timing as a shot blocker and the mobility to be a very good pick and roll defender in time. He did get overpowered by more experienced bigs on a few occasions, but eventually made up for it by taking a charge the next play down. Overall, McCoy is an extremely intriguing prospect with outstanding athletic ability and some offensive upside to boot.
Read full article