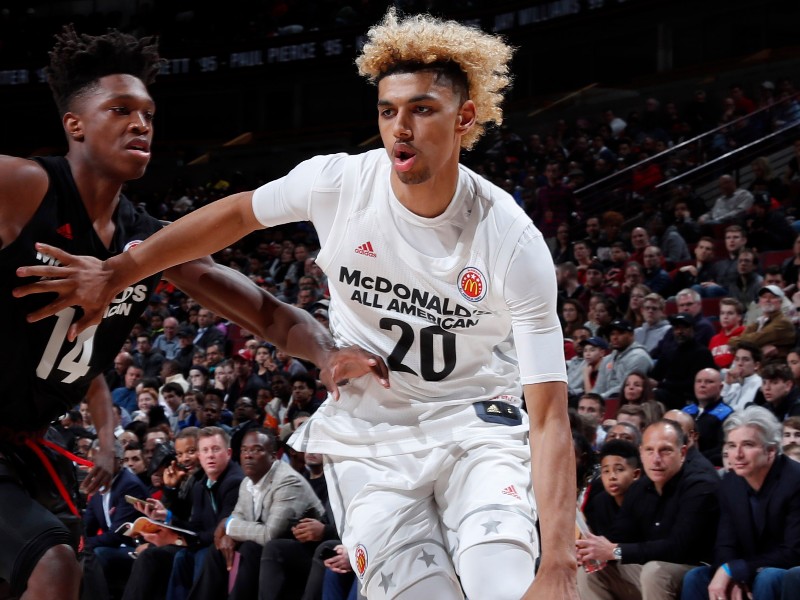 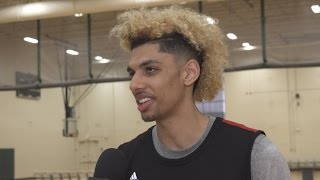 Mike Schmitz
@Mike_Schmitz
Brian Bowen, Saginaw, SF, Class of 2017, Uncommitted, 18.5 Strengths
-Nice size for a wing prospect at 6'7, 195 pounds. Fairly fluid. Can play above the rim off two feet in space. Has the size to play some small-ball four at the college level, especially if he can continue to add bulk.
-Strong scoring instincts off quick actions - 24.1 points per 40 minutes. Doesn't need to be a ball dominator in order to have an impact.
-Improving shooter who shot it really well all week in New York. Has some versatility as a shot maker. On balance, ball comes out smoothly. Good via spot ups, can shoot off screens, can make a pull up three if the defense goes under or a 1-2 dribble pull up if he's run off the line.
-Aggressive straight line driver. Fairly long strides to the rim in space
-Active off the ball. Will sneak in on the offensive glass. Good instincts as a cutter.
-Not a prolific passer, but knows how to play.
-Has instincts defensively. Rotates off the ball. Has decent feet.
Weaknesses-Average frame. A bit hunched up top. Body is a bit awkward. Struggles to play through physicality on both ends of the floor.
-Not all that explosive. Not going to play above the rim in traffic.
-Somewhat limited as a shot creator in isolations and pick and roll. High handle. Not going to change speeds or directions emphatically. Good pull up shooter in space but doesn't create much separation. Would benefit from adding more finesse finishes.
-Decision making can improve. Has a feel but plays with a score-first mentality. Will drive into traffic without much of a plan.
-Streaky shooter in the past - 22.6% from three on 84 attempts.
-Good not great length relative to his height - 6' 9 wingspan.
-Not quite a defensive stopper type. Can improve his ability to sit down and slide. Not overly physical.
OutlookThe unsigned senior wing had a tremendous week in Brooklyn, making shots in a variety of ways, scoring off of quick actions and competing on both ends of the floor. Bowen projects as an instant impact scorer at the NCAA level, depending where he ends up. He'll have to continue to improve his ball skills, frame, and overall shot creation versus higher level defenders, but Bowen proved he'll eventually have a shot at the NBA as a scoring wing after gaining more experience and developing physically at the college level.
Read full article