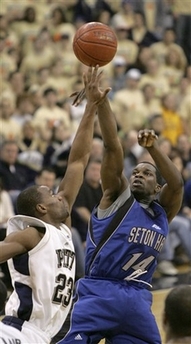 Joey Whelan
@DraftExpress
Brian Laing has turned heads since becoming the second leading scorer in the Big East conference behind Notre Dames Luke Harangody. While he is undersized as a perimeter player compared to most NBA wings, Laing is able to use his size, strength, and toughness to be a physical presence at the NCAA level. His ability to adapt to the shooting guard position is largely a mystery and is probably the most significant question that NBA personnel will have to answer during the draft process. While he has a good deal of work to do before he can be considered a sure-fire NBA prospect, Laing has shown a lot of positive improvements during this season.

On the offensive end, Laing can best be described as a power player. He is most effective in one-on-one isolation situations, where he can use his physical strength to bully his defender, and establish himself as a mismatch threat against bigger players at the power forward position. A majority of his offense in these types of situations comes from his evolving mid-range game. His mid-range jumpshot has some problems in terms of form, but there is no denying his quick release. When watching Laing shoot, it is remarkable that he is able to get his shot off at will considering that his mechanics are quite inconsistent at this stage. Sometimes, his form is deliberate and he does not shoot from the apex of his jump. Other times, it seems like he pushes his shot a little too much. All of these problems seem rooted in the fact that his form lacks a fluid singular motion. He shoots the ball well from the field (46.7% FG), considering he gets so much of his offense from mid-range jumpshots, but the inconsistencies in his form are exposed numerically in his 28.8% shooting from the perimeter.

Laing has a pure scoring mentality at this point, so it looks like he could become a very effective scorer from just about anywhere on the floor if he were to put time into improving his jumpshot. However, he must become a better shooter if he is going to attempt shots at such a high volume (15.3). He is not going to get 15 shots per game at the next level, so at this stage in his career, he must learn how to utilize his abilities in order to become a better and more efficient scorer. There is a place at the next level for players like Brian Laing, but he must continue to work on his offensive game so that he can best utilize a more limited amount of opportunities with the ball in his hands.

However, another area where Laing could really stand to improve lies in his ball-handling skills, which really limit his effectiveness. Considering his size and strength, he could be very effective as a slasher, taking his opponents deep into the lane or surprising them by cutting to the hoop and pulling up for a jumper. Nearly 60% of his shots come in the form of jumpers (with another 15% coming in the post), which is another testament to his shaky handle. Right now, he is deliberate with the ball in his hands, something that will be exposed at the next level.

Playing almost 38 minutes/game, he is not at all turnover prone. In fact, his 2.3 turnovers/game ranks him in the bottom half of prospects averaging 30+ minutes/game. For a player that is responsible for 22.4% of his teams possessions, the fact that his assist/turnover ratio is almost even and he averages only 2.3 turnovers/game shows how effective Laing is already. He still has a good amount of potential in his offensive game; it is up to him to maximize his abilities.

One thing that Laing does very well, however, is rebound the basketball. His 7.1 rebounds per game rank him in the top 10 amongst swingmen prospects, and in the top five in offensive rebounds per game at 2.3. His strength, toughness and technique boxing out opponents has been a big key for Seton Hall this year playing Laing out of position at power forward.

On the defensive end, Laing is solid, but unremarkable. He does a decent job of staying in front of his man, but lacks the quickness to become a lock down defender at any level. He does use his long arms well and does not give his man room to maneuver, but sometimes this results in him reaching too early, either drawing a foul or allowing his man to beat him to the basket. Laing must continue to work on using his physical gifts to his advantage on the defensive end like he utilizes them on the offensive end. He may never become a great defender, but he needs to improve if he wants to play at the next level.

Brian Laing has made some terrific strides over the past year to establish himself as one of the top scorers in the Big East. However, it is going to take much individual effort and improvement in order for him to continue along those lines and reach the NBA. While he is having a spectacular season, and one in which he is getting a lot of exposure, Laing will still need to go through the draft process, starting at Portsmouth, to show that his game can translate.
Read full article