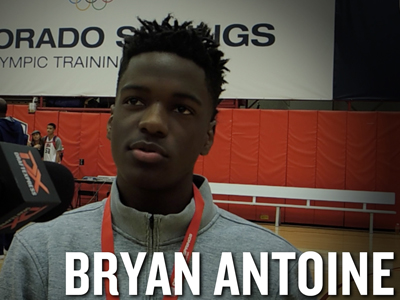 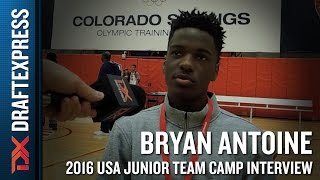 Matt Williams
@DraftExpress
Lewis's high school and UAA teammate Bryan Antoine has grown significantly since last summer. Sprouting up almost 2 inches to 6'5.5 in shoes with a 6'6.25 wingspan and a still light 169-pound frame, Antoine is a dynamic offensive player who may always be on the wiry side, but could become even more intriguing if he continues to grow.
Read full article

Mike Schmitz
@Mike_Schmitz
Like his high school and AAU teammate Scottie Lewis, 6' 5 two guard Bryan Antoine first caught our eye at the 2016 Under Armour Association in Los Angeles and continued his strong play at Steph Curry Camp in Walnut Creek as he cemented himself as one of the better long-term prospects in attendance.

Antoine fits the bill physically at 6' 5 with a developable frame, and above average length and athleticism, but it's his skill set, when combined with his tools, that separates him from other 16-year-old prospects. Antoine's best skill at this stage is his shooting ability, as he's a threat to knock down jumpers via spot ups, off ball screens and off the dribble. Although he can get off balance at times, Antoine has excellent mechanics and touch. The ball comes out cleanly and he shoots at the peak of his jump, the main ingredients that led him to score 1.35 points per possession off the catch (set shot) and 1.042 points per possession off the dribble (elevation-based pull up) in 11 Under Armour games. He can stop on a dime, rise and pull up going right or left and is much more than just a standstill shooter.

Antoine has a fairly polished handle for his age and is very comfortable playing with the ball, which he does quite a bit for his AAU team. He makes an effort to use Jamal Crawford-style hesitation dribbles and can change direction with crossovers or instinctual through the legs dribbles. It's rare to see a 16-year-old who can create space the ways that Antoine can, which bodes well for his long-term prospects as a scoring two guard who can play on or off the ball. His overall scoring instincts are extremely impressive and the fact that he's able to fill it up fairly efficiently (1.24 PPP in transition and 1.0 PPP in the half court) is a good sign moving forward.

The New Jersey product certainly has a score-first mindset, which gets him in some trouble at times going to the rim, as he can play with his head down, but he's also a fairly capable passer. He only turned the ball over on 9.6% of his possessions in 11 Under Armour games and showed some vision when he wasn't looking to get buckets. He can use his size to pass over the top of the defense, a useful skill given his ability to score playing out of pick and roll. Antoine does have room to improve his ability to finish around the rim, as the majority of his shots are jumpers. He can improve his ability to take contact around the rim.

On the defensive end, Antoine is fairly competitive and will pressure the ball, force turnovers or dive on the floor if necessary. His identity is more as a scorer at this stage but he certainly has the tools to be adequate on defense as he has nice size, length and footwork.

All in all there aren't a lot of holes in Antoine's game and he figures to be able to play at whatever school he'd like in time. High-level scorers with his physical profile aren't easy to come by, and Antoine is most a name to remember as he'll be on the national radar sooner rather than later.
Read full article