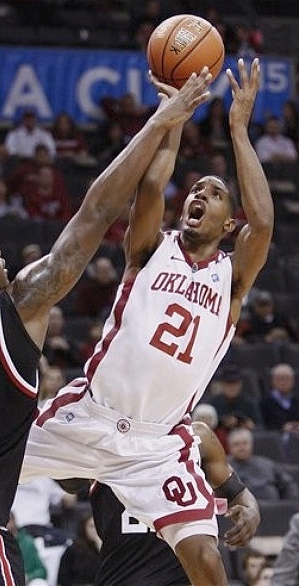 A top-40 high school recruit according to all the major scouting services, Cameron Clark was a significant contributor on an Oklahoma team that finished 2nd to last in the Big 12, ranking in the top five amongst all freshmen in minutes played.

Clark has strong physical tools for his position, showing solid size at 6-6, with long arms, a nice frame and very good athleticism.

Despite being on the court for extended periods last season, he played a fairly simple role offensively for OU, not being called upon for a great deal of scoring or creating, averaging under ten field goal attempts for every 40 minutes he played.

The overwhelming majority of his possessions came in spot-up opportunities, coming off screens, cutting to the rim and running the floor in transition. This is a role he played very efficiently, shooting over 50% from inside the arc and 37% from 3-point range, while turning the ball over less than any freshman prospect in the NCAA.

Clark's most reliable weapon right now is his jump shot. 81% of his field goal attempts were jumpers last year in fact, and he seems to have potential in this area, showing nice mechanics and a quick release, coupled with his good size. He isn't always consistent with his release point, particularly shooting off the dribble, but this is something he can polish up in time.

Where Clark will need to improve the most over the next few years is as a ball-handler. He rarely got to the free throw line last season, garnering just 47 attempts from the charity stripe in over 1000 minutes of action. While he does possess a nice first step, he struggles to change directions with the ball, being unable to use advanced moves and not showing much in the way of a left hand. When he does put the ball on the floor, he's far more likely to pull-up off the dribble in the mid-range area than make his way all the way to the basket, which makes him much easier to defend.

On the other end of the floor, Clark shows good potential, both with his physical tools and his effort level. He gets in a low, fundamental stance and shows solid intensity on this end of the floor, even if his lack of strength and experience made things difficult on him at times last season.

All in all, Clark is a fairly raw player who is still a year or two away from being discussed as a serious draft prospect. He showed some intriguing flashes of talent as a freshman, though, which when combined with his nice physical tools and the typical incremental improvement you see from players this age, could make him into an interesting player down the road.
Read full article