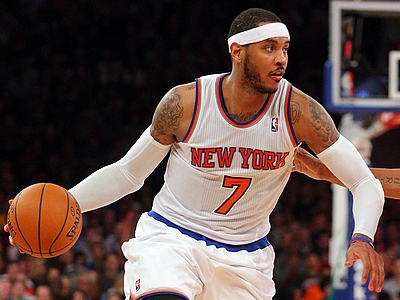 Mike Schmitz
@Mike_Schmitz
Analyzing the strengths and weaknesses of one of the most coveted free agents on the NBA market, Carmelo Anthony. Is he worth the hoopla that surrounds him and can he justify a 24-26 million dollar contract per year?

Matt Williams
@DraftExpress
Overview: An elite offensive talent who will go down as one of the best offensive players of his generation. Possesses excellent size and strength for a small forward, to the point that he can legitimately play the four for stretches. Shows a very quick and powerful first step and great leaping ability. Not an incredibly high leaper, but gets off the floor quickly and has a great second bounce. Doesnt always run the floor as hard as hes capable of. An extremely versatile scorer. Will take his man off the dribble and knock down the mid-to-long-range jump shot against slower defenders or go to work in the post against smaller ones. Doesnt always have the best shot selection, but is one of the most prolific scorers in the League. Rebounds the ball at a very good rate for his position. Wont make much of an effort defensively. Was arguably the highest touted recruit in the country coming out of Oak Hill Academy. Had one of the best freshman seasons in NCAA history. Led Syracuse to the NCAA Championship in 2003. Was a steal for Denver at the third overall selection. Has been one of the elite offensive players in the NBA from his rookie season. Two time All-Star with many, many more to come. Has found himself in the news periodically for various off the court issues. Needs to dedicate himself defensively, continue to work on his conditioning and improve his commitment to playing winning basketball to solidify his legacy as one of the greats.

Offense: Gets roughly half of his touches from a combination of isolations, post ups and fast breaks, but scores most of his points in two distinct ways: dunking and taking shots from just inside NBA three-point range. Possesses both great finishing ability and an impressive outside shooting stroke. Has a very quick release and elevates over defenders effortlessly to get off shots while defended. Releases the ball quickly, and fades away naturally, making his shot very difficult to block. Ability to get his shot off in any situation leads him to take shots that most players wouldnt be able to. Not as strong a three point threat, although has improved that part of his game recently. Capable of hitting shots off the dribble, but he has a tendency to fall in love at times with these low percentage shots. Shows very impressive ball handling ability for a player his size. Uses as many jabs or dribbles as he needs to set his man up. Able to drive in either direction, but is more effective going left. Uses a lot of in and out moves to set his defender up before lowering his shoulder and powering to the rim. Likes to initiate contact and move his defender rather than turning the corner. Will post up in the midrange, and tends to go to his post game when he feels he can take advantage of his matchup. Has some very impressive post moves. Likes to take one dribble left into his defender and then spin back to the right and shoot. Draws a lot of fouls in that fashion. Gets the vast majority of his touches on the left block, allowing him to avoid help defenders when making that spin. Will work off his right shoulder periodically, using a drop step to gather himself before elevating for a jumper. Tends to use his power moves to get into traffic to draw fouls. Shoots a high volume of free throws, and knocks them down at a good rate. Takes on a very high degree of difficulty with some of the shots he takes. Not great at moving without the ball in half court sets, but will float to the rim when his man helps off him. Leaks out in transition to get easier looks at the rim. Will try to dunk everything at the rim. Capable of finishing with contact, but usual finds himself with a lot of room to work at the basket. Often the beneficiary of good dump-off passes by his teammates. Doesnt bring much to the table as a passer, and simply isnt going to give the ball up in most situations. Will turn the ball over a few times in the course of the game since he tends to over-dribble at times and will make some bad decisions when he tries to move the ball when he gets cut off. One of the league leaders in turnovers per game annually. Contributes on the offensive glass by grabbing quite a few of his own misses, but doesnt crash the boards when hes out on the perimeter. Doesnt play the most fundamental offensive game, preferring to play one-on-one and take tough shots, but is surprisingly efficient nonetheless.

Defense: Offers very little on the defensive end. Doesnt hustle back on defense, and is often one of the last players back. Can stay in front of good ball handlers for a time, but isnt able to change directions quickly when hes forced to move laterally. Closes out too high, making it easy for slower defenders to move past him to the rim. Will sell out on steal attempts. Takes a lot of risks to force turnovers. Will bait players into making bad passes, but is a defensive liability on the perimeter. Has the strength to be a solid post defender, but tends to just foul shooters rather than try to defend their shots. Will get in foul trouble from time to time for this reason. Starting to spend more time defending the paint, leading to improved production as a rebounder. Will get down and box out, but not always. Pursues the ball off the rim, and shows great anticipation and explosiveness when cleaning the glass. Needs to show better defensive intensity and discipline.
Read full article