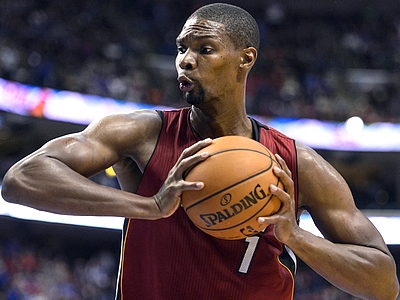 Mike Schmitz
@Mike_Schmitz
Analyzing the strengths and weaknesses of unrestricted free agent Chris Bosh, one of the best big men available on the market.

Matt Williams
@DraftExpress
Overview: An extremely long and athletic young power forward who needed little time to develop into a franchise caliber player. Has great size and a big wingspan for the power forward position. Not physically built, but has put on some weight since entering the League. Possesses elite quickness and leaping ability for a player his size. Brings a lot to the table on the offensive end, as he is terrific at creating his own shot. Can score from all over the place. Doesnt have the bulk to be a great defender, but is a factor due to his length, quickness and leaping ability. Used one very productive year at Georgia Tech to propel himself to the top of the lottery. Garnered the Atlantic Coast Conference Rookie of the Year Award for his efforts. Took little time to acclimate to the NBA level. Would have been a candidate to with the NBA Rookie of the Year Award if he were in another draft class. Needed only two seasons to become an elite talent. Three time All-Star with many more on the horizon. Still has some things to work on, but his age and work ethic gives him some potential despite his experience level.

Offense: One of the games best young post scorers. Gets about a quarter of his shots up from post ups with another fifth coming from each of spot ups, pick and rolls, and isolations. Has a decent left handed jumper that he can shoot with consistent range out to around 22-feet. Not a great catch and shoot option, but improving slowly. Has dramatically improved his ability to hit shots off the dribble. Still has some room to improve his jumper. Doesnt have to rely on his jumper due to his tremendous quickness. Able to beat his man off the dribble regularly. Pretty good ball handler for a player his size. Tends to drive all the way to the rim rather than pull up when he puts the ball on the floor. Isnt terribly effective when he gets cut off. Gifted post player. Likes to take turnarounds over his left shoulder and go to his hook over his right. Tends to get most of his touches on the right block. Length and quickness lets his get a ton of separation when he spins off his man at the rim. Has some nice up and under moves. More of a face up threat than a traditional back to the basket player. Has no trouble beating his man to the rim when he turns to face. Will create a lot of match-up problems with his quickness. Great finisher at the rim when hes not posting up. Loves to dunk in traffic. Doesnt finish with contact consistently, but wont hesitate to try and get to the line. Shoots a ton of free throws and knocks them down at a very high rate. Ability to get to the line and foul shooting is what makes him so productive. Length makes him a good offensive rebounder. Turns the ball over when he gets too loose with the ball on his drives. About average as a passer. A very prolific option who should be a mainstay amongst the Leagues top scorers at the power forward position. Still can refine his offensive skill package to some degree, mainly by improving his efficiency from the field. Improving his range.

Defense: A capable post defender that can do some nice things on the block. Has the ability to step out and effective defender almost any post player when they face up or catch the ball out on the perimeter. Matches up much better with power forwards who prefer to set up on the outside. Has great lateral quickness for a player his size. Can hedge screens effectively and guard many players when forced to switch. Will get roughed up by back to the basket centers. Has a very hard time holding position due to his lack of size. Isnt forced to bang as much as he used to with Jermaine ONeal around. Will stay with his mans post moves getting some blocks on the ball, but also committing some fouls. Rebounds the ball and block shots at a respectable rate, but isnt a major standout in either. Needs to show better anticipation when coming over from the weakside. Has cut down on his fouls significantly over time, but may never be strong enough to be a consistently effective defender.
Read full article